We get astride Yamaha’s first ever full-faired Fazer, which also happens to be made in India, to find out if it’s got the goods to be an efficient tourer 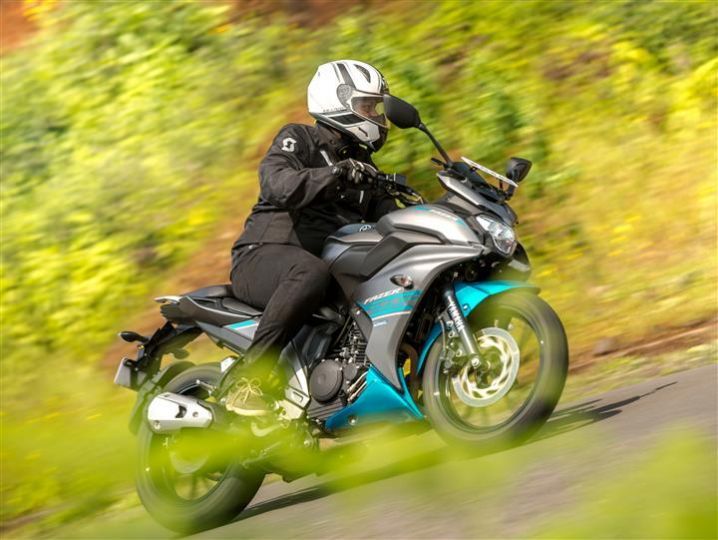 Launched earlier this year, Yamaha’s FZ25 - a 250cc take on the company’s popular FZ series - has proven itself to be a good blend of both performance and everyday usability. And as is the company’s tradition, a half-faired version of the same was bound to follow. Which it did. Sort of. Well you see, while the bike in question retains the nomenclature reserved for chopped-off semi fairings, its design is anything but compliant with this philosophy. Yes, this is the first bike ever made by Yamaha (both locally and internationally), that carries the Fazer name yet sports a full fairing. Why? We can only guess about the company’s reasons to break tradition, but bikes carrying this venerable title have always denoted a strong touring focus. So the more important question is, does this new Fazer 25 deliver on that front?

In terms of styling, it’s a bit difficult to pin down this bike’s polarising looks. While I think it isn’t too attractive - unusual, maybe -, considering the otherwise handsome designs Yamaha has offered over the years, there are others who might just be impressed with it. The reason we are not big fans of the way it looks is that it almost seems that the designers have tried to mould the front apron and windscreen around the existing LED headlight of the FZ25 - a half-hearted effort to be honest. Now, you might think this is a bit too harsh, but the bike does look a lot more palatable in photographs than it does in person. Fans of full-faired motorcycles, however, should appreciate the mass-forward design that offers some visual bulk, when viewed in profile.

That said, the dual-colour paint-scheme is used quite well here. The remainder of the bike is clearly identical to its naked sibling. Like the FZ25, you get LED headlamps, but now they’re flanked by additional LED DRLs on the fairing, whereas at the rear, the LED tail lamp remains the same. The LED unit does well to brightens the night, with a wide, useful spread on low beam. The high beam though could have been better, as it feels more like a small spotlight. The all-digital instrument console is clearly legible and offers all the basic readouts including immediate and average fuel efficiency. However, it misses out on a gear position indicator. The broad mirrors placed on long stalks, even though a bit out of proportion, provide a clear view of what’s behind.

Switchgear quality is up to Yamaha standards, but surprisingly the pass light switch has been moved from its traditional place and has been integrated into the high-low beam switch, which will take time getting used to. The paint finish is top notch and the bike feels like it’s well put together. However, the panels themselves feel a bit flimsy.

The Fazer 25 comes with the same heart that beats within the FZ25. The power output of 20.9PS is produced at 8000rpm and peak torque of 20 Nm is produced at 6000rpm. It’s equipped with a  five-speed gearbox, which offers positive shifts. But the shift action has a firm feel, making it slightly cumbersome to find neutral.

Keep the bike in low revs and it can actually feel a little sleepy, even throwing up a judder or two at slow speeds. However, the mid-range pull is strong once you get the motor going, and you realise that it’s more ‘sleeper’ than ‘sleepy’. With the extra 6kg weight,  that this tourer carries strapped to its front in the form of that fairing, it’s marginally slower than the FZ25, sprinting from 0-60kmph in 4.11 seconds, while the 0-100kmph sprint takes 10.86 seconds, clearly indicating the pros and cons of the short gearing.

Shorter ratios also mean that the Fazer is a fun to ride motorcycle in the city, with the motor being fairly tractable. We were able to ride at 30kmph in 4th gear, without a fuss. This flexibility was also confirmed by the roll-on figures. In third gear, the Fazer manages a 30-70kmph run in 4.80 seconds, while the 40-80kmph run in fourth gear takes 6.20 seconds.

The short-ish gear ratios also let the engine run at as high as 6,500rpm while cruising around 100kmph in 5th gear. Unfortunately, this isn’t ideal for a touring bike, as a strained engine will put you off from riding longer distances. A 6th cog would’ve been more than welcome here. The discomfort is further enhanced by the amount of vibration felt at the foot pegs, with even the mirrors blurring out at this speed, although the handlebars feel slightly isolated from these vibes.

The riding position is similar to the FZ25, with slightly rear set footrests and a relatively flat and wide handlebar, offering an upright posture that’s comfortable for long hauls. Apart from the large knee recesses on offer, the tank also gets recesses on either side on top, which helps accommodate the wide handlebar, aiding hassle-free U-turns. Furthermore, the split seats offer just the right amount of padding, which should make spending multiple hours in the saddle is a breeze. Pillion comfort is good too, with the large rear seat feeling quite accommodating. with the large grab rails feeling very usable.

The Fazer 25 has a kerb weight of 154kg, which is 6kg more than the FZ25 and the added weight can be felt slightly when throwing the bike around corners. Similar to the FZ, it tips into corners quite quickly but picking it up again and transitioning from one turn to another in quick succession takes some effort. The upshot of this is a more stable feel through corners. However, much like its naked twin, the Fazer 25 feels like another case as the dynamic chassis is held back by rather pedestrian tyres. The MRF Nylogrip 100/80-section tyre up front and 140/70-section at the rear can be defined as average at best. Both these non-radial tyres do not offer much in the way of feedback when leaned over. But for everyday use with occasional highway runs, they should do just fine.

In the city, the additional weight is hardly noticeable and the Fazer 25 is easy to handle and manoeuvre through traffic, with the tight turning radius further aiding its ability.

In terms of suspension setup, the 41mm front forks and rear monoshock are set a bit on the stiffer side. You can certainly feel the bumps and potholes you put the bike through, but very little actually seems to upset the bike’s orientation.

Braking is taken care of by a Bybre powered 282mm front disc and a Nissin powered 220mm rear disc, with no ABS available, even as an option. The front brake has decent stopping power, but it really lacks feel, requiring a big squeeze of the right lever to dial up the adequate bite. This really numbs down brake feel, making it very tricky to give precise brake inputs. The rear brake on the other hand barely feels like a disc setup, requiring a massive stomp on the pedal to elicit any reaction from the backend. The Fazer 25, due to its added weight, covers a longer distance when compared to the FZ25. Thanks to the vague brakes, 80-0kmph was achieved in 32.19 metres, while 60-0kmph was covered in 18.58 metres, during our tests.

Well, the added fairing surely gives the Fazer 25 the big bike feel, bearing in mind that the front end isn’t conventionally handsome. But during our tests, the bike did draw a lot of attention from onlookers and people riding alongside asking about the bike’s price and availability. So maybe that could be considered a win for Yamaha India.

However, that fairing only adds extra weight, which seems to have impacted performance and efficiency, though just marginally. And honestly, that fairing doesn’t even do that great a job of cutting through the air, owing to its short height.

The mechanical components and ergonomics are solid though, and knowing Yamaha’s penchant for building reliable motorcycles, the Fazer should be bullet-proof to that end. - with the bike being able to manage hauling duties for years on end.

Priced at Rs 1.29 lakh (ex-showroom), the Fazer 25 doesn’t feel like much of a bargain. It’s a full Rs 10,000 more than the naked FZ25. We would recommend the Fazer only if you’re thoroughly enamoured by full fairings, although in that case, the Bajaj Pulsar RS200 can be had for a fairly insignificant premium.  and that too with ABS. However, for all accounts and purposes, the FZ25 does everything that the Fazer does, sans giant plastic fairing, so we think it’s the wiser choice in this scenario.