Introduction of new variants were the major highlights this week 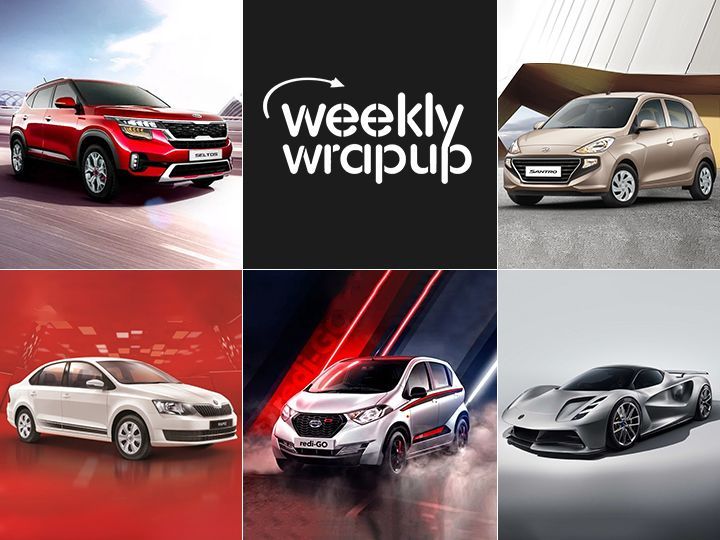 Over the past seven days, the automotive industry has seen some interesting action. Kia officially opened bookings for its highly anticipated SUV, the Seltos, and boy, has it raked up a number that’s actually eyebrow-raising. Skoda launched a limited Rider Edition for the Rapid and gave it a mouth watering price tag. Hyundai and Datsun did a variant rejig for their entry-level models, the Santro and redi-GO, and last but not the least, British carmaker Lotus has dropped the most powerful hypercar ever made and it's called the Evija.

Kia India has officially started accepting bookings for its debut product, the Seltos. Bookings are accepted through the manufacturer’s online portal or through the 206 sales points across the country for a token amount of Rs 25,000. And if you’re interested in getting one, be prepared for a long wait as the number of bookings it has raked on its first day might actually surprise you.

Skoda Rapid Rider Edition Launched; Should You Buy It?

Skoda India had launched a limited ‘Rider Edition’ for the Rapid sedan. Based on the lower-end Active variant, the special edition model features cosmetic enhancements inside out. The fact that it isn’t poorly equipped might just seal the deal as the main highlight here is the pricing.

Hyundai Santro Gets A Base-spec Variant:

Hyundai had launched a new variant of the Santro. Christened the Era Executive, it replaces the Dlite and Era variants. Apart from that, to make the Santro a more value for money offering, Hyundai has added some features to the mid-spec Magna and Sportz trim levels. What does the Era Executive variant pack and has the revision to the Santro’s feature list affected the prices? We answer it here.

Datsun India had updated its entry-level model, the redi-GO. The model now comes with standard safety features like ABS with EBD, driver airbag, rear parking assist sensor, high speed warning and seatbelt reminder. The variant line has also been chopped down to five. Along with the updates, the redi-Go lineup has indeed become a tad bit more expensive, but not all of them, as select variants have become cheaper as well.

Lotus is all set to smash world records with the all-electric Evija Hypercar. Being the first new product from the manufacturer post its acquisition by the Chinese automotive giant Geely, the Evija will be the most powerful production-spec car when it goes on sale in 2020. Let us tell the stats. The Evija can sprint to 100kmph under 3 seconds and pedal to the metal it reaches 320kmph. To top things up, if you have a charging source that can produce 800kW of power, you can fully charge it in 9 minutes. We guess your question must be ‘How much power does this damn thing make?’ Find that out here.