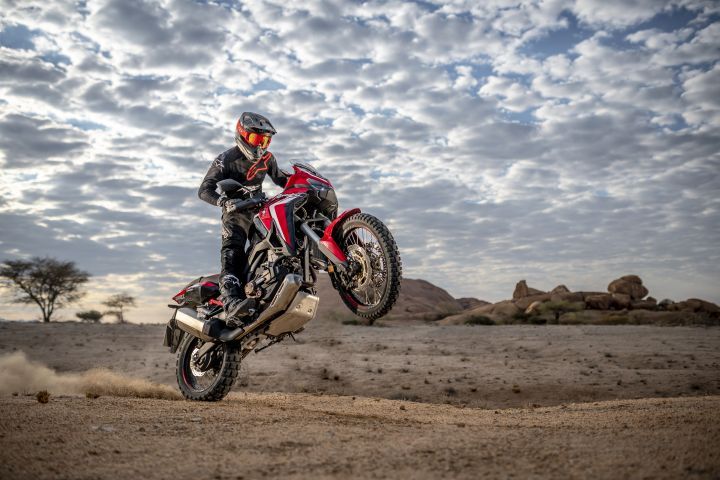 With stringent Euro norms coming into effect from 2020, motorcycle manufacturers have had to resort to increase in cubic capacity to offset the lowered power-to-weight ratio. And that’s exactly what Honda has done with the new CRF1100L Africa Twin. But in addition to that, Honda also has a few tricks up its sleeve to make the new Africa Twin not only more powerful but also lighter than before.

Getting to the biggest change in the new Twin: the 1084cc parallel-twin engine. Honda has cleverly managed to meet Euro 5 norms by increasing the stroke length of the previous 998cc mill. Hence, this increment in cubes has seen a bump up in power from 95.2PS to 102PS. Peak torque rating -- which is now made at 6250rpm, 250rpm higher than before -- has also gone up from 98Nm to 105Nm. Manual as well as DCT options will continue to exist abroad but India will only get the latter transmission option.

Electronic aids like throttle-by-wire and Honda Selectable Torque Control (HTSC, Honda lingo for traction control) are still found well and present but there’s a big difference: These two aids are now controlled by a six-axis IMU for better control. Another big electronic update is the three-level wheelie control, including a mode where you can switch it off completely.

Honda’s engineers have made use of its Dakar exploits by making the semi-double cradle chassis stiffer and lighter than before. For instance, the new bolted-on aluminium subframe is slimmer than the previous welded-on structure. With a wet weight of 236kg in its DCT avatar, these changes have made the new bike 6kg lighter than before.

Thanks to the new bolted-on chassis, the saddle height on the new Africa Twin has gone up from 820mm-840mm to 850mm-870mm. While this does reduce the bike’s accessibility, Honda claims to have narrowed the seat by 140mm to allow easier control.

There are no changes in terms of suspension components from Showa or Nissin braking hardware from the older bike. However, revised spring rates are to be found on the 45mm USD fully adjustable fork as well as on the preload- and rebound-adjustable monoshock. Twin 310mm discs with radial calipers still handle braking responsibilities on the front 21-inch wheel while the rear 18-inch wheel gets the same 256mm rotor with a single-piston caliper. Dual-channel ABS with the option to switch off intervention on the rear wheel comes standard.

The new Africa Twin also looks a bit angrier than before thanks to the new twin circular LED headlamps and shorter windscreen. Wind deflection could be an issue but we will have to wait to get our hands on the bike to know for sure. The CRF1100L gets a small LCD panel, above which there is a new 6.5-inch colour TFT touchscreen display. Aside from its usual data-relaying duties, this touchscreen also gets Apple CarPlay.

There is a larger ‘Adventure Sports’ version of the Africa Twin too which gets a larger fuel tank, optional electronically adjustable rear monoshock and wire-spoke rims fitted with tubeless tyres. Sadly, we do not believe this version will be coming to India.

The good news is that Honda will be selling this Euro 5-compliant Africa Twin in Europe this year itself. This means that we could be welcoming this new bike in India by the end of the year or early next year. With these updates, expect the new CRF1100L Africa Twin to be priced at Rs 15 lakh, ex-showroom India. Could this be the India’s first BS6-compliant big bike to go on sale?