Are we going to see the baby Panigale in India this year? 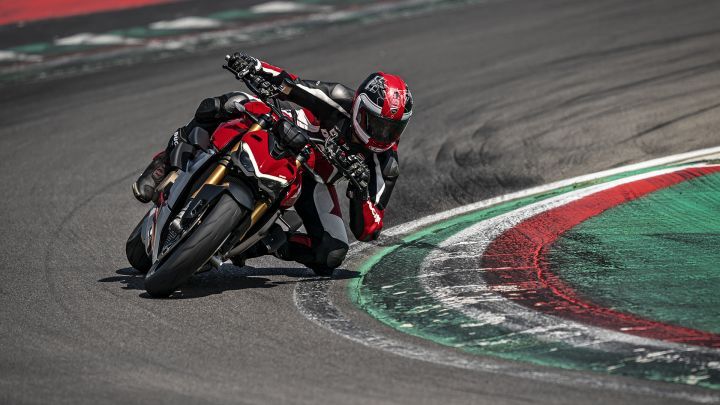 Last year, Ducati unveiled a whole range of updated motorcycles, including the mad Streetfighter V4. But 2020 is going to be even more insane as there are reports that Ducati might unveil the Multistrada V4 and the Streetfighter V2. Now, there’s still some time for Ducati to officially launch these motorcycles in India. But what does the Italian bike maker have in store for us this year? Read on to find out.

Ducati entered the litre-class naked motorcycle segment with a bang. The Streetfighter V4 is an absolutely mental piece of machine with 208PS on tap and a dry weight of just 178kg. But if you are one of those who want more “Powahh”, then Ducati offers an Akrapovic performance exhaust that sheds 6kg off the motorcycle’s weight and bumps up the power to 220PS. It gets the same set of electronics as its fully-faired cousin, the Panigale V4. So you get a 6-axis IMU-assisted traction control, slide control, ABS, launch control, wheelie control, engine brake control and a bi-directional quickshifter. Ducati is yet to launch the Euro 5/BS6-compliant version of the Streetfighter V4, but we expect it to be introduced in the coming months.  Ducati’s flagship naked motorcycle is expected to be priced around Rs 17.5 lakh (ex-showroom). Head here for more details on the Streetfighter V4.

Ducati also unveiled the 2020 Panigale V4 last year, which now get the same aerodynamic package as the V4 R. Ducati claims the winglets offer up to 30kg of downforce at 270kmph. Apart from this, Ducati  has also tweaked the throttle maps for a more linear power delivery and the suspension is now on the stiffer side to improve the bike’s handling in corners. The current-gen Panigale V4 is loaded with rider aids such as cornering ABS, wheelie control, launch control, bi-directional quick shifter, and more. But the 2020 models get Ducati’s EVO 2 traction control, which the company says will improve the bike’s handling in corners. Expect the 2020 iteration to cost around Rs 1 lakh more than the current model, which retails at Rs 20.53 lakh (ex-showroom).

The Panigale V2 is the only motorcycle in this list which is Euro 5/BS6-compliant. The baby Panigale looks similar to its big brother, the Panigale V4. But underneath the chassis, there are some differences between the two. For instance, it gets the same monocoque frame as the 959 but Ducati says that it has tweaked the chassis to make it more agile. So how well does it ride around a race track? Well, who better to answer this question than Shumi? There’s no word from Ducati India yet about its launch, but we expect it to come to our shores by mid-2020 bearing a price tag of around Rs 16.5 lakh to Rs 17 lakh (ex-showroom).