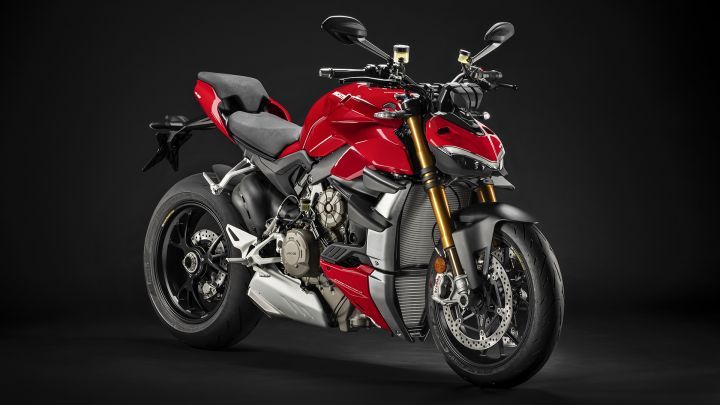 When it was introduced, the MV Agusta Brutale 100 Serie Oro with a mammoth 211PS stood in a class of its own as the world’s most powerful production naked bike. It now has company from a fellow Italian manufacturer, with Ducati introducing its Streetfighter V4. In essence, this is a stripped down, naked version of the Panigale V4, the motorcycle that currently is the benchmark in the superbike segment.

The Streetfighter is being offered in two versions: the standard Streetfighter V4 and a higher performance S version with some extra goodies. While the standard variant has to make do with just an upside-down 43mm Showa Big Piston Fork and Sachs Monoshock, both fully adjustable, the S variant gets electronic suspension as well as an electronically adjustable steering damper from Ohlins. Also exclusive to the S variant are Marchesini forged aluminium wheels which reduce the unsprung weight and rotational inertia.

The 90 degree V4 Desmosedici Stradale motor has been carried over from the Panigale and is common to both variants. It produces an eye-watering 211PS and 123Nm in the Streetfighter. However, being a naked streetfighter, the engine has been tuned for better road usability. As a result, the Streetfighter has been given a stronger mid-range and a shorter final drive ratio. There is 14% more torque on offer at 100kmph in 3rd gear than the Panigale V4.

While the MV might be able to match the Streetfighter on power output, it can’t do so on weight, with the S version of the Streetfighter tipping the scales at just 178kg dry. In comparison, the Brutale's dry weight is 185kg. If all this still doesn’t satisfy your appetite, an Akrapovic exhaust system is available as a track-only accessory, which boosts output to 223PS and 130Nm while simultaneously shaving off 6kg.

In terms of design, the Streetfighter employs a minimalist approach, with body panels few and far between. One of the first things you will notice, though, are the biplane wings on either side of the motorcycle. These have been developed with Ducati Corse, the brand’s racing division, and claim to produce 28kg of downforce at 270kmph, helping keep the front wheel planted on the road at high speeds and also improving braking stability. The low-set twin projector LED headlights look mean, and have some very attractive LED DRLs acting as brows. While there is no real belly pan as such, there are a couple of small body panels placed behind the oil cooler.

The Streetfighter has been given more road-friendly ergonomics, with the Panigale’s low clip-ons making way for a wide, flat handlebar. The footpegs seem to be quite high-set, though, and the overall riding position should be fairly forward-inclined. Comfort has been taken into consideration, with the rider’s seat getting 60mm of foam and set 25mm lower than it is on the Panigale. The tail section is extremely minimalist and looks like it has been lifted straight off the Panigale, with the two vents present as well.

Another straight lift from the Panigale is the electronics package, with the Streetfighter getting the whole shebang. The suite includes 6-axis IMU-assisted traction control, slide control and ABS, along with launch control, wheelie control, engine brake control and a bi-directional quickshifter.

The Streetfighter in its current Euro 4-compliant guise will be available in Italy from March 2020 onwards in markets abroad. Prices in Italy start at €19,990 (approx Rs 15.76 lakh) for the standard variant, with the S priced at €22,990 (approx Rs 18.12 lakh). However, the Panigale V4 is sold for €23,490 (Rs 18.50 lakh lakh) in Italy but Rs 20.57 lakh (ex-showroom, Delhi) in India. Applying the same percentages, the standard variant of the Streetfighter V4 could cost Rs 17.5 lakh (ex-showroom) in India. A Euro 5-compliant model will follow soon afterwards, since the updated emission norms come into effect from 2021 onwards in Europe. In India, however, BS6 emission norms take effect from 1 April next year, which means Ducati cannot introduce the Euro4 version of the Streetfighter here, and we will probably have to wait for the Euro5 update.