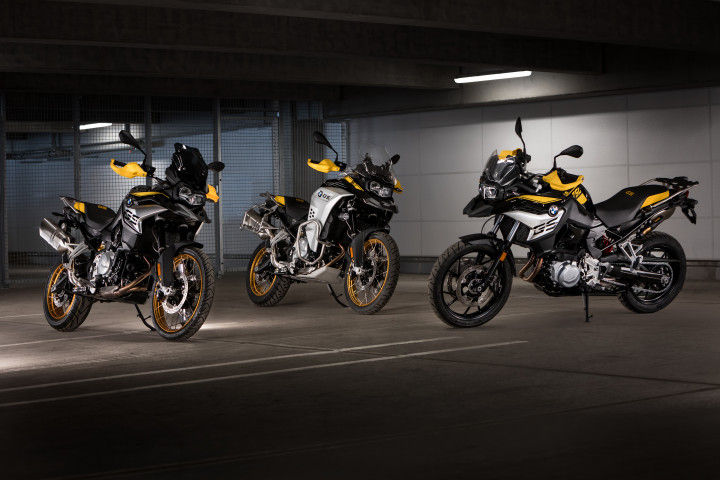 It is 40 years since the first Gelande und Strasse or GS letters adorned the sides of a BMW motorcycle. While it has primarily been a series of large boxer twins, in recent times we have got parallel-twin models as well as a single-cylinder GS, which is manufactured right here in India. To commemorate the 40th anniversary of the GS family, and also update them to Euro 5 emission norms, BMW Motorrad has introduced a new livery on the 2021 F 750/850 GS models called the ‘40 Years GS Edition.’

The special livery is kind of similar to that found on the 2019 GS Trophy’s F 850 GS Adventures. The black, yellow and silver colour scheme looks quite enticing, especially on the 850 models as the two hard-core options also get yellow wire spoke rims. The bikes also get new colours schemes aside from this special one. The F 750 GS now arrives in Light White (white with little specks of red and blue) and Sports Style (blue and silver body panels with grey rims). The Racing Red and Rallye colours are offered on the F 850 GS while its Adventure trim is also offered in an Ice Grey scheme.

One of the biggest changes on the 850 models is the presence of a larger windshield which is height adjustable. One of our gripes with the earlier model was that the windshield offered was a bit too small and didn’t deflect wind that effectively, creating a lot of whistling sound inside the helmet. Hopefully, this new windscreen should solve that issue.

Also on the 850 GS bikes, the excellent colour-TFT screen is now standard, that means you will no longer need to shell out close to Rs 60,000 to get the fancy bit of tech. Sadly, the F 750 GS will have to make do with a semi-digital dash and you will have to spend that bit extra to get the TFT screen. The LED headlights have been slightly redesigned. New bits also include LED turn indicators and USB charging ports as standard.

Powering the bikes is the same 853cc parallel-twin engine as found on the older bikes. We hoped that BMW would up the displacement and kit these bikes with the same 895cc motor that it introduced on the F 900 R and F 900 XR. Nevertheless, the good bit about sticking around with the 853cc engine is that there have been no power losses in its Euro 5 trim. The Euro-spec F 750 GS still makes 77PS and 83Nm while the engine still puts out 95PS and 92Nm on the F 850 GS and F 850 GS Adventure. The India-spec bikes were earlier detuned so as to be able to run with our poor quality fuel but since there will only be BS6 fuel available across the country now, we do not expect any detuning to take place this time around.

The electronic suite was already quite exhaustive but now all three of these GS models get ABS Pro and Dynamic Traction Control (DTC) as standard. Earlier, these were exclusive to the Pro models of the bikes.

The foundations of all three bikes remain the same. The F 750 GS still gets a conventional fork while the 850 GS models each get a USD fork. The road-biased 750 has to make do with 19-/17-inch alloy wheels while the 850s get 21-/17-inch wire spoke tubeless rims.

Expect BMW Motorrad to launch the new F 750 GS and F 850 GS models by the end of the year. The prices of the 750 variants are likely to remain the same, starting from Rs 11.95 lakh onwards. The F 850 GS and F 850 GS Adventure might see a small hike in prices, with the standard models likely to bear a price tag of Rs 13.30 lakh and Rs 15.80 lakh, respectively. All prices, ex-showroom India.