Audi India Is Doing A Portfolio Revamp And We’re Getting NINE New Cars!

After going silent in India for a while, Audi India is looking to come back to winning form and will introduce nine all-new models including sedans and SUVs in quick succession starting from the end of 2019 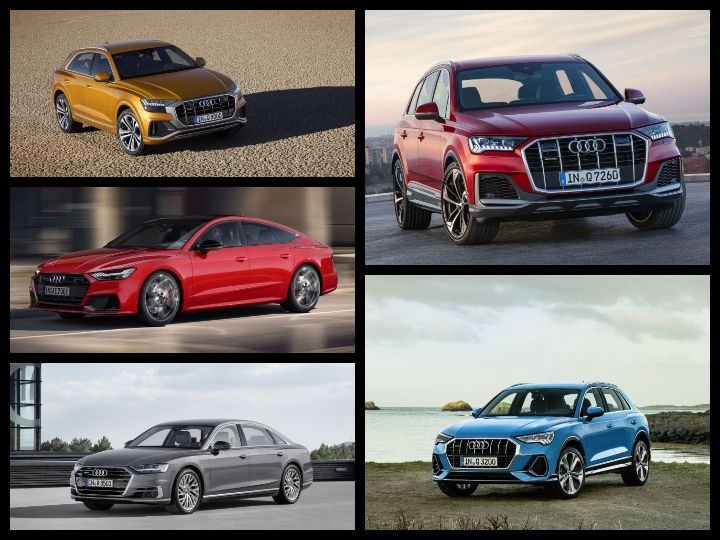 We all know that Audi India has been silent for a while and there were only a couple of special editions for more than a year. In this gap, Mercedes-Benz and BMW, the Ingolstadt carmaker’s main rivals, have taken full advantage by offering new models and racking up sales. To cover the lost ground, Audi will be launching nine new models in quick succession, starting with the new 2019 A6, that’s recently launched at Rs 54.20 lakh. The upcoming models will come packed with Audi’s latest technology and also feature BS6-compliant powertrain options. In fact, Audi aiming to regain its standing in India’s luxury car market. Models that are slated to hit include the ever popular 2020 Q3 SUV and the futuristic e-tron electric vehicle (EV). Let’s have a look at all the models that are headed to your nearest Audi showroom starting end of 2019 in detail:

The Q3 compact luxury SUV, Audi’s bread and butter model, is all set to get a generational update in India in 2020 after it was globally unveiled in 2018. The second-generation Q3 is bigger than the model it replaces and has a more evolutionary design with sharp lines and creases. Inside, it comes with a new dashboard that’s dominated by the Virtual cockpit and the 10.1-inch touchscreen infotainment system.

The Q3 is expected to come with a BS6-compliant petrol engine at launch, probably the 2.0-litre TFSi engine that develops 190PS of power and 320Nm of torque. It will send power to all four wheels and a 7-speed DCT is expected to do duty. The tried and tested 2.0-litre TDI engine is expected to join the lineup later. The upcoming Q3 is expected to be launched by the first half of 2020. Considering the updates, it will be priced more than the current model’s Rs 34.75 lakh price tag (ex-showroom).

The current Q7 hasn’t been well received in India thanks to its station-wagon looks. Audi will be changing that with the 2020 Q7 facelift that looks more SUV. Its interiors are revamped and features Audi’s latest twin touchscreen central console. Some nifty features include connected-car tech, navigation via Google earth, Audi’s Virtual cockpit, Bang and Olufsen sound system, adaptive cruise control as well traffic jam assist.

Under the hood, the Q7 is expected to come with BS6-compliant 3.0-litre TFSI and 3.0-litre TDI V6 powerplants. The petrol engine develops 340PS while the diesel engine churns out 286PS. Both models come with a quattro all-wheel drive system and an 8-speed automatic transmission. Naturally, the heavy updates on the Q7 facelift means it will be pricier than the existing model which is priced from Rs 73.82 lakh (ex-showroom). Meanwhile, will we be getting the SQ7 with the monster V8 diesel engine please, Audi?

Flagship SUVs seems to be a hit in India. This has been proved by the recently launched BMW X7 that’s sold out for 2019 as well as the Lamborghini Urus. Soon, the flagship propeller will have a new rival in the form of the Q8. The flagship Audi has a major disadvantage due to the lack of a third row. However, it fights back in terms of design and technology. The Q8 looks more like a Lamborghini Urus injected with a tinge of Audi. It also gets that tech savvy cabin and geeky features found in the Q7. Features like autonomous driving tech that comes with lane keeping assist, lane departure warning, adaptive cruise control are exclusive to the Q8 though.

Engine options include a 3.0-litre V6 TDI and a 4.0-litre V8 TDI. The smaller engine develops 286PS and 600Nm while the bigger engine develops a locomotive-like 435PS. The bigger heart is limited to the SQ8 only and before your heart goes all aflutter, we won’t be getting it in India. Naturally, Audi’s quattro all-wheel drive system is present on both variants. Prices are expected to be in the range of Rs 90 lakh to Rs 1 crore (ex-showroom). Expect it here by late 2020.

Another facelifted Audi to join this list are the A4 and A5. This is the first major update for both models and it packs similar exterior styling updates to its bigger brothers. Inside, the cabin gets bare minimum changes, with the most noticeable one being the lack of a swivel wheel for the floating infotainment as it can be operated via the touchscreen only.

The facelifted models get changes under the hood thanks to the inclusion of mild-hybrid tech. Engines on offer are likely to be the 2.0-litre TFSI and TDI units, both BS6-compliant. The petrol engine is expected to be available in either the 163PS or 190PS tune while the diesel engine is expected to develop 190PS, just like the current model.

The swoopy four-door A7 is soon going to make a comeback. Currently, the Mercedes-Benz CLS is the only model available in that particular segment. The A7 sits between the A6 and A8 and is a mixture of both models. While it is as long as the A6 and borrows plenty of styling elements from the smaller car, it packs a whole host of tech found in the bigger Audi. Like the all-wheel steering wheel to ensure agility and a tighter turning circle.

While the international-spec model is available with a variety of engines, the A7 being almost a flagship is expected to utilise a 3.0-litre TFSI and TDI V6 powertrains here. The TFSI motor develops 340PS and the TDI engine is expected to be offered in the 286PS tune. Both engines will come mated with an 8-speed automatic transmission and Audi’s quattro all-wheel drive tech. They also promise to have a 0-100kmph time under 6.5 seconds. Oh, Audi, will the sporty 2020 RS7 make a comeback as it was offered here before?

The A8 flagship sedan is expected to be at your nearest Audi showroom by December and is likely to be offered here in the long wheelbase version. The styling of the A8 can be best described as an 2019 A6 XXL, especially that front grille which is humongous. However, it gets its own styling bits like the connected LED tail lamps that do a dance while locking and unlocking. With ventilated seats that massage your derriere and separate entertainment and climate controls, the 2020 A8’s interior can give any first class airport lounge a run for its money.

However, if you intend to sit in the front, you’ll be complemented by Audi’s first class dual-touchscreen dashboard. Under the hood, the 2020 A8 will come powered by the 3.0-litre TFSI and TDI V6 powertrains found in the A7 and Q7. But the 6.0-litre V12 unit might not be present for a while as the international-spec model doesn’t come with it. Prices for the 2020 A8 are expected to start from Rs 1 crore (ex-showroom), Will you pick it over the luxurious S-Class and the enthusiastic 7-Series?

Audi has already showcased the all-electric e-tron SUV in India and has plans to launch it by the end of 2019. The e-tron will debut as India’s first luxury all-electric SUV. It is powered by two electric motors on each axle that develop a combined 360PS of power. If you want additional oomph, the motor has a Boost mode that ups the power to 408PS and 664Nm. The electric motor draws power from a 95kWH battery packs and is capable of taking you 400km on a single charge. It also supports fast charging and can be juiced up from 0-80 percent in 30 minutes dead.

The e-tron is also fully loaded with tech. Notable ones include the sleek cameras that handle the ORVM duties and feed the view via a screen on the door pad. This also helps the e-tron be more aerodynamic friendly. Then there’s the air suspension that can be lifted/lowered depending on the terrain conditions. You also get all-wheel drive steering wheel for improved maneuverability. Prices for the e-tron are expected to start from Rs 1.40 crore (ex-showroom before subsidies). The e-tron will be brought into India via the CBU route.

So these are the Audi cars that will be hitting your local Audi showroom soon. With the introduction of these cars in India, Audi will be having an almost new portfolio, barring the A3 and Q5. Unfortunately, Audi won’t be present at the Auto Expo 2020 so we can’t have a look at Audi’s revamped portfolio first hand. That said, now that Audi will be back in full force in India, would you pick up one over the tri-pointed star (Mercedes-Benz) or the blue propeller (BMW) ? Let us know in the comments below.