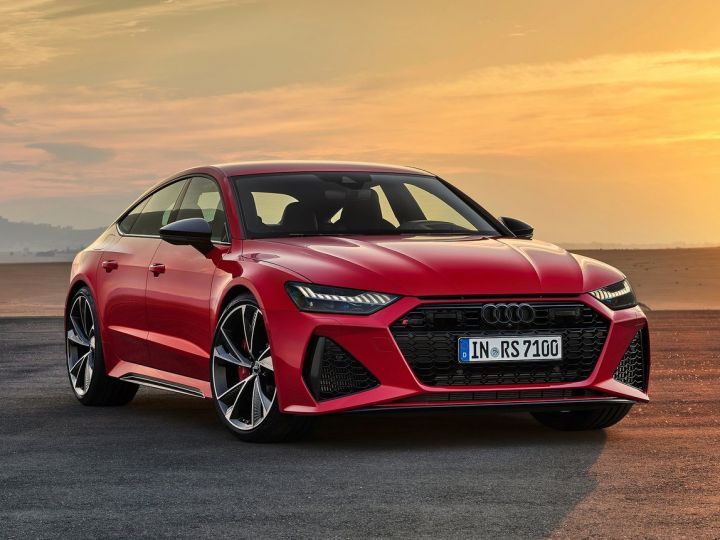 It’s sexy, it’s flashy and it’s red! No, we are not talking about a Ferrari here. This, in fact, is the all-new Audi RS7 Sportback that’s been unveiled to the world just ahead of the 2019 Frankfurt Motor Show. Quite possibly the raunchiest looking Audi in a while, the new RS7 Sportback also packs enough grunt under the hood to put some supercars to shame, and all of this in a 4-door coupe body shell.

Powered by a twin-turbocharged 4.0-litre V8 petrol motor aided by a 48V hybrid motor, the new RS7 Sportback puts out 600PS of power and a gut wrenching 800Nm of torque. Capable of hitting 0-100kmph in just 3.6 seconds, the new RS7 has an electronically limited top speed of 250kmph. However, this can be increased to 305kmph via the Dynamic Plus package. Thanks to the hybrid tech that’s bundled in, the RS7 Sportback also gets features like auto start/stop and regenerative braking.

The mad-hatters at Audi have incorporated adaptive air suspension as standard on the new RS7 Sportback. It gets three modes with varying degrees of ground clearance. In the most extreme setting, the RS7 Sportback sits almost 60mm lower than the A7 Sportback. It also gets a useful ‘lift mode’ which can raise the ride height by 20mm to help prevent the underbody from scraping on bumpy roads. The optional Dynamic Ride Control with better dampers can further enhance the ride on the RS7 Sportback.

Apart from all the RS wizardry, the most striking bit about the new RS7 is its design. The new hexagonal grille with a blacked-out honeycomb design oozes sportiness. While the four-rings rest stealthily and almost merging with the grille, the new LED headlamps stand out thanks to those gorgeous DRLs and dynamic turn indicators. The large triangular air dams complete the look at the front. With 21-inch, machine-finished alloys as standard and the option of upsizing to RS spec 22-inch alloys, the RS7 Sportback gets plenty of bling to ride home in. The coupe-like swooping design characteristics make it a joy to look at from all angles, more so from the rear. The wide connected LED tail lamps along with the racy dual tip exhausts and an RS system adds even more spunk.

Inside, the new RS7 Sportback gets plenty of tech and creature comforts to keep the occupants busy when they are not singing to the tune of that V8. These include the new Audi Virtual Cockpit system, more than 30 drive assists and 360-degree cameras. Available in 13 different shades along with two RS specific colours called the Nardo Gray and Sebring Black, the new RS7 Sportback will leave you spoilt for choice.

With its official premiere set to take place at the 2019 Frankfurt Motor Show today, expect Audi to begin delivering the new RS7 Sportback to European customers early next year. Meanwhile, we expect it to roll on to our shores by mid-2020.

More on Audi A7