Aprilia is reviving the Tuareg name for its latest adventure motorcycle 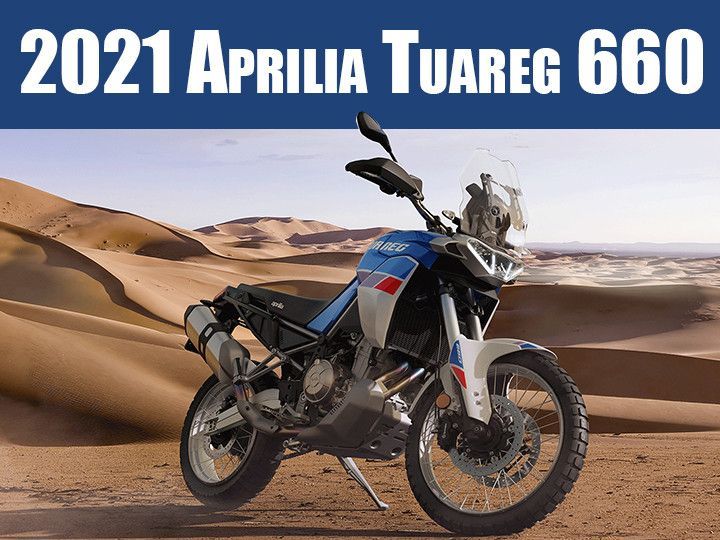 After tasting great success with the RS660 and Tuono 660, Aprilia’s next bike on the mid-displacement 660cc engine platform has broken cover. Behold, the Tuareg 660.

And instantly, you would be fooled to think of it as some other adventure motorcycle (*cough*Honda CRF1100L Africa Twin*cough). The colours, the slim and tall body and even the rider’s seating area are all quite Japanese. In fact, barring the face, you would be hard-pressed to find major differences in design between the Tuareg 660 and its chief rival, the Yamaha Tenere 700.

But Aprilia has been a bit more clever and packaged the Tuareg 660 tighter than Yamaha. While the two motorcycles have the same ground clearance figure of 240mm, the Aprilia has a saddle height of 860mm, 15mm lower than the Tenere. Impressive, right?

So how has Aprilia managed this feat? There have been some minor modifications to the construction of the 660cc parallel-twin RSV4-derived motor. The motor doesn’t arrive in the same high performance tune as its road-biased siblings. On the Tuareg, it only puts out 80PS and 70Nm, which is 20PS down on power. More importantly, though, its torque has been bumped up by 3Nm. Even when compared to the Tenere 700, the Tuareg makes 5.6PS and 2Nm more. Plus, Aprilia states that the Tuareg’s engine has significantly boosted low- and mid-range performance.

Details regarding the hardware used is scarce at the moment. What Aprilia has revealed so far is that the tubular steel chassis is suspended by a 43mm USD fork and a monoshock with 240mm travel at both ends. Brembo brakes and knobby tyres are visible but we do not know the exact dimensions yet.

Admittedly, the Tuareg 660 is going to be arriving with a ridiculously steep price tag. While this sort of a motorcycle -- a decently powerful twin with great ground clearance and relatively accessible ergos -- would have been ideal for India, the duties levied on such imports puts it beyond the reach of many.