Two engine platforms catering to the 250cc segment but which one makes more sense? 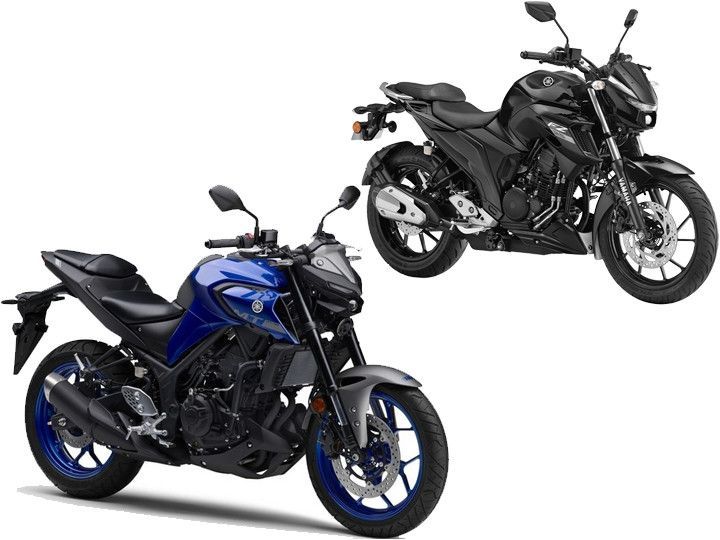 A week back, Yamaha launched the 2021 MT-25 for the Indonesia market. The bike may compete in the 250cc space like the FZ25 but it’s based on a different engine platform, looks a lot sharper, and even gets better equipment. Here’s how the MT-25 differentiates itself from the FZ25 BS6:

The MT-25 looks almost identical to the MT-03. So, you have the same transformer-type front fascia sporting a projector headlight and LED DRLs, a well-sculpted tank with sharp air scoops, and new sporty paint schemes.

The latest update for the FZ25 brought with it a new projector headlamp running an LED DRL and engine cowl. The FZS 25, on the other hand, features a flyscreen and a pair of handguards for a touring-oriented feel. More on the BS6 FZ25 here.

Both bikes use a split-seat setup, but the position of the handlebar and footpegs on the MT-25 is a bit more aggressive which should make it more engaging to ride. The FZ is pegged as a comfortable urban tourer which can carry out occasional highway runs if required.

The MT-25 is clearly the more powerful of the two with a 250cc liquid-cooled parallel-twin engine belting out 35.5PS of power and 23.6Nm peak torque. The FZ25 is down a cylinder and hence, pales in comparison. It's 249cc air-cooled fuel-injected single-cylinder motor makes 20.8PS and 20.1Nm which is decent for city use but may feel lacking if you’re an experienced rider who loves pushing the bike to its absolute limit.

Parallel-twins are known to run a lot smoother than singles. The extra cylinder also puts less strain on the engine which means you could maintain triple-digit speeds all day long without the engine ever feeling stressed. Adding to the MT’s highway capabilities is a 6-speed transmission, as opposed to the 5-speed gearbox on the FZ-25. Both bikes use a 14-litre fuel tank. Also Read: 5 Two-Wheelers That Deserve More Love & Sales

Both the MT and the FZ25 use a diamond-type frame, but that’s where the similarities end. The former is kitted to get the best out of the bike, while the latter makes do with a commuter setup. In essence, the MT-25 gets more premium USD forks and a preload-adjustable monoshock. It also features larger disc brakes for better braking performance and radial tyres for superior handling capabilities. However, the added kit makes the MT-25 12kg heavier than its 250cc Indian cousin.

At RP 55,460,000, equivalent to Rs 2.89 lakh here in India, the Yamaha MT-25 costs almost twice as much as the FZ25. That’s quite steep considering it makes less power than the BS4 Ninja 300 and doesn’t even feature any wind protection. Plus, the MT-25 competes in a niche segment with limited sales as compared to the FZ25 which contends in a space that’s grown exponentially in the past couple of years. Another offering which may interest you is Honda’s upcoming motorcycle which could be christened the ‘CB350X Scrambler’.