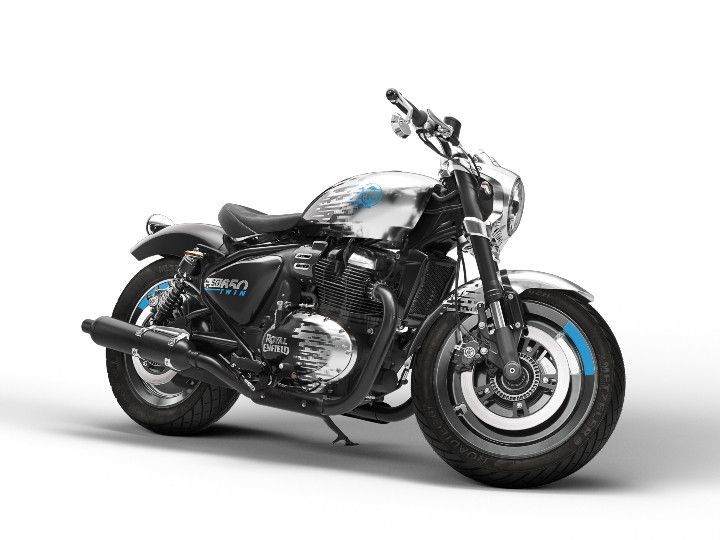 Royal Enfield is the sole Indian representative at EICMA 2021 and it took to the stage to showcase the new SG 650 concept. Yes, RE has shown us a concept bobber motorcycle based on the 650cc engine platform and not the production-ready Super Meteor 650 that we hoped. Nevertheless, there’s still quite a lot to be excited about, as it will give birth to the new Shotgun 650.

Let’s just get the more obvious bits out of the way, powering the SG 650 Concept is the same 648cc parallel-twin heart from the Interceptor 650 and the Continental GT 650. Now, though RE has not shared any details regarding its engine tune, we expect it to remain unchanged at 47.6PS and 52Nm. The bolted-on dual-cradle frame is employed here as well. And that’s about as far as the similarities to the 650 twins go.

The styling is brand new and will appeal to the American audiences. The valanced mudguards, the bulbous fuel tank and the cantilever floating-seat design are neat elements that bring out the SG 650’s Americana theme quite well. The dual-tone black and brush metal graphics are a bit polarising, especially on the engine crankcase. But hey, it is still a concept bike, not the actual Shotgun 650.

A design element we liked is the bikini fairing for the LED headlight. It reminds us of the CFMoto CL-X 700. Given the shape of the fairing, the instrumentation on the SG 650 Concept seems to be quite different from the INT 650 and the Conti GT 650. No dual-pod consoles here, but rather a similar setup to the one you find on the Meteor 350, with a small roundel for the Tripper pod.

The overall ergos of the motorcycle are a bit aggressive, just like you would on a thoroughbred bobber, like the Triumph Bonneville Bobber. The handlebar is flat and wide, the seat is low, and with the mid-mounted pegs, you are seated in a drag-style riding posture. Plus, the chrome-finished bar-end mirrors look too cool.

In order to get the low-slung look, Royal Enfield has modified the subframe as well, which now looks quite similar to the Classic 350. The rear twin-shocks aren’t gas-charged but mounted beneath the rider’s seat. Plus, for the first time ever on a RE, the SG 650 sports a USD fork. No radially mounted front brake calipers but twin rotors are also a first for RE. These brake discs are mounted on solid wheels with diametric cutouts, quite reminiscent of the Harley-Davidson Fat Boy’s Lakester rims.

When do we get to see a production-ready version of this bike? Probably early next year.