With its claimed output figures and a manual gearbox, piloting this EV should feel very close to riding a 150cc petrol-powered bike 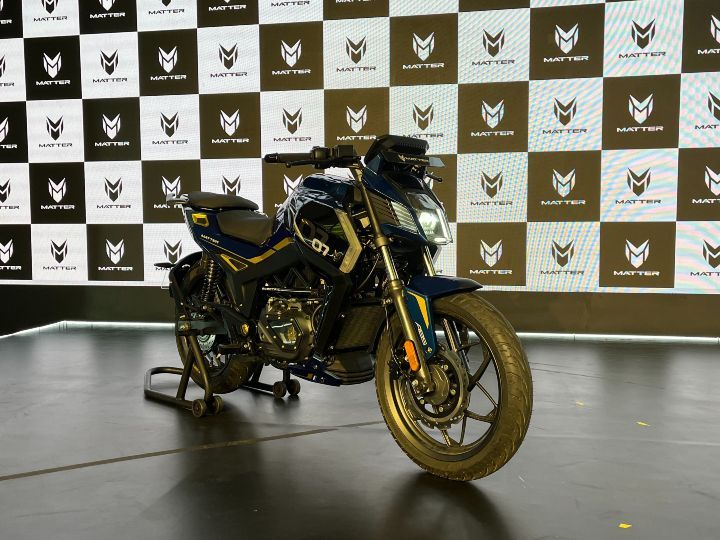 Matter’s first electric two-wheeler has finally broken cover. It’s an electric motorcycle, which is exciting. It features India’s first liquid-cooled motor, which is impressive, but that’s not all you’ve got to be excited about. Here’s everything you need to know about the upcoming Matter e-bike.

Speak to petrol heads about electric bikes and they’ll tell you they aren’t real bikes, because real bikes have gears. Matter has put an end to that debate with the matterDrive 1.0 system on its e-bike. The  IP65 rated 10.5kW, liquid-cooled, mid-mounted motor features a four-speed manual gearbox complete with a clutch! Thanks to which you get variable torque and throttle response. Side note, but importrnt one - on the Matter e-bike both the roter and stator undergo cooling even when the bike is turned off.

The EV has a claimed 520Nm at the wheel, that’s impressive!, and like on some premium race bikes where you can physically see a dry clutch, the Matter e-bike features a transparent cover on the motor showcasing the gearbox in motion. COOL!

The e-bike gets a 5kWh battery pack which is liquid-cooled. It can provide a claimed range of 125km to 150km depending upon the variant chosen. The e-bike will support both standard and fast-charging via a common connector and is equipped with a standard on-board 1kW charger. Charging can also be done using a standard bedroom 5A, three-pin plug point. Using the on-board charger the e-bike can be charged in less than five hours.

The electric motorcycle sports a streetfighter design which vaguely has a similar silhouette to the Hero Xtreme 160R, but its packaging helps the Matter electric motorcycle stand out. It has LED lighting all-around including a bifunctional led projector and is loaded to the teeth with features like – 4G connectivity, keyless operation, seven-inch LCD touchscreen display with onboard navigation, a nine-axis IMU.

Also on offer are comprehensive connectivity features like auto reply to calls while riding and accident detection. It also gets a dedicated mobile app which helps the owner monitor vehicle stats like charge status, current location and ride analysis.

The underpinnings on the Matter e-bike include a telescopic fork and twin gas-charged shocks, while braking is handled by single disc brakes at either end with dual-channel ABS assist. Finally, the motorcycle has been assembled on a double cradle frame and the faux fuel tank holds a small five-litre storage compartment underneath with a USB charging port.

Matter's first e-bike appears to be a near production model and could launch in January 2023, with deliveries expected from April 2023 onwards. From its existing network of 50 dealer partners currently Matter is looking to grow that to 200 by the end of 2022. There is no official price disclosure from the brand, but we expect it to be priced at around Rs 1.75 lakh (ex-showroom).

When launched it will slot above the Revolt RV400 and will rival the Torq Kratos.