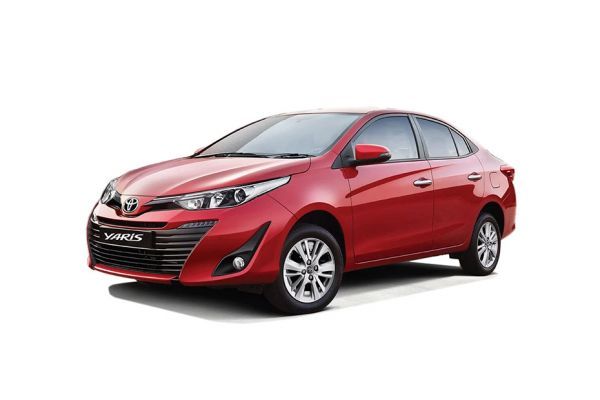 Toyota Yaris is a 5 seater sedan car launched at a base price of Rs. 8.76 lakh in April 2018 by Toyota in India. Yaris is available in petrol engine only . Yaris petrol is powered by 1496cc engine claiming mileage of 17.8kmpl. Yaris also comes with automatic transmission. It is available in 14 variants and 10 colours.

Toyota has launched dual-tone variants of the Yaris as well as price cuts on select variants. The Yaris dual-tone consists of the J Optional, G Optional and V Optional variants with manual and CVT options, making it six additional variants in total.

On the outside, the dual-tone Yaris remains largely unchanged aside from the dual-tone black roof and a piano black finish on the grille, OVRMs and Fog Bezel. Inside, the V Optional variant gets new leather upholstery, centre console box as well as a leather-wrapped steering wheel & gearshift knob. The 7.0-inch touchscreen infotainment system has also been given an upgrade to accommodate Android Auto and Apple CarPlay.

While the Yaris initially had a 7 airbag setup as standard for all variants, the J Optional and G Optional variants are limited to a 3-airbag setup. It is offered in four different body shades and two more options for the standard variants. It will rival the likes of the Honda City, Hyundai Verna and Maruti Suzuki Ciaz in the Indian market.

Q. Which is most powerful car in 10 lakh range - Yaris? View All Answers
Q. Is it a good idea to install CNG kit in Yaris?
Q. Is there any touch screen navigation in Yaris J CVT variant?
Q. I want to buy the Toyota Yaris automatic but i need in diesel version. Please can you give me a necessary information on Yaris.
Q. Can base model be upgraded - Yaris?
Q. How comfortable is the rear seat for long drives - Yaris?
Q. I am confuse between Honda City CVT petrol and Toyota Yaris CVT petrol? My daily ride is about 20km within the city. Which should I buy? Toyota has a low maintenance advantage over Honda and Honda has a better ride quality than Yarris. View All Answers
Q. Is Toyota Yaris BSVI compliant?
Q. Which is better Yaris or Glanza car?
Q. Is Toyota yaris available in Diesel? View All Answers
Q. What is the ground clearance of toyota yaris? View All Answers
Q. I'm caught up between buying Hyundai Grand i10 and Toyota Yaris. Please I could use some expert advice. Thanks.
View More Questions All Yaris Questions and Answers

The 2018 Yaris takes on the likes of the Honda City, Maruti Suzuki Ciaz, Hyundai Verna, Skoda Rapid and the Volkswagen Vento. It gets a host of standard safety features and other comfort-enhancing gizmos as well. The latest sedan from Toyota feels like a baby Corolla Altis and offers a plush ride that its prospective owners will appreciate.

The Yaris is available with a single 1.5-litre, 4-cylinder petrol engine. The motor makes 107PS of power and 140Nm of torque, and can be had with either a 6-speed manual or a 7-step automatic CVT. Now, it isn’t the most sprightly sedan around, but it does a phenomenal job of commuting. There’s no diesel engine on offer, and Toyota says we shouldn’t be holding our breaths for one.

You get to choose between a total of four variants for the Yaris - J, G, V and VX. Like we mentioned earlier, the fact that seven airbags are standard across the range is a sweet touch. We’d say it’s the one above base G variant that packs in the most value. You’d want nothing more for the price.

Toyota’s Yaris might not be an aesthetic delight, but it does look purposeful. In terms of size, it’s right up there with its rivals and it does have the must-have ingredients. The face is dominated by the large projector headlamps that feature a LED light guide. There’s a separate set of daytime running lamps underlining the headlamps too. You’d find some more LEDs in the tail lamps of the Yaris, and that pretty much sums up the design highlights. The design is typically Japanese (and typically Toyota), which should please most and offend none. If we could nitpick, we’d say the wheels are one size too small. They simply don’t sync with the bulbous proportions of the Yaris.

Despite being among the widest cars in its class, the Yaris’ cabin does feel quite narrow. It’s a four seater in our books. Even its younger cousin, the Etios, offers more width at the rear. Kneeroom, while not exceptional, feels acceptable. If you pick the top-spec VX variant, Toyota will spoil you silly. Highlights include a powered driver’s seat, a 4.2-inch TFT colour screen for the MID and roof-mounted AC vents. Segment staples including automatic climate control, cruise control and leather upholstery are on offer as well. What’s truly commendable is Toyota’s decision of offering seven airbags as standard right from the base-spec variant.

Honda City : The City continues to be the most desirable sedan in this lot. It’s got the looks, the tech and more importantly - that oh-so-illustrious H badge on the grille. It’s fun to drive and has enough space to shame cars from a segment above. Looking for a big car experience? Dial H for Honda.

Hyundai Verna : Looks suave, is loaded with features you didn’t know of, and most importantly - doesn’t ride like it’s got pogo sticks for wheels. If you can make peace with the limited room at the rear, this is the best Verna ever!

Volkswagen Vento : It’s ageing, but it’s far from being dated. If you’re keen on driving (fast) yourself, the dual-clutch transmission on the Vento will be a more-than-willing partner in crime. It’s got a stiff ride, but the basics of space, practicality and ergonomics have been nailed to the T.

Maruti Ciaz : There’s nothing that makes you go ‘wow’, but it doesn’t let you whine either. Yes, it’s a bit boring to drive and it could do with some more features. But, if you need a no-nonsense car to be chauffeured around in without burning a hole in your pocket, the Ciaz should be in your garage.

Skoda Rapid : There’s not much to dislike about the Skoda sedan. With the facelift, it looks as premium as ever and packs in more tech, too. If you feel the Vento is a bit out of reach, pick the Rapid. It’s practically the same package delivered with a smaller pinch to the wallet. Yes, it’s a tad bit old and it could do with some more features - but that build quality does make up for a lot!

The Yaris isn’t a mass-pleaser. It will appeal to those who appreciate nuances like a sure-footed ride, and low NVH over gimmicks such as LED headlamps and sunroofs. If you needed a petrol sedan that will outlast you, your search ends here.

Toyota Yaris vs Honda City vs Hyundai Verna : Which ones the smarter choice? - PowerDrift