How does Toyota’s Yaris intend to chalk out its territory from under the noses of rivals like Honda’s City, Maruti’s Ciaz or Hyundai’s Verna? 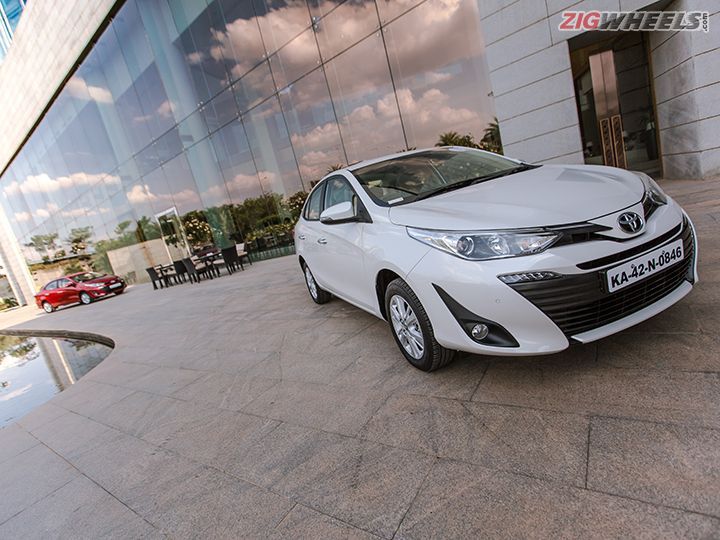 Toyota’s Yaris is entering into the space dominated by stalwarts like Honda’s segment-defining City, Hyundai’s stylish Verna and Maruti Suzuki’s spacious and sensible Ciaz. On our first drive of the Yaris we found that this Toyota is packing in something extra to take on the competition. Before we tell you how it is likely to wow you, like it did us, lets see what it misses out on.

… it had diesel!
No diesel. Globally, Toyota is seeing declining diesel demand and so, it isn’t planning to bring a diesel to the Yaris. Post 2020, when the BS6 norm kicks in the updated diesel powertrains will get even more expensive, and slash the VFM quotient. So it’s the 1.5 petrol that sits in the Yaris’ nose.

Feature Gamble
Toyota is offering segment-first features in the Yaris, but at the same time the equipment list misses out on some goodies. For instance, while projector headlamps are offered from the base variant onwards, LED guidelines in the headlamp and tail lamp are only available on the top two variants while LED DRLs are only offered on the top variant. Which implies, there are no full LED headlamps. Functionally, the projectors should do their job just fine; however, the wow factor of LED headlamps will be missed. Then there are the wheels. The Yaris uses the same tyre sizes as the Etios, which is a 185/60 R15. Got it? 15” wheels when the competition is offering 16-inchers - this surely robs it of some of the style quotient.

There’s no sunroof either. While we won’t mourn the lack of this silly indulgence, we will grumble over the lack of Android Auto or Apple CarPlay connectivity. The 7” touchscreen display is quick to respond, but the colours don’t look rich, the UI could be more slick, and in harsh sunlight it’s hard to see much even with the brightness level maxed out. This feels a bit annoying as the lower V variant’s screen looks crisper! Also, while the front door pockets get 1-litre bottle holders, you will only be able to squeeze in smaller bottles in the rear door pockets.

This sense is highlighted when you are in the cabin. In the backseat, the beige upholstery helps mask the tightness of the package, but you quickly realise that this is ideally a four-seater. The flat floor would have helped the middle passenger, but the centre storage sticks out too far back. So children would be better suited for this spot.

Also, the Yaris’ 2550mm wheelbase is the smallest in the class, and the amount of legroom on offer, while ample, isn’t enough for you to stretch out.

Playing it Safe
Where it matters, Toyota is playing it safe, properly. The Yaris gets seven airbags as standard. Yes, the seventh airbag is the driver’s knee airbag. The top end VX variant gets Vehicle Stability Control, Hill Start Assist Control too and a tyre pressure warning system too. The latter sets off a warning light when the pressure drops below 80 per cent in the tyre. ABS, EBD and ISOFIX seat mounts are available as standard.

Cocooned
Nothing creates calm like a sense of detachment from the world around you. The Yaris uses additional sound deadening in the roof liner and special glass for the windows to cut out sound and heat from the cabin. It works - just rolling up the windows slashes the surrounding noise dramatically. A rear sunshade enhances the backseat experience further.

The well bolstered seats gently hold you in place, so catching a nap here is all too easy. Part of the credit also has to go to the well balanced suspension setup. The 185/60 R15 tyres with their tall sidewalls muffle the rudeness of the road surface. The Yaris didnt toss us around at low speeds on broken roads or wallow about at higher speeds. Even with four hefty occupants and a boot full of luggage, it stayed controlled.

Luxing it!
Of course it helps that the leather seats are supple, and look rich too. The roof-mounted air-conditioning system debuts on the Indian Yaris and will be rolled out in other markets later. While this system doesn't have its own cooling unit, it sucks in the cool air from the front, speeds it up and aims it at the rear passengers. The air con has enough power to cool the entire cabin, but this roof-mounted setup gives the passengers a lot more flexibility in directing the air compared to other floor-mounted air con vents for rear passengers.

The driver is pampered too - the top end VX variant offering an eight-way electrically adjustable seat. Lower variants get manual adjustments, with seat height adjustment available from the base variant. And if fiddling with knobs seems a bit pedestrian, the infotainment system on the VX variant lets you wave your hand around to get it to increase or decrease the volume or change tracks.
The overall cabin quality raises the ambiance enough to make the Yaris feel a bit more expensive than the segment. The leather pads on the door, the silver accents on the centre console, the piano black finish for the centre console and the silver trim looks upmarket.

Take a Nap
The backseat of the Yaris is very well suited for catching forty winks as the calmness is enhanced by the suspension setup. The rudeness of broken roads is blunted by the tall sidewalls on the 15” tyres. You don’t get jabbed by rumblers or potholes, the suspension setup makes sure of that. But do not think that it is softly sprung to pander to the backseat alone. Toyota has instead found a fine balance that, rightly so, errs on the firm side of plush. The result is a sedan that is composed and confident at highway speeds even when loaded with passengers and luggage.

Gentleman Drive
So the Yaris packs a 1.5-litre petrol engine which is related to the one in the Etios. However, it makes a lot more power as it uses variable valve timing for the intake and exhaust. The 107PS of power is a big jump from the Etios’s 85; however, at 127PS the City offers much more. Also, like the City, the Yaris is offered with a CVT gearbox, which is available as an option right from the base variant.

While CVTs and rubber band effect go hand in hand, the designs are constantly evolving and the Yaris feels pleasingly responsive. Even light throttle inputs get the desired result, so it feels more natural and relaxing to drive be it in the city on the highway. It's only when you flat foot it that high revs are sustained for longer durations and the accompanying engine noise becomes apparent in the cabin. The accompanying change in momentum, although adequate, isn’t snappy. For greater control you can use the paddle shifters or the gear lever to select from the seven simulated “gears” offered on the transmission. This combo makes the Yaris a great commuter and even returns a company-claimed 17.8kmpl, which is slightly lower than the competition, but higher than the manual variant’s’ 17.1kmpl.

Fun & Toyota?
The six-speed manual-equipped Yaris also proved to be great to use. The engine was ready to amble calmly at low speeds and revved freely when pushed. The short throw of the gearbox and the smooth shifts made it a joy to use. Revving it up to its 6200rpm redline was enjoyable and i can see people doing that just for the joy of it.

The Yaris’ brakes also felt properly delightful. Just a light tap is enough to make you feel like you have literally dropped anchor, as brake force distribution keeps it sharp and clean. Modulating the brakes was a bit easier on the CVT-equipped car, whereas the manual was more urgent. A fun Toyota, sure! But, we won’t call it exciting just yet, for that it would need a bit more punch from the engine and a more involving steering.

Goody?
Apart from the comfort-oriented aspects there are no standout features on the inside. However, the Yaris packs in a fair bit, like the 7” infotainment system with navigation functionality on the VX variant. The MID system uses a 4.2” TFT display that is easy to read on the go and looks good too. It displays parking sensor information, Eco savings and other trip information clearly.

While the base J variant is a bit sparingly equipped, the next G variant makes for an attractive package as it gets all the essentials like automatic climate control, rear air conditioning vents, touchscreen infotainment, steering-mounted audio and telephony controls. It also has an engine start-stop button, electrically adjustable and foldable ORVMs, rain-sensing wipers, smart entry system and rear parking sensors.

Part 3: Give and Take
Toyotas are about reliability and dependability, and for that alone some people will gravitate towards the Yaris. The safety equipment levels on the Yaris fortify this faith further. The Yaris deserves to be looked at seriously by midsize sedan buyers as it makes for a calm commuter and capable all rounder. The sense of premiumness in the cabin and the relaxing backseat experience are clear highlights.

However, its narrow cabin makes it seem a size smaller than the competition and some misses on the feature list eat into its advantage. But if Toyota prices the Yaris neck and neck with the Honda City, between Rs 9 lakh and 14 lakh, the Yaris would prove, and, despite its shortcomings, stand out as the luxury pick of the segment.