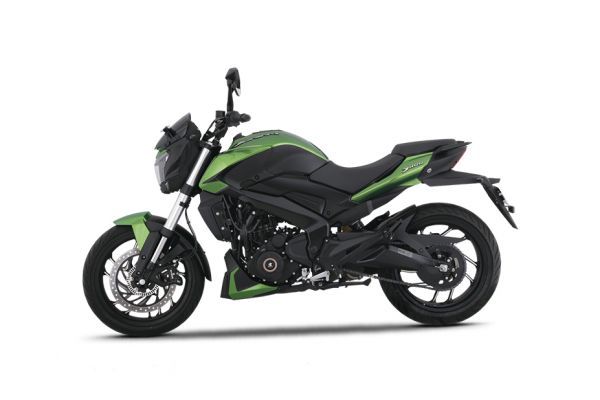 Ask your question from Dominar 400 owners and experts
Your Question should contain at least 5 characters Submit Cancel
Available EMI Options
Rs. 5,582 per month @ 11.99% Apply for Loan

The 373.3cc DOHC liquid-cooled single-cylinder motor has its origins in the KTM 390 Duke’s powerplant. Output figures stand unchanged at 40PS and 35Nm even after being upgraded to BS6-compliance, and the engine is mated to a 6-speed gearbox via a slipper clutch. This being the flagship Bajaj product, it’s held together by sturdy underpinnings consisting of a perimeter frame suspended on a 43mm USD fork and preload-adjustable monoshock. The rear swingarm is a stamped unit. Anchorage is provided by a sizable 320mm/230mm disc brake combo assisted by dual-channel ABS.

The Dominar labels itself as a hyper-tourer, so even though it is a naked, it isn’t as small and sharp as your average streetfighter. It sports a slightly raked-out look and the defining feature is its fascia characterised by the sharp LED headlight. The design features some heft and bulk in the fuel tank region and the double-barrel exhaust exits look quite cool as well.

The Dominar 400 sports an LED headlight and turn indicators. Instrumentation is fully-digital and consists of a twin-display setup. A beefy 43mm USD fork is offered up front and the rear monoshock is preload-adjustable. Safety net is provided by dual-channel ABS and it also features a slipper clutch.

Comparing on specifications and performance, the Dominar goes up against the likes of the BMW G 310 R and Honda CB300R, both of which are significantly more expensive. In terms of price, the Dominar competes with the KTM 250 Duke, Royal Enfield Himalayan and Suzuki Gixxer SF 250.

What is the price of Bajaj Dominar 400?

What is the Tyre and Wheel type of Bajaj Dominar 400?

Does the Bajaj Dominar 400 have ABS?

Which is better Bajaj Dominar 400 or Royal Enfield Meteor 350?

What is the EMI of Bajaj Dominar 400 in Delhi?

What are the colours available in Bajaj Dominar 400?