Is the new Dominar 400 good enough to be a cost-effective alternative to the venerable KTM 390 Duke? 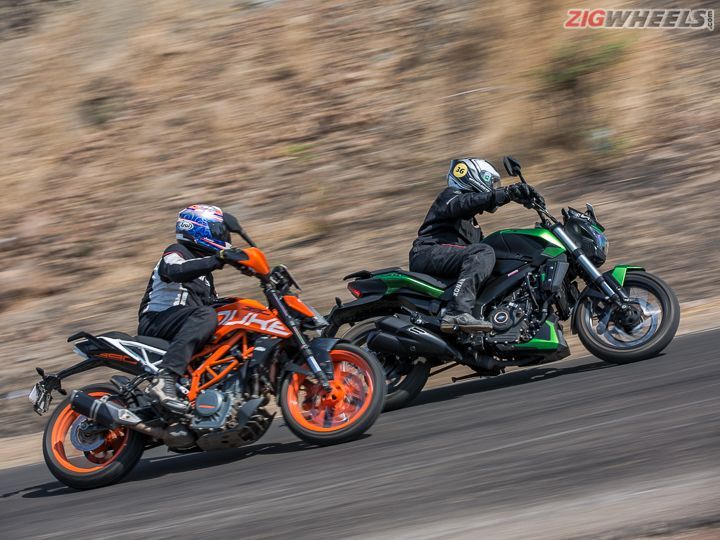 Most often than not, dreams, hopes and reality are set well apart from each other. On certain occasions though, manufacturers do blur them all out, and a golden goose is born. That’s exactly what KTM did with the 390 Duke. With oodles of power, ninja-like agility (pun unintended) and a healthy feature list, the 390 Duke gave the masses what they always dreamed about: a fast, premium bike that doesn’t cost an arm and a leg!

Bajaj made use of its ties to KTM and launched the Dominar 400 in 2016. Notwithstanding their ‘quirky’ marketing strategies, the Dominar has gotten a second chance in the form of the 2019 iteration. There are a host of changes which are intended to bring the bike closer to the Duke. But how close has it gotten?

Pottering In The City:

The power delivery in the Dominar is quite linear, which makes life in the slow lane a lot more liveable. That said, there are some vibrations in the handlebar at around 3500rpm which do leave a tingling sensation in your palms after some sustained time in the saddle. However, these vibrations iron out once you’re past the 4000rpm mark, and that’s where the powerband lies. On the other hand, the KTM’s feral power delivery forces you to be alert as one slight twist of the wrist catapults the bike forward. Newer riders might be intimidated by its brutal acceleration. In terms of overall engine refinement, it’s the KTM that’s superior. The ride-by-wire makes on-off throttle transitions a really smooth affair in the Duke. In the Dominar, there’s a little bit of notchiness because of its cable-operated throttle, but the engine’s linear delivery mitigates it to an extent.

Taking the bike out of tight parking spaces will be a bit of a bother in the Dominar as the 184kg (kerb) weight really makes its presence felt. The fat upside down forks and reduced steering movement to either side also make it cumbersome when performing sharp turns - I almost dropped the bike while taking a U-turn! Low-speed manoeuvrability is really where the KTM’s relatively small turning circle and the fact that it’s a whole 21-kilo lighter make a huge difference.

Being a high-strung engine, the Duke heats up rather quickly. I was riding at night on the highway and the fan kicked in the moment I pulled up to my highway-side housing society. And it’s loud enough to attract attention. The heat can really be felt on your calves and feet but that’s not the case with the Dominar. Despite Bajaj upping the compression ratio from 11.3:1 to 12.1:1 in the new model, the Dominar’s thermal management is really commendable even on hot, sunny days. The fan is also a lot more silent than the Duke’s.

Munching Miles On The Highway:

We all know both the Dominar and the Duke are properly highway-worthy, capable of sustaining 110-120kmph effortlessly. There’s plenty of grunt on both bikes to make them go even faster at full chat. But at around 120kmph, the 2019 Dominar 400 feels relatively more relaxed than the Duke. The new DOHC setup has resulted in reduced engine vibrations while improving the bike’s momentum on the highway. However, beyond 120kmph, the Duke comes to its element thanks to its sheer power (and of course, significantly better power to weight ratio).

But at triple-digit speeds, both bikes warrant the need for a small windscreen. You’re slightly worse off in the Duke as the windblast pushes you backwards because of the upright riding position.

Both come with a 6-speed transmission with a slipper clutch as standard. But on the KTM, the 6th gear is quite tall. It slots in comfortably only after 75-80kmph, whereas the Dominar’s top gear pulls the bike cleanly right from 45kmph. It goes to show that the Dominar’s tractability is better than the Duke. Plus the healthy mid-range punch helps make overtaking on the highway an easy affair.

The Dominar’s long-ish rake angle makes the front end feel a little disconnected while cornering. But once you put in a bit more effort on the handlebars, it sticks to its line properly. Even the MRF RevZ tyres inspire a fair bit of confidence and do a pretty good job in keeping the rubber side down while carving corners. However, the Dominar does feel slightly top heavy. So while it does tip into corners fairly effortlessly, transitioning from one corner to the next takes more effort.

On the other hand, the 390 Duke’s dynamics is a whole different ballgame. Its sharper rake angle and sportier stance help the rider lean effortlessly, making short work of the twisties. The light kerb weight and sticky Metzeler tyres further eggs the rider to achieve higher lean angles. And corner-to-corner transitions on the Duke are nothing short of explosive - so much so that it’s enough to scare novice riders.

As far as braking is concerned, the Dominar has plenty of bite on offer, but the lever feel and progression feels quite numb. The Duke, on the other hand, offers brilliant feedback, progression and bite. It is good enough to warrant the need for just one finger to bring it to a halt. Plus, the adjustable levers accommodate a variety of palm sizes.

Over bad roads, the KTM 390 Duke held its own surprisingly well. In fact, the ride quality is a lot plushier than the Dominar 400, with the front inverted forks and rear monoshock working effortlessly to keep the rider’s bum comfy. The damping is just about right so that it doesn’t make the bike feel wallowy on uneven corners. In the Dominar, the front end is supple and the rear suspension has been reworked so that it rides significantly better compared to the previous bike. But its quick rebound ends up transferring the jolts to the rider over sharp bumps.

The Little Things That Matter:

The Dominar’s wide tank extensions coupled with the wide handlebars result in a commanding riding position. It’s more comfortable than the Duke too, as the footpegs-handlebar position combo is a lot more relaxed. Though the seat is roomier, it doesn’t let you move about in corners as quickly as the KTM’s seat does. On the KTM, you sit in a very compact position, with your legs tucked in behind a bit because of the rear-set footpegs. While it helps you flick the bike better in corners, your knees end up feeling a little cramped over long journeys on the highway.

Thumb the starter button in the Dominar and you’ll be invited by a throaty, bass-filled growl. The Dominar’s aural note is a lot louder than the Duke’s and it makes you feel like you’re on a bigger bike. However, the gruff note can get a bit tedious over time, especially if you’re experiencing it in traffic.

While the 2019 Dominar’s instrument cluster is a major improvement over its predecessor, it simply fails to match up to the pizzaz of the 390 Duke’s TFT screen. Also, while that secondary pod on the tank sounds nice in theory, it’s just bad design in terms of practicality. While you’re on the move, glancing at it is downright dangerous as it is located well below your line of sight. And this is where Bajaj has chosen to put the gear position indicator - a feature you use quite often. What were they thinking?

With all the improvements that the 2019 Dominar has brought, it’s finally become the bike that it should’ve been in the first place. But the fact that these updates come for just about Rs 10,000 over the older-gen model, makes it even more value-for-money than it was before. It checks a lot of boxes and does a lot of things right. What plays an even bigger role in sealing the deal is its stonking price of just Rs 1.73 lakh (ex-showroom, Delhi)! It all makes perfect sense in the head, doesn’t it?

But there is a problem. The Dominar is not a bad bike by any means, no sir! But when faced with the likes of the KTM 390 Duke, the Dominar just makes you feel like you’ve settled on a machine that could’ve been a whole lot better. There are none of those exhilarating, scary and glee-inducing feelings that you experience on a 390 Duke. And because of that, at least for enthusiasts, the premium of Rs 75,000 for the KTM might just seem worth it.