The new Bajaj Dominar is here with a host of updates, but is it late to the party? 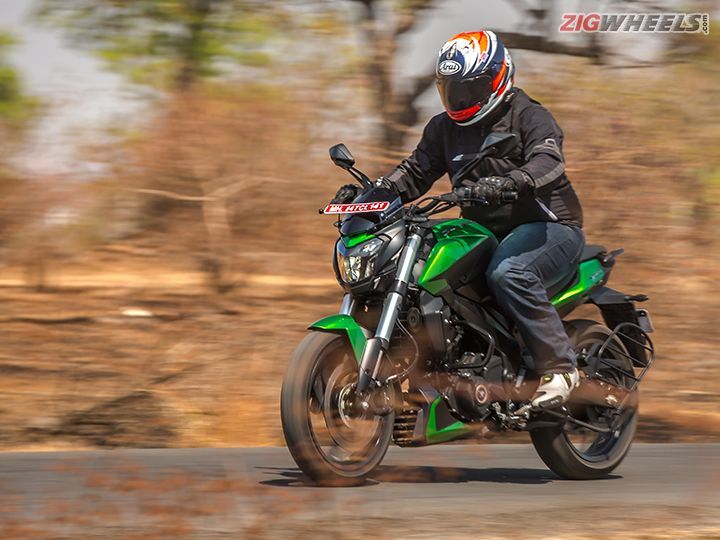 Ever since its launch in 2017, the Dominar has been Bajaj's most powerful, feature-rich and expensive motorcycle. As expected, a lot was riding on its shoulder. Unfortunately, sales never really took off in a manner that the brand expected. However, Bajaj hasn’t thrown in the towel yet. In fact, it has put in some serious effort into upgrading its flagship motorcycle. The 2019 Bajaj Dominar 400 is equipped with a more powerful motor, higher-spec hardware, new features, and styling updates. So have these changes made any impact?

Performance has gone up
Bajaj has taken the word ‘upgrade’ rather seriously with the new Dominar. While the new engine’s 373.2cc displacement and the triple-spark setup is same as the one on the old bike, it now features dual overhead camshafts (DOHC), revised ECU mapping and a new exhaust system. The compression ratio has been bumped up from 11.3:1 to 12.1:1. All these updates have resulted in a remarkable 5PS gain in power that now arrives at 8650rpm. Torque figures remain unchanged at 35Nm, but it’s now made 500rpm higher at 7000rpm.

The bump in power can be felt as soon as you start riding. The new Domina 400 accelerates faster than the older version and Bajaj claims that it can dash from zero to 100kmph in just 7.5sec, which makes it 0.7sec quicker than the older bike! The new motor revs more freely while throttle response feels more direct and crisp. Another highlight of the new Dominar is its strong mid-range pull, making overtaking on the highway feel effortless. Bajaj also claims a top whack of 156kmph for its flagship bike. The exhaust system has been revised and it now has a much more bassy and throaty exhaust note as well. The 6-speed gearbox goes about its task well. The bike continues to get a slipper clutch and the clutch action feels a lot lighter than before.

One of the major drawbacks of the first-gen Dominar was its lack of refinement and high NVH levels. Bajaj’s engineers seem to have worked hard on this aspect and their efforts have paid off. The 2019 Dominar 400, despite its higher compression ratio, is much more refined than its predecessor. On the new motorcycle, you can cruise at 100kmph in 6th gear (at 5,500rpm) with hardly any vibrations. You can sustain 120kmph on the highway with only a minor buzz on the handlebar and footpegs. In fact, the engine doesn’t show any sign of strain all the way up till the 8000rpm mark. As Bajaj claims, the new Dominar has truly upped its touring game.

The new motor isn’t BSVI-compliant yet, but Bajaj officials say it can be easily reworked to meet the upcoming emission norms. Bajaj claims the new Dominar 400 has a claimed fuel efficiency figure of 27kmpl. At 13 litres, the tank capacity hasn’t changed. While we feel Bajaj could have improved fuel capacity, the additional re-engineering would have added to the cost of the bike.

Better hardware
Apart from the revised motor, Bajaj engineers have also equipped the new Dominar with USD forks. At 43mm, the new USD forks are as thick as the telescopic forks seen on its predecessor. Meanwhile, the spring rate of the rear monoshock has been revised as well. Bajaj claims that the Endurance-sourced USD fork is the same open cartridge type unit as seen on the new KTM 390 Duke. Ride quality was a sore point on the older bike. So has the brand addressed this shortcoming? Well, not completely. While the overall ride quality has improved, it still feels a bit inadequate. Despite the revision in spring rate, the monoshock feels stiffly sprung. At slow speeds, the ride isn’t too bad. But riding over sharp potholes and bumps even at moderate speeds sends a shock to the rider’s and pillion’s back. The USD fork, on the other hand, does a much better job of damping. But the stiff setup at the rear means you’d be better off if you stick to smooth tarmac with the new Dominar 400.

The steering geometry on the new Bajaj Dominar remains identical to its predecessor and so does the perimeter frame. At 184kg, the new bike is 2kg heavier than before. However, it manages to mask its weight well on the move. But moving it by foot in the parking lot is a whole different ball game. On the few sweeping corners we encountered, the Dominar 400 felt confident and the revised front suspension meant that tipped into corners quicker. We had a very restricted time to shoot the bike and couldn’t ride it in the city as much as we’d hoped. So stay tuned for our thorough road test to know all about its dynamics in the urban environment.

As far as the braking setup is concerned, the new bike offers the same kit as its predecessor. However, the front rotor is now placed on the left-hand side, just like the KTMs. Another major update is that the calipers are now radially mounted. Sadly, they still don’t get sintered pads. Bite offered by the brakes is good. However, the lever action feels spongy and lacks feedback. We feel Bajaj should have given the bike the updated master cylinder from the new KTM 390 Duke for better braking performance.

Looks same, but it's different
The 2019 Dominar 400 looks almost identical to its predecessor, which isn't really a bad thing as the Dominar was always a handsome looking motorcycle. However, look closely and you will find a few differences. The most noticeable one is the USD fork, which makes the bike look more like the CS400 concept that the company showcased at the 2014 Auto Expo. The beefy USD fork endows the new Dominar 400 with a proper power cruiser-like stance although we would have preferred a grey or black finish for the fork tubes. In the past, we’ve felt that the flagship Bajaj could have been offered in more exciting colours. With the new one, Bajaj has answered our prayers. The bright metallic green shade on our test bike is called “Auroral Green” (for now). Most people kept referring to it as “Kawasaki green” during the test ride. Bajaj designers have also made the LED headlight sharper and reworked the internals of the taillight to make it brighter.

Another interesting addition on the new Dominar is its redesigned instrument cluster. The conventional digital unit is similar to the older bike, but it now gets real-time and average fuel efficiency information along with a side stand indicator. The tell-tale lights are now positioned below it and so is the shift indicator light. The secondary digital console on the tank displays information like gear position, time, odometer and two trip meters. I personally feel the gear position indicator should have been displayed on the main console as the secondary console doesn’t fall in the riders field of vision. Other additions include wider rear view mirrors with forged aluminium stalks, a dual-barrel exhaust muffler, a sporty tank pad, diamond-cut alloy wheels, and forged steel side stand. A tasteful addition is the Dominar logo on the pillion seat, which now gets bungee loops (that can tuck away under it) to strap your luggage securely. The new Dominar will also be offered with a range of accessories from Autologue, which you can read about here.

Comfort quotient
The new Dominar 400’s rider triangle is similar to that of the older bike and the riding posture is upright with a slight forward-canted stance. Seat padding remains identical and coupled with the comfortable riding posture, touring on the Dominar shouldn’t be a tiring proposition. I am 5ft 10in tall and found the 800mm saddle height very comfortable and it should be fine for most riders. The pillion seat is also quite large and accommodating. But the high set pegs mean taller riders will find it slightly cramped. And since the footpegs aren’t rubber mounted, the pillion feels more vibrations than the rider.

Bajaj hasn't announced the prices of the 2019 Dominar 400 yet. However, we expect the new motorcycle to carry a premium of Rs 20,000, which is fair considering the number of updates it has received. The new bike retains its value-for-money tag when compared to other offerings like the TVS Apache RR 310, KTM 390 Duke and even the BMW G 310 R, all of which cost well over Rs 2.0 lakh. We feel the new Dominar 400 could be priced between Rs 1.8 lakh to 1.85 lakh (ex-showroom).

With the new updates, Bajaj has ironed-out most of the issues that deterred us from liking the Dominar immensely. In fact, we feel Bajaj should have launched the Dominar 400 in this very spec in 2017. Well, better late than ever, right? In this upgraded form, it is now a much better highway cruiser than its predecessor. So if you're planning to buy a touring motorcycle for under Rs 2 lakh, we’d recommend you take a look at the 2019 Bajaj Dominar 400.