The highly-awaited flagship of TVS’s lineup, the Apache RTR 200 4V is finally here, and it promises to deliver all that Apache enthusiasts have been clamouring for. We compare its specifications and features against its closest rivals, the KTM 200 Duke and Bajaj Pulsar AS200 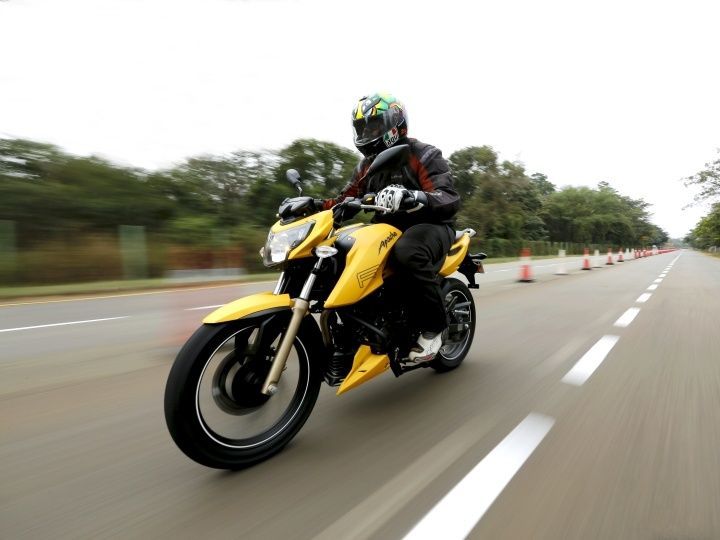 After an interminable wait, TVS Motors has finally taken the wraps off the Apache RTR 200 4V today at their test track in Hosur. Being the new flagship, the new naked streetfighter has a lot riding on its shoulders, not just for its makers but also for the enormous amount of expectations that enthusiasts have placed on it. It also needs to up the ante in the 200-odd cubic capacity game considerably, because there have been some very worthy contenders for this throne in the last few years. Below, we pit the specifications, features, and general impressions of the Apache RTR 200 4V against its two closest rivals, the KTM 200 Duke and the Bajaj Pulsar AS200.

The Apache RTR 200 4V is the first TVS to get a monoshock suspension at the rear, something that the KTM 200 Duke and the Bajaj Pulsar AS200 already boasts of. The former two gets all-digital instrument consoles, while Bajaj have chosen to stick with the tried and tested analogue-digital console for the Pulsar. The KTM is the only one in this trio to have upside down-front forks, that too from Swedish specialists WP. All three bikes employ disc brakes at both ends, the Pulsar having the largest diameter at 280mm, while the RTR is the only with petal disc rotors. None of the three bikes has anti-lock braking systems, but TVS Motors say that ABS is definitely coming to the RTR 200 4V in the future.

The rest of the cycle parts are pretty similar. While the 200 Duke and Apache comes with high-performance tyres -- from Metzeler and Pirelli respectively – as either standard or optional equipment, the AS200 makes do with de rigueur MRF Zappers.

Sadly, the Apache RTR 200 4V is the only one of the trio here to come with a 5-speed transmission, while the 200 Duke and AS200 both feature six-speed ‘boxes. With the advent of better maintenance-free batteries, kickstarters have been given the boot in all three motorcycles.

With a base price of Rs 1.38 lakh, the KTM 200 Duke is the most expensive of the lot here by a fair margin. The Bajaj Pulsar AS200 will set you back by Rs 93.5 lakh. The just-launched TVS Apache RTR 200 4V will retail for Rs 88,990 (ex showroom, Delhi) for the carb variant while the top end fuel injected variant with Pirelli tyres can be yours for Rs 1.07 lakh. When it is launched in March, TVS Motors says that the ABS variant of the bike will retail for Rs 1.15 lakh. With its competitive pricing, stylish looks, and attractive spec list, the Apache RTR 200 4V couldn’t have come at a better time for diehard Apache fans looking to move to something bigger up the food chain.