The MV Agusta Brutale 800 may be one of the entry-level bikes launched by the Italian superbike manufacturer later this year in India. We take a look at how it stacks up against two bikes in a similar price bracket, and with comparable power output 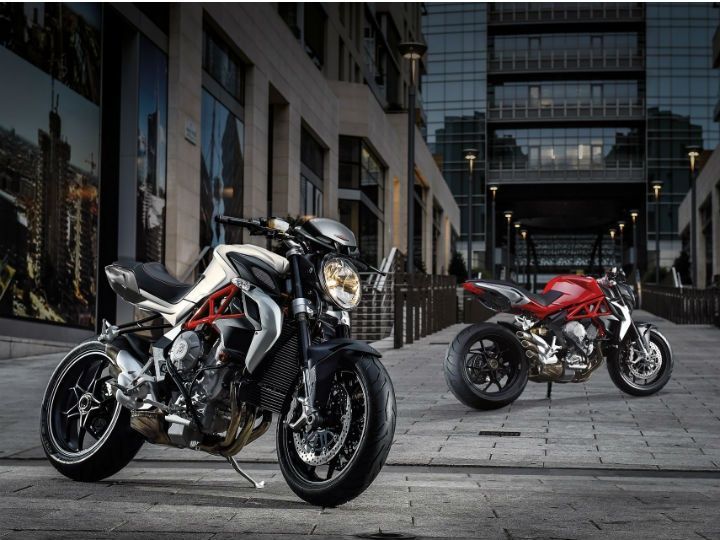 Come November, legendary Italian superbike brand MV Agusta will launch their bikes in India in association with the Kinetic Group. Imported as completely built units (CBUs), the MV Agusta range will though come at a price. And one of the entry-level bikes expected is the MV Agusta Brutale 800.

The Brutale 800 is not a litre-class bike, unlike the Triumph and the Kawasaki in this spec comparison. But the Brutale 800 makes comparable power to both the Speed Triple and the Z1000 and will be sold in India in a similar price bracket.

Both the Triumph Speed Triple and the Kawasaki Z1000 already have a niche, yet sizeable fan following in India, for their edgy looks and entertaining performance. The MV Agusta Brutale 800 will clearly have its task cut out, to create a niche in the performance streetfighter market in India.

The MV Agusta Brutale 800 clearly has an edge in the looks department with its all-muscle naked street presence. Even standing still, the Brutale 800 screams out performance and looks stunning, from any angle.

Mass forward design, dominated by the almost completely exposed three-cylinder engine, cradled by the distinctive trellis frame on top and the compact exhaust system underneath, further adds to the striking road presence of the MV Agusta Brutale 800.

The Kawasaki Z1000 has its own unique personality. One glance and the ferocious, predatory looks of the Z1000 are certain to demand a closer look at this Japanese road warrior.

Raw appeal, animal aggression and rippling muscles – that should more or less sum up the Kawasaki Z1000’s looks. It may not be a thing of beauty for many, but the Kawasaki certainly has enough street presence to demand awe and admiration.

Looks are subjective and this is particularly true for the Triumph Speed Triple. The bug-eyed Triumph may not appeal to everyone, and to some it may even be odd-looking. In fact, the Speed Triple was also one of the original production streetfighters, when the trend of stripping faired sportbikes down to their elemental core, when the first naked streets were born. It’s more or less a love it, hate it styling, but there’s no ignoring this streetfighter.

The Kawasaki Z1000 has the most potent engine in this comparison. And it also has the most number of cylinders. The 1043cc in-line four cylinder, liquid cooled engine makes an impressive 142PS of power at 10,000rpm and a meaty 111Nm of torque at 7,300rpm. Those are impressive numbers, and with the refinement and performance the Kawasaki parallel-four engines are known for, this is one package which is very attractive for the performance enthusiast.

The Triumph Speed Triple also is a litre-class machine, and as the name implies, this Brit streetfighter has one cylinder less than the Kawasaki. But it hardly matters. In fact, the parallel three-cylinder set up is one of the most refined mills and with the performance and usability the Speed Triple offers, it offers a lot of entertaining performance. In terms of pure numbers, the liquid cooled in-line triple makes 126PS power at 9301rpm and peak torque of 105Nm at 7797rpm.

The MV Agusta Brutale 800 has the smallest engine in this comparison. Like the Triumph, the MV Agusta also is an in-line triple, but it’s got less displacement at 798cc. The MV Agusta’s three cylinder engine features 12 valves, and it makes the same amount of power as the Speed Triple - 126PS at 11,600rpm and peak torque of 81Nm at 8,600rpm. So, if you’re one who thinks there’s no replacement for displacement, think again. The Brutale 800 makes the same amount of power as a litre-class bike and it’s still less than 800cc. Add to that, exclusive technical solutions such as the counter-rotating crankshaft, used in MotoGP but never seen on any other production bike, and the MV Agusta suddenly seems like a gamechanger.

The Triumph Speed Triple is one of most affordable litre-class sportbikes available in the market, considering it’s brought in as a CKD to India.  At Rs 11.6 lakh ex-showroom, the Triumph offers all-muscle naked hooligan creds to critically acclaimed levels of performance. The smooth in-line triple motor with its wide powerband across the rev range makes the Speed Triple one of the most entertaining streetfighters on sale now.

The Kawasaki Z1000 on the other hand, is brought in as a CBU and therefore, the price is slightly on the higher side. At Rs 12.5 lakh ex-showroom, it’s almost a lakh dearer than the Speed Triple, although there still are quite a few fans of this green monster. With agile handling and a super refined four-cylinder mill with all that power, the Z1000 is still a lot of motorcycle in this price bracket.

The challenge then will be for MV Agusta. Prices for MV Agusta bikes in India will range from Rs 12-33 lakh, and considering the MV Agusta Brutale 800 is one of the entry level offerings, it is likely to be priced at the lower end of the price range.

Didn't get the code? Resend OTP
Request OTP again in 00:30
rvmp_otp
rvmp_n_gpopup
View All
View All