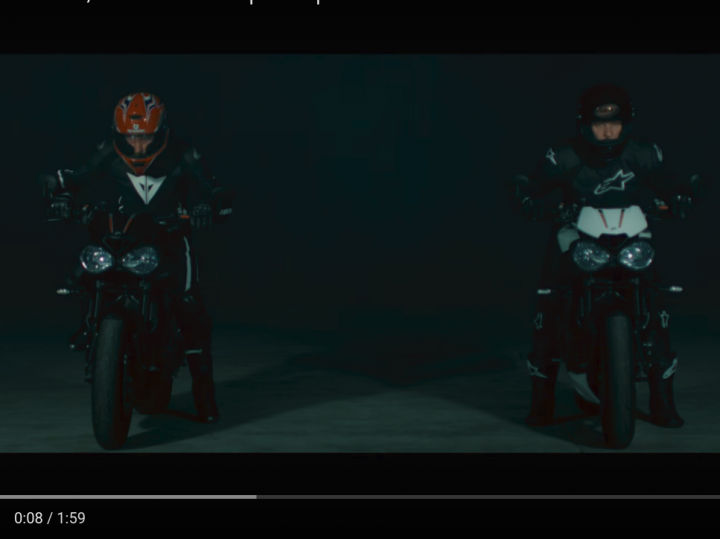 Triumph will be unveiling the 2018 Speed Triple worldwide on February 5, 2018 and to that effect has released teaser videos of the bike. While the overall silhouette remains the same as the outgoing 2016 model sold abroad, it seems to get quite a few features from the new Street Triple RS and the Tiger 1200. The changes point to the introduction of a third variant in addition to the S and R models, given the popularity of the new Street Triple, especially in its RS avatar.

The 2018 bike in the teaser video appears to carry over the large TFT colour screen and switchgear from the Street Triple RS. A quick pan towards the gearshift lever suggests that the bike might get a quickshifter. Another scene shows twin underseat Arrow exhausts which might be a standard fitment in the top-spec model. Other updates are new 5-spoke alloy wheels in place of the current 10-inch ones.

The second teaser video is a more entertaining and informative one. It shows seven-time world champion Carl Fogarty and two time Isle of Man TT winner Gary Johnson engaged in a dogfight on an abandoned airfield astride the 2018 Speed Triple. The video portrays the new bike’s brutal acceleration, agility and braking prowess. While we do not doubt the riding skills of both riders, given the wet riding conditions, they might have some assistance possibly from a new IMU-based traction control system and cornering ABS.

The 2016 Speed Triple, in its R trim, already sports high-spec fully-adjustable Ohlins 43mm NIX30 upside down front forks and Ohlins TTX36 rear monoshock damper. For the RS to up that, it will have to come with a semi-active suspension system, like the WP ones on the 2018 Tiger 1200. The RS bikes in the video, however, seem to use an Ohlins unit.

While more details are awaited, it is safe to assume that the new bike might get a slight bump in power and torque. The 2016 Speed Triple sold abroad makes 140PS of power and 112Nm of torque. Triumph India still sells the 2014-spec bike in India. While we did not get the 2016 update, it is highly likely that the brand might bring the 2018 Speed Triple in S and RS trim here. The 2014 Speed Triple costs Rs 11.49 lakh (ex-showroom). If Triumph decides to bring in the new bikes here, we expect the 2018 Speed Triple S to cost close to Rs 12.5 lakh and the Speed Triple RS to retail for around Rs 16 lakh (ex-showroom).