Tata Motors’ new Tigor is a cub that has just strolled into the sub-4 metre sedan pen. Is it packing more than just striking looks? We spend a day to find out. 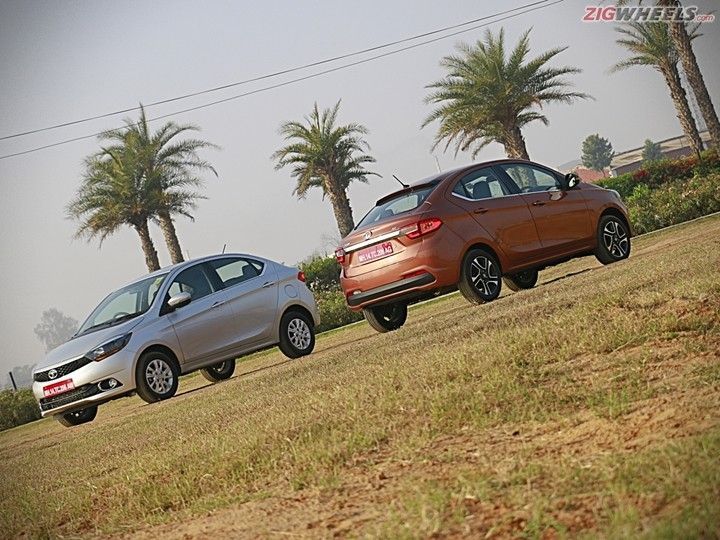 This is Tata Motors’ new sub-four metre sedan, the Tigor. Under the skin it may be distantly related to Tata’s segment-pioneering Indigo eCS, and it is expected to follow a similarly sensible approach in terms of price as well. But where this Tiago-based sedan differs, very obviously, is in terms of its appeal. But does it have the substance to get car buyers excited about sub-4 metre sedans, and a Tata?

Right from the start, Tata Motors had planned to make a sedan on the Tiago hatch as well. No surprises then that the two cars share a lot, on the surface and under it. Viewed right from the front the Tigor looks just like the Tiago, but subtle tweaks mark this out as the richer package.

There is a black surround for the headlamps, which feature a double-barreled layout and projector lamps too. The grille also gets a new hexagonal pattern.

The changes start in earnest as you view it from the side. The Tata Tigor is longer than the Tiago by 246mm and part of this is down to the wheelbase having been stretched by a massive 50mm. At 2450mm, the wheelbase is longer than a Maruti Swift Dzire. This increase in wheelbase and the larger rear doors have made the Tigor a proper redesign.

The roof arcs down into the stubby, high-set boot. The hexagonal pattern can be seen in the slim, split tail lamps too. There is a smart fused LED strip at the bottom of the unit and the way the chrome strip that runs along the boot lid flows into the lamps is cool too.

The stance seems to be of a car on the move as the shoulder line inclines from the high-set boot down into the front headlamps. While 15-inch rims on the petrol variant (up from 14-inchers on the Tiago) look handsome, we feel wider tyres and 16” rims would have given it an even better stance.

Sense of a Sedan

With 419 litres of boot space, the Tigor is championing practicality. Just for the record, the Tigor’s boot space is more than its elder sibling, the Zest. This is thanks to the use of special four-bar hinges that do not eat into the storage space when the boot is closed. This also helps to create a wide boot opening, but a taller opening would have been welcome too. Also, the lack of a boot opening switch on the boot lid is extremely irritating. The other option to open the boot is via an electrically operated switch on the centre console or to use the switch on the key fob.

Open the large rear doors, step into the backseat, and be prepared to be in for another surprise - there is a generous amount of room here! Yes, this might have a small footprint, but even big passengers can spend time here for long distances. Good headroom and knee room are complemented by large window openings to create a great sense of space.

Sitting three abreast for average-sizes adults can be reasonably comfortable for short city jaunts. The seat cushioning is soft and they also come with large integrated headrests. There is an armrest with cupholders on offer as well.

In its bid to create a richer experience, the Tigor offers more equipment compared to the Tiago, as seen on the top-end XZ variant that we had for test. There is a new 5-inch touchscreen infotainment system from Harman and it even has a reversing camera. It has all the connectivity options necessary too. And with a four speaker and four tweeter system, the sound quality is spectacular.

However, the touchscreen is a bit laggy in terms of responses to swipes, and the colours could be richer and brighter. The ConnectNext set of apps includes an app for emergencies. However, the suite of apps are only available for Android devices as of now.

This top-of-the-line XZ variant is offered with automatic climate control, and while the large rotary dials look good and work well, the blank space in between looks awkward. Also, the AC is super effective, albeit a bit loud even at its lowest setting.

The Tigor is also packed with storage spaces - there are plenty of cubby holes on the dash and centre console. And the additional storage space for a phone on the floor console and an additional charging socket will be very handy for passengers in the rear. The rear door pockets can also accommodate a large bottle of water but the front door pockets aren't as big.

The glovebox has a nicely damped release and there are neat storage spaces inside it. The elephant drawing tucked away inside is carried over from the Tiago. Use of textures and patterns is very clever and playful. Colour-coded panels for the dash add to the sense of style inside the cabin. But, things could be better - the light grey plastic looks aged right from the start, and the finish of the plastic parts' edges feels a bit rough. Also, when you get going you realise that a lot of road noise, engine rumble and wind noise is quite audible in the cabin. If these finer points could be taken care of, time spent in the Tigor would be quite satisfying and relaxing.

The Tigor carries over the 3-cylinder petrol and diesel engines from the Tiago. While the power and torque outputs are the same, there are subtle differences in the calibration. Both variants also carry over the 5-speed manual gearboxes. However, to get the required sense of peppiness on the heavier Tigor, the overall gearing has been shortened.

The petrol engine is also counterbalanced for greater smoothness and it feels that way too. Now, this engine is actually quite peppy. It happily trots forward in response to light dabs of the throttle. Low-speed responsiveness makes it quite handy for the city and since it's willing to rev, it cruises well on the highway too. However, when you put your foot down hard to really get going, the performance isn’t that eager. This is because of the tall gear ratios; for instance, you can hit an indicated 138kph in third gear! While such tall gearing is good for fuel efficiency it dulls the responsiveness. This strange compromise has to be made as the Tiago was already quite a heavy car and the Tigor is a bit heavier still.

The diesel motor is a bit of hard work as the turbo kick hits home just past 2300rpm and then fizzles out by 3500rpm. As a result, you have to keep working the gearbox to make any quick progress. Also, we found the shift from 2nd to 3rd to be a bit tricky. The Tigor deserves a larger diesel engine to really complete the package.

While the design and the components are the same as the Tiago they have been retuned to suit the Tigor’s weight and weight distribution. And, as you go over rough patches it is immediately apparent that the suspension setup is a clear highlight. It soaks up really big bumps with grace. It doesn't crash over bumps or through ditches. And, even though it doesn't feel firm, body control is good!

The petrol Tigor uses bigger 15-inch rims with 175/60-section tyres, while the diesel uses 14-inch rims with 175/65 tyres. As a result, they feel a bit different in the way they ride and drive. The diesel variant moves around less at higher speeds and as a result feels a bit calmer for covering highway miles. And even though you do feel a bit more of the poor surfaces in the petrol, keep in mind the ride quality is still pretty good.

On the upside, the lighter petrol feels more eager and communicative when you are chucking it into corners. The electric steering also weighs up well and seems to offer a touch more feel in the petrol. Although the Tigor isn’t too enthusiastic about attacking a set of corners, its calm nature and unruffled manners make it very likeable. However, we would have liked more bite and feel from the brakes.

We had huge expectations from Tata’s Tigor and when it comes to the design, it has created, in our books, the benchmark for the sub-4 metre sedan category. The level of equipment is also tempting. However, it's the genuine sedan-like values that really shine through. The large boot and the spacious backseat are the clear highlights here. Even though we would have liked a bit more punch from it, the petrol engine is our pick of the lineup.

The diesel, however, is disappointing and needs more refinement and enthusiasm to do justice to the rest of the mechanical package. Even the quality of plastics and better sound insulation would go a long way in making the Tigor stand out in the sub-4 metre segment space. And with a price tag expected in the range of Rs 4.2 lakh - Rs 6.5 lakh, the Tigor could very well be picking off larger sub-4 metre sedans and hatchbacks in its price range!