Could less really be more when it comes to the KTM Adventure family? 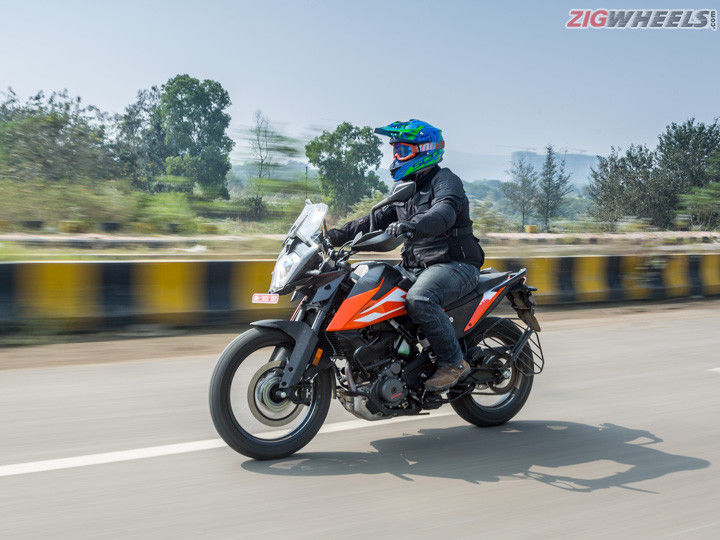 KTM’s big splash in 2020 was the arrival of their Adventure family. Leading the charge was the 390 Adventure and it surprised us by being a more road biased, touring-focussed motorcycle. Now KTM has brought a “lesser” Adventure to showrooms - the 250 Adventure. But, does lesser horsepower, displacement along with a lower price tag make it a better tourer for most motorcyclists?

Structurally the 250 looks the same as the 390 adventure. The orange and black combination here isn’t as visually arresting as on the 390, where the orange tank really pops! However, the darker black and orange combo has a sweet stealthy attitude. In terms of parts it is largely the same - It has the same tank, same wheels (19 front, 17 rear) and same tyres too. Currently, even the 390 Adventure is being shod with MRF’s Meteor rubber, instead of the imported (hence, hard to come by) Metzelers.

It also offers the 12V charging socket like the 390 ADV. Some other tweaks like cast footpeg hangers on the 250 instead of the forged units on the 390 have also been made to save costs. But there is an obvious cutback, as the 250 misses out on the LED headlamp and the colour TFT screen when compared to the 390 Adventure.

The premium commanded by the Adventure over the Duke is harder to swallow in case of the 250 when compared to the 390. The Rs 46,000 difference between the 390 versions is better justified as the 390 Adventure packs lean-sensitive traction control while carrying over all the other hardware from the Duke. In the case of the 250s, the Adventure lops off the LED headlamp from the feature list and doesn’t add anything further. Instead it gets halogen lamps surrounded by a LED DRL. Hopefully, like they did with the 250 Duke, KTM will do away with this forced differentiation soon.

Softened it, have they? The saddle height still measures in at 855mm and that means 5’6” riders, like this tester, will be on tip-toe. The slimness of the motorcycle, however, makes the actual experience less cumbersome than the on-paper number suggests.The suspension travel, 170mm front and 177mm rear, and 200mm ground clearance is on-par with the more powerful ADV. The use of a larger radiator, the adv-spec geometry for the trellis frame, and the longer swingarm means the dimensions aren’t any lesser either. So it’s no surprise that KTM claims that the kerb weight is also identical to the 390 ADV.

The only thing that has softened, compared to the 390 Adventure, then is the engine. The 250 Duke’s engine has been one of the most versatile and friendly engines from KTM and it makes the same 30PS and 24Nm of torque here too. But, the more linear power delivery of this engine combined with the undiluted 390 ADV chassis sounds good, right?

In the city, the Adventure feels like the Duke on stilts. The engine is zippy and likes to be worked, and considering the slick six-speed gearbox and light clutch, you don’t mind doing so at all. The sense of quickness is also because of the way the KTM steers. The steering is direct and the suspension is firm, so it lets you slice right through traffic. Keep in mind that the Adventure doesn’t quite smother potholes, and ends up sending sharp jolts your way with regularity. The firm seat doesn’t help either, feeling too firm for short jaunts and refuses to pad you from the blows either.

If you are a seasoned traveler, how will the 250 Adventure fair? This KTM feels at ease covering ground at a healthy pace, with the digital display reading between 90-100kmph. The engine is smooth and the most responsive between 5 - 6500rpm getting from between 80kmph to 100kmph comfortably. The 250 Duke also returns 35kmpl on the highway affording you longer stints between fuel ups too.

However, the 250’s appeal then is dulled by the moments between the open stretches, the fair majority on most days and trips. Below the 5000rpm mark the ADV doesn’t pull eagerly, so you end up having to make one or two gear changes for every slow lorry or incline. Revving it up isn’t as much fun as we remember on the 250 Duke either, as power doesn’t build as quickly or smoothly. So having to rev it frequently doesn’t feel all that rewarding. In our tests the 250 ADV is two seconds slower than the BS4 250 Duke. The 8kg weight difference between the Duke and Adventure will account for just a little of that; it’s the ADVs tendency to bog down when launched, and the BS6 updates that will account for a larger chunk of this gap.

It is also safe to assume that most people who tour do so to unwind. However, that isn’t possible on the 250 Adventure. The direct steering and the firm suspension make sure you are amply aware of the road surface. KTM says the suspension setup is in the same tune as the 390 Adventure, which is stiff. So, unsurprisingly the experience isn’t very different and so when you get on to broken roads, you will have to keep your eyes peeled to dodge any rude potholes. You are also ruffled a bit as the windscreen lets enough wind rushing your way that some, albeit light, buffeting is constant. Quite simply, on the 250 Adventure, your focus can’t be on the scenery around you, it has to be firmly on the motorcycle and its needs.

However, if you are looking at raising your heart rate and not slowing it down, the 250 Adventure is an enjoyable tool for the task.The quick steering aided by the MRF rubber lets you have lots of supermoto-style fun. The tyres felt perfectly adequate on the road, offering enough grip and feel to give you confidence in corners, but aren’t grippy enough to raise concerns of longevity. Thankfully slowing the 250 Adventure from highway speeds is not an issue, stopping from 100 kmph to a dead halt in 49.11 metres. Although switching to the 390 Adventure’s sintered brake pads will help bring back much needed feel at the lever.

Purely from the engine standpoint, the 250 Adventure is a far friendlier motorcycle to get going with on rough roads. Despite the change in power delivery, the 250 delivers its torque in a much more predictable and manageable manner. This calmer pace puts less stress on the suspension; so, unlike the 390 the suspension doesn’t feel woefully inadequate here. Nonetheless, it is still firm. So newer riders will find it intimidating as the quick steering and the firm suspension make it information overload. For the same reason trail riding isn’t natural on this KTM either.

However, there is a way to enjoy the 250 Adventure, and that is to stand up and ride. When you do, the directness of the steering, the slimness of the chassis and the predictability of the engine make it obviously KTM - requiring commitment and a lot of braap! The lack of traction control is a boon as it doesn't cut in unnecessarily and having less frills to worry about (LED headlamps, colour screen) means you can ride with less weighing on your spirits. So, if you were looking for a fun companion to train on for future rally-raids, this would be an interesting option.

The 250 Adventure is a difficult motorcycle to sum up, such is the way it has taken the good and the bad from the 250 Duke and the 390 ADV. For those looking to clock a lot of kilometres on the highway, the more potent 390 ADV will be a more purposeful package. The better fuel efficiency, lower price tag for the 250 Adventure make it a more sensible choice for many riders. However, it is a motorcycle that demands you to adapt to its nature and needs, rather than the other way around. Most riders would happily learn to work the gearbox more often, or live with the slight buzz at the pegs, or the less than ideal wind protection, only and only if the suspension could offer you the luxury of bashing, rather than dodging, potholes. So, the 250 Adventure gives us a slice of KTM’s Ready to Race attitude, in a more wallet friendly avtaar. But, we can’t help but marvel at what could have been if it had a bit more of Ready to Glide in its soul instead.