Blatantly endorsing the fun side of motorcycling and giving street-riding a whole new meaning, the KTM 200 Duke is everything it promised and more. Our very first ride on this Indo-Austrian bloke proudly flashing its orange livery 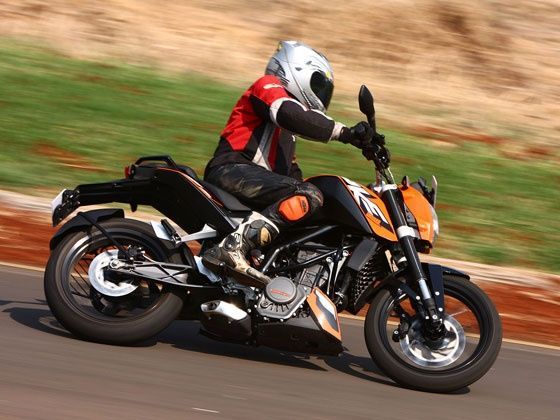 The guitar-shaped test-track at Bajaj Auto’s Chakan facility offers some interesting tight corners as well as a high-speed bowl and then a long straight which leads into the final sweeping left-hander. I have about half a day long date with a motorcycle that all bikers in the country have been eagerly waiting for – the KTM 200 Duke. Envy? Be my guest. It is a machine that is nothing like what we have ever seen on our Indian roads. The orange veil of Austrian charm has been covering my vision ever since I attended a special feedback event for KTM motorcycles organised by Bajaj Auto about four years ago in Pune where the company unveiled some of the KTM superbikes to get reactions from bikers in the country. Obviously then the excitement has been very difficult to contain all this while.

But the wait has certainly been worth it and more. I say this after having spent considerable amount of time with the KTM 200 Duke for most part of the day wringing its throttle on the Bajaj test-track showing no mercy. Just a glance at the orange machine gleaming in the afternoon sun would compel even the most blasé observer to not only sit up and take notice but would force him to jump on the saddle of the KTM 200 Duke without hesitation. The radical and absolutely in your face bearing of the 200 Duke is so neatly executed by its makers, that despite looking like its come from another planet, it has a very welcoming and inviting poise that just cannot go unattended. This is the best-looking motorcycle that the Indian market has ever witnessed till date and there are no two ways about it.

As minutes passed drooling over this gorgeous motorcycle, soon it was time to get onto the saddle and ride. Without wasting a minute more I hopped onto the bike allotted to us but even before I could thumb the starter, one thing instantly evident was the bike’s road-friendly ergonomics, true to its street-fighter genes. No unnecessary tries at making it best of all worlds with tourer-friendly laid-back yet sporty two-piece clip-ons or a feeble effort like some of its rivals to club racing ergonomics with comfort in one package. This is an out and out naked hooligan for the street who is utterly shameless about its arrogant character and one who does not feel intimidated nor threatened by anything the rider has to throw at it. Within the early few laps itself the KTM Ready to Race genes came to the fore in a, if I may call it, brutal manner throwing non-stop bursts of power and torque no matter what gear and speed I was in.

Technical Highlights of the KTM 200 Duke

KTM 200 Duke: What it really means

Certainly the best in-class power-to-weight ratio of 184PS/tonne has a lot to do with the way the bike lurches forward in each gear with the enthusiasm of a 16 year old as well as the fact that the torque is evenly spread out through the 6-speed transmission to present the 200 Duke with incredible roll-on acceleration at any point of time. With a slightly taller first gear complimented by short second, third and fourth gears, the 25PS of power and 19Nm of torque flowing seamlessly through the rev-range are extremely well calibrated for enthusiastic riding making this orange bloke one hoot to ride. Also, one of the chief reasons why the KTM 200 Duke feels so energetic and eager to be revved is because of the superbly configured electronic fuel injection system, which provides excellent throttle response to the slightest input from the right wrist.

Riding through some of the fastest sections on the test-track, the KTM 200 Duke held onto the lines with razor-sharp precision aided by top quality suspension bits from WP on both ends doing a fantastic job of providing accurate feedback about what is going on between the tyres and the road. Even at speeds upwards of 130km/h, the 200 Duke required only a faint encouragement to turn and it swiftly changed its direction devoid of any unsettling behaviour. The company has been able to manage this kind of handling prowess and dexterity thanks to the well-engineered mass centralization by keeping all the chunky components (airbox unit, exhaust system) closer to the Centre of Gravity (CoG) of the machine, thus presenting the bike with a light front-end that allows for quicker yet stable initiation of turns while the 1367mm of wheelbase coupled with fat sticky radial MRF tyres on both ends awarding the KTM 200 Duke with necessary stability at speed.

So we have a motorcycle that makes enough horsepower to keep the throttle wrist happy all the time and has handling to go with it that leaves a wide grin inside the helmet. However, the KTM 200 Duke is a street-naked motorcycle that will truly shine in real-world conditions and not on a test-track like what we had. Head to the nearest hills or then take it out on the crowded city streets dodging traffic and going past vehicles like an orange flash of lightening. The KTM 200 Duke comes closest to what every hardcore biker in this country has been waiting for – a stylish yet practical machine that is quick, agile and loaded with state-of-the-art equipment. And thanks to Bajaj Auto’s expertise at low-cost manufacturing, we know for sure that once officially launched in January 2012, this will be one hell of a cracker at one hell of a bargain!

Technical Highlights of the KTM 200 Duke

KTM 200 Duke: What it really means