With seemingly no direct rivals for the mini adv, is the BMW G 310 GS the right choice? More importantly, is it worthy enough to wear the GS badge of honour? 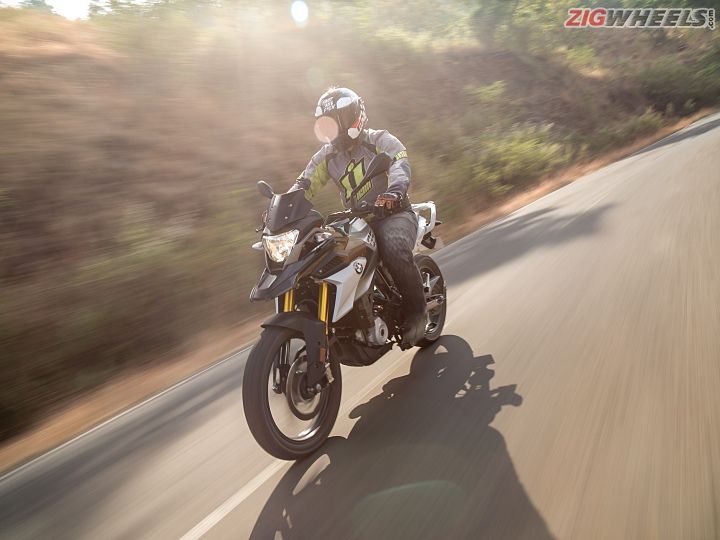 Much has been spoken about how BMW Motorrad India has slapped a ridiculously high price tag on the G 310 twins. After taking a short spin on the two bikes around their HQ in Delhi, we could still stick our neck out and recommend the G 310 GS as it splits the Royal Enfield Himalayan and the Kawasaki Versys-X 300, making for a more sensible choice. We finally got to spend a week on the baby GS and we wanted to check if this obvious choice was the right choice. And in doing so, whether it was befitting the GS brand.

How adventurous is it?
Diving straight into the action bit, we took the GS into what should be its natural habitat - off road. And straight away, there were a few issues that we encountered. First, the moment you stand up on the pegs, you will find that the handlebars are set too low. It just puts you in an attacking stance and indirectly you end up loading the front end more than what you wished for.

And speaking of loading up the suspension, the Kayaba-sourced units are softly sprung. While both of them offer 180mm of wheel travel, they do need better tuning for off-road riding. The front suspension setup is good enough to take in the small bumps but it feels nervy on the whole. The rear, on the other hand, is pretty weight sensitive and will require you to adjust the preload settings for varied types of riding. With my 100-kilo frame, it does bottom out quite easily, even when it is set at the fourth-from-softest setting.

The 19/17-inch wheel setup is similar to modern adventure tourers and this one comes shod with Metzeler Tourance tyres. The dual-purpose rubber does a great job of keeping the bike upright even when you are taking on some nasty off-road patches. But I would have liked to see spoke rims, though that again might have escalated the already high asking price.

Unlike the R, the GS gets an option to kill ABS intervention on the rear wheel. On dirt, it does come in handy when you want to lock your rear wheel heading down trails. While rear brake lever travel is a bit much, the rear does lock up quite nicely when you need it to.

However, this is not a “go-anywhere” motorcycle by any means. It doesn’t have adequate off-road crash protection and even the stuff that it does offer, like its plastic belly pan, does not aid your confidence when going over rocks. The biggest hindrance comes from the engine. It does not have torque lower down the rev range to help you crawl over obstacles. You will have to wring open the throttle a fair bit to keep it going steadily, though not as much as something like the Versys-X 300,
which needs to be kept constantly higher in the rev range.

Is it good at touring?
The upright, commanding riding posture does give you a good sense of the road ahead. The view is spot on for some mile munching. And thank god for the tail rack which allows you to load your luggage quite easily without having to make special arrangements for the same. A word of caution though - as mentioned previously, you will need to bump up the preload accordingly on the rear monoshock unit for the added weight and in case you are riding with a pillion, a fairly high setting is advised. That said, it is not a comfortable place for your travelling companion. The seat is plush and the grab handle is chunky, but he/she will feel cramped soon. It’s best reserved for city commuting then.

And then there is the buzz. Ride it at any triple-digit speed in sixth gear, and the G 310 GS becomes a highly resonating tuning fork. You will immediately get the sensation at the pegs followed by the tank and the seat. There is some tingling sensation at the bars but it is not as apparent as the other large cubic capacity singles, like the old KTM 390 Duke or the TVS Apache RR 310. Lowering the speed to around 80-90kmph feels fine.

Also, if you are planning to do many highway stints, do not forget to reinstall those rubber inserts into the serrated footpegs. Removing that rubber is great for off-roading, but without it, the vibrations at the footpegs can get really annoying on the highway. Even your pillion will complain, as the vibes add to the cramped seating posture, making it more uncomfortable.

In an ideal situation, the BMW G 310 GS manages to return a highway fuel efficiency figure of 31.94kmpl. Dial in the 11-litre fuel tank and it should be good for a range of around 352km which isn’t bad. But that is in ideal conditions. Slightly spirited riding and extra weight added on the bike, due to luggage or pillion or both, and that figure is bound to drop. Also, 11 litres is not exactly adequate for an adventure tourer. So you are realistically looking at a range of something close to 300km, which isn’t too bad either, but nothing to write home about.

It must have good performance?
The BMW G 310 GS weighs 169kg (wet) which is identical to the TVS Apache RR 310 and 11kg heavier than the BMW G 310 R. The tuning of the 313cc single is same as the R with 34PS and 28Nm on tap and no changes to the final drive ratio. As a result, there is not much difference when it comes to the actual performance numbers. It takes 3.12s to go from 0-60kmph and 7.57s to get to 100kmph, which is marginally slower than the R with a tenth off in the latter run.

It does not feel remotely as peppy as the R as the extra weight tends to slow it down. Even the soft suspension setup adds to this. There is quite a bit of bucking and squishing while accelerating or decelerating and that takes away the excitement if you’re trying to ride spiritedly.

Is it sporty?
Given that the GS is more raked out, has a larger 19-inch front wheel and has a longer wheelbase than the R, it was never going to be as corner friendly as the naked. However, it will be more than happy to take those corners in a calm and composed manner. It is extremely capable when leaned into the corner, but it does take some effort to tip it in.

Start pushing and the GS will show its frailties. Again, the soft front suspension takes away a bit from the fun and the top-heavy nature detracts you from going harder into the bends. If tuned well, the rear suspension does limit a bit of the wallowiness but then increasing the preload also means that you will feel any mid-corner bumps right up your backside.

Even though it runs the same brake setup as the R, the brake feel is a bit watered down. This might be down to the fact that BMW has tuned the system to work well in off-road conditions, where you do not want very sharp braking. The front end dive is unnerving, to say the least. Surprisingly though, it manages to stop quicker than the Apache RR 310 - 33.47m when coming to a standstill from 80kmph and 20.02m from 60kmph. The TVS sportbike takes 37.49m and 20.69m for the same.

Can it at least commute stress-free?
This was one of the places where we least expected the GS to do well. Let’s just get over the bits that you will have to get used to, to enjoy the bike. Firstly, it is not as peppy as the R. It does not have much low-end torque and does stall quite often unless you open the throttle a bit more. Then, the front end dive is a bit much to take into. The commanding posture means shorter riders will find it a bit tough to get on to the bike, and even quickly get their feet on the ground in case of an emergency. You have to also be wary of where you are parking the bike as it stands freakishly upright on the side stand, and gives you a feeling that it might tip over anytime.

I know these are much to take into account but once you get the hang of it, you will rather enjoy the motorcycle through the city. The suspension soaks in the city bumps with grace. Watch out for that rear unit though, which might just give you a good jolt if bumps are not taken carefully. The commanding view helps here as well as you can prepare well ahead for the traffic scenarios in front of you.

The engine is supremely tractable. It can pull from as low as 35kmph in fifth gear all the way to triple digits. The sweet spot here is 3500-4500rpm where the engine settles into a nice sweet rhythm. While roll-on figures of 4.25s for the 30-70kmph in third gear and 5.23s in the 40-80kmph in fourth are slower than the R, it is in the same ballpark as the Versys-X 300 and significantly quicker than the Himalayan. Plus, the city efficiency of 37.39kmpl is highly commendable.

So, what are you saying?
As a mini adventure tourer, the BMW G 310 GS fails to impress us greatly. It just about does the adventure and touring bit well and if we are talking performance, it could have been tuned differently. Even different suspension tuning could help its case immensely in increasing the fun quotient. The only place where it impressed us is in the urban jungle. Add to that the fact that it looks big and the build quality is top notch (sparing a few blemishes). It does have better road presence than the G 310 R too. In fact, it does look like a GS.

Sadly, it does not feel like a GS. The only GS bit about it is its high asking price of Rs 3.49 lakh (ex-showroom India). And after spending a whole week and not just a short stint, it does not seem like an obvious choice. And with the impending launches of the Hero Xpulse 200 twins and the KTM 390 Adventure, you are better off waiting and watching.