Is a 125cc bike worthy of the Pulsar badge?

Accessibility! Now, this is a word which has been popular over the past few years. From premium smartphones to luxury cars every brand wants to make their products more accessible and thereby increase sales. Bajaj too have done the same by making the Pulsar brand easier to access by riding in the new Pulsar 125 Neon.

Another reason for launching the new bike is that the introduction of the new ABS norms for bikes above 125cc capacity have made them more expensive. Understandably it’s the most affordable Pulsar that you can buy, but has Bajaj gone too far in milking the Pulsar brand or are we in for a surprise?

The most interesting aspect of the Bajaj Pulsar 125 as its name suggests is its new 125cc engine. The 124.4cc motor is based on the Pulsar 150’s powerplant and has the same bore but the stroke is shorter. In terms of numbers, the baby Pulsar is the second most powerful 125cc bike on sale in India after the KTM 125 duo and it isn’t too far off from the Pulsar 150 which produces 14PS and 13Nm.

In terms of performance, the Pulsar 125 does feel quick, peppy and that typical Pulsar exhaust note adds to the drama. But, there’s one problem, it isn’t the quickest 125cc bike out there. And no, I am not talking about the KTM 125 duo. In our performance test, the Glamour managed to out accelerate it and now that's something we never saw coming for a Pulsar! But I must mention that the engine is quick revving and in terms of feel, the Pulsar does feel swift and has a fun element something that its rivals don’t offer.

And if that wasn’t enough, even in the roll-ons (40-80kmph) the Pulsar is slower. Surprised? Let me explain, the Pulsar 125 shares its underpinnings with larger displacement Pulsars and this has resulted in a high kerb weight of 140kg. In fact, the Pulsar 125 is the heaviest 125cc bike on sale and that too by a significant margin.

And while the chunky tyres do look cool, they also increase the strain on the engine by offering higher rolling resistance. So on paper, it leads the charge, but in the real world, the baby Pulsar isn’t the quickest.

One aspect of the motor that impressed us is the refinement and that can be credited to the counter balancer. At city speeds NVH levels of the new offering are among the best among all Pulsars on sale.The 5-speed gearbox is up to the task, however shifting from 1st to 2nd sometimes can be notchy and the heel-n-toe shifter looks very commuterish on a Pulsar. The Pulsar 125 feels comfortable cruising at 80kph at around 6,000rpm, but once you go above it, the engine starts feeling strained and one can feel minor vibes on the seat, footpegs and handlebars. Talking about fuel efficiency, the Pulsar 125 returned us 57kmpl on the highway and 51.5kmpl in the city. Compared to its traditional 125cc rivals, the figures are slightly low. However, the baby Pulsar does have a slightly larger tank capacity than its competitors at 11.5 litres.

The Pulsar 125 is the only 125cc bike on sale to get clip-on handlebars. However, the bars are raised and the footpegs are centre-set, which means the riding position is upright and comfortable. Seat height of the Pulsar 125 is low at 790mm and it’s accessible for most riders, but, the seat cushion is on the stiffer side.

The chassis, suspension and the tyres on the new bike have been carried forward from the Pulsar 150 Neon. Despite its high kerb weight, it feels easy to steer in traffic, however it isn’t as agile as its lighter rivals. And show the bike some fast sweeping corners and it faces it rather well, but push a bit hard and the tyres start feeling nervous. Suspension setup consists of telescopic fork and twin shock absorbers. Ride quality feels supple at city speeds and the bike manages speed breakers and bad roads in an effortless manner. But on sharp bumps, the rear does feel a bit firm.

The Pulsar 125 gets disc brake as an option and in our opinion the Rs 2,600 premium is well worth it given the better braking performance. The disc brake offers good bite, but the lever action is slightly soft. This has been done as most commuter owners are used to drum brakes and this will aid them in modulating the disc brake in a better manner. Also, the CBS unit works well in avoiding the rear tyre from sliding. In our braking test, the Pulsar 125 took slightly more stopping distance and this can be due to the soft lever action and the TVS rubber which isn’t the grippiest tyre available.

In terms of styling the baby Pulsar looks the same as the Pulsar 150 Neon and that isn’t a bad thing. Despite being present for over a decade, the Pulsar styling is still appealing and by 125cc standards the Pulsar 125 does make a statement. It’s also available with two gloss paint options, but our pick is the matte shade as it makes the bike look sportier.

Talking about features, the bike gets a semi-digital instrument cluster with a large tachometer and digital display for speed, fuel gauge, trip meter and odometer. It gets a standard halogen headlight, while the taillight is an LED unit. Fit and finish levels are acceptable for a bike of this segment and the Pulsar 125 is also the only bike in its category to get backlit switches.

As a 125cc bike, the baby Pulsar does impress with its performance, styling, fuel efficiency and features. And being a Bajaj, the Pulsar 125 offers good value as well. While it does have the Pulsar feel, there’s one problem and that’s the Pulsar 150 Neon.

You see for a premium of Rs 4,500 what you get is more power, better performance and not to forget the safety of a single-channel ABS. If fuel efficiency is your main priority, then the Pulsar 125 makes more sense. But, do you really want a Pulsar purely for fuel efficiency? 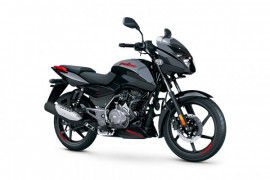 All Comparisons of Pulsar 125