Does a smaller motor necessarily mean a downgrade? We ride Bajaj’s newest urban cruiser to find out 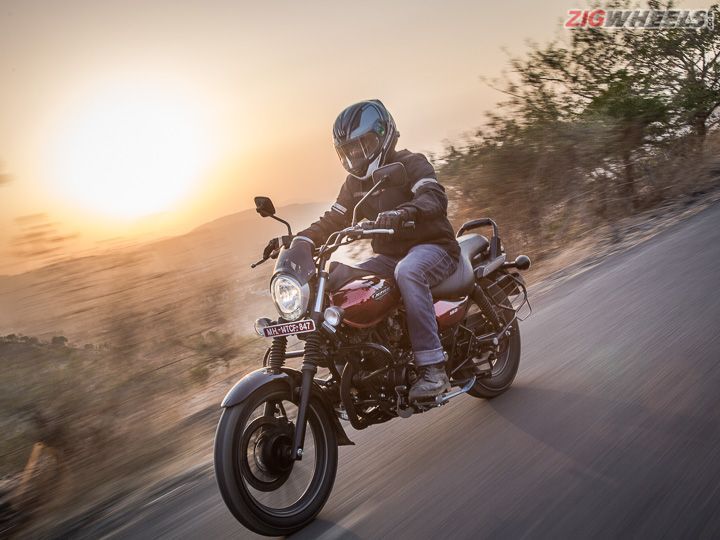 We all know “there is no replacement for displacement,” but Bajaj certainly seems to have challenged the age-old saying with the new Avenger Street 160. The motorcycle it replaces, the Avenger Street 180, was just a little over a year old. The move seems rather strange, considering that the “smaller” Avenger formula has gone from 150cc to 180cc and now to 160cc. How does it make sense as a product and also in the grand scheme of things for Bajaj? We swung our leg over the new Avenger to make sense of it.

In a nutshell, the basic design mantra of the Avenger has remained unchanged. It looks exactly like the older-generation Avenger Street 180. The peanut-shaped fuel tank, side panels, curvy fenders are all carried over from the older model. It comes with an oval headlight with an LED DRL at the bottom. However, both the headlamp and the tail light are bulb type and so are the indicators.

The instrument cluster is pretty basic. It really goes well with the minimalistic ethos of a cruiser, but for some, the lack of information might just leave them a bit wanting. It only displays the speed (analogue dial), odometer and tripmeter readings (in the digital inset). There’s a secondary cluster mounted on the tank which houses the fuel gauge, indicator, high beam and low battery light. While it might be cool-looking, it isn’t all that practical considering the unit is well below your line of sight, and you’ll have to turn your head all the way down, taking your eyes off the road (Dominar much?).

What’s new is the addition of a small ABS light in the speedometer unit. The switchgear works well but it just feels like it’s built to a price and came off one of their more basic models like the Discover. Typical of a cruiser, the ignition key slot is located under the tank, on the right, while the steering lock is positioned on the side of the steering head. Avenger enthusiasts might find this familiar, but it definitely takes newer users some time to get used to it.

The 160.4cc engine is 19.6cc smaller than the older model. However, at 15PS/13.5Nm, it makes just 0.5PS and 0.2Nm less than its larger-engined predecessor. Bajaj has really worked on the powerplant to achieve this balance. Unlike what we had assumed earlier, it’s not exactly an under-bored version of the Avenger 180’s engine. In fact, it is an amalgamation of the Avenger 180 and the Pulsar NS160’s heart. But while the bore and stroke configuration (58mm x 60.7mm) is identical to the Pulsar NS160, there’s a completely different cylinder head that runs two valves instead of the NS160’s four. That said, the gear ratios have been carried over from the Avenger 180.

As you can see, the roll-on figures for the new bike are quite close to the older one. It goes to show that the engine really excels at mid-range performance. Essentially, the entire reason why Bajaj moved to the 180cc engine from the 150cc in the first place has been almost completely negated by this new mill. What can we expect next, an Avenger 125 that’s got just as much mid-range as this 160? Jokes apart, overtaking in the city can be done without the need to downshift. But on the highway, you still need to shift down a couple of cogs if you want to pass heavy vehicles. Also, at 5.8 seconds, the 0-60kmph acceleration time is only 0.18 seconds behind the Avenger 180, which again an example of doing more (or at least as much) with less.

Once you swing your leg over the saddle, slot into gear and ride, you’ll be surprised at how refined this motor is. It’s definitely a considerable step up from the older bike’s engine as far as vibrations are concerned. There’s barely any buzz on the handlebars even when pushing the bike to its limits (read 100+kmph). But beyond 80kmph, there are noticeable vibes on the footpegs, which do tend to tingle your feet if you’re wearing thin-soled shoes. But hey, why not just complete the cruiser getup by wearing heavy boots?

The engine can comfortably cruise at 80kmph and if need be, 90kmph too. It doesn’t really complain even when you keep the throttle wide open and that’s a commendable feat by Bajaj. Plus, the icing on the cake is the deep, grunty exhaust note which eggs you to hold on to the revs a little longer than you normally would. The shifts from the 5-speed gearbox feel positive too, and there were no instances of false neutrals. But the shift throw is a bit on the longer side, and it might need some readjustment in your left foot if you’re used to slicker shifters.

The simple suspension system - telescopic forks and twin rear shock absorbers - work amazingly well on bad roads, as long as you don’t try and tackle very large bumps at speed. Like you’d expect from a cruiser, suspension travel isn’t the longest, so it can bottom out on really nasty potholes. Thankfully, the seat is extremely well padded, so it doesn’t transfer any of those jolts to the rider, or even the pillion. That said, riding at high speeds over cambered roads results in the bike feeling nervously wobbly. Enthusiasts might prefer a stiffer setup, but hey, it’s a budget cruiser made for the aam junta! And that job, it does really well!

Ergonomics are properly laid-back, thanks to the nicely scooped seat and forward-mounted footpegs. Oddly, the left footpeg is mounted slightly ahead of the right one. So when you turn the steering to full left lock, the handlebar end might come into contact with your knee, especially if you’re taller than 5’5”.

The lazy rake angle and the ridiculously long wheelbase of 1480mm might lead you to believe that the Avenger would have a very vague feeling front end and wouldn’t be a nimble handler. But that really isn’t the case. While it wouldn’t be our first choice for some corner-carving action, the front does feel stable enough through the bends. And it turns rather quickly too. But this agility is a bigger boon in the city, where darting through traffic feels easy enough - a good thing as the Avenger 160 is really more of an urban cruiser than an out-and-out highway tourer.

Normally you’d assume that cruisers lack in the braking department. Fortunately, or rather surprisingly, the front disc brake of this Avenger offers an assuringly ferocious bite. Even during panic braking, the progression is linear and doesn’t throw the bike off balance. There’s adequate stopping power at the rear too, and it doesn’t lock up that easily, thanks to the 130mm drum unit. Plus, you also have the assurance of single-channel ABS, which isn’t all that intrusive but keeps you safe just fine.

The real reason why Bajaj went for a smaller motor is to appeal to the customers’ perception that a smaller powerplant may be more efficient than the 180cc engine. It does hold true to a certain extent, as you can see in the city efficiency figure. However, out on the highway, the 180 is a little more frugal because it has to work relatively less for the same speed, thanks to the slightly extra power from its higher cubic capacity. That said, the average fuel efficiency of both the bikes are more or less the same, so out in real-world riding conditions, it doesn't really make that much of a difference.

Bajaj has got the pricing absolutely spot on for the Avenger Street 160 ABS. At Rs 82,253 (ex-showroom Delhi), this motorcycle is by far the most affordable cruiser you can put your money on. The next affordable “cruiser,” the Suzuki Intruder, comes in for around Rs 19,000 more! The new Avenger 160 makes sense business-wise because if Bajaj had equipped the Avenger 180 with ABS, its pricing would’ve gone dangerously close to the Avenger 220 ABS. This would also mean Bajaj would lose out in the pricing game - something that’s extremely crucial in a market like ours.

There might be a compromise in displacement in the new Avenger but that’s quite literally only on paper. Out on the road, where it really matters, this motorcycle feels a little more wholesome to ride than the older one. It performs almost as well in every department, and it does all the essential things its target audience care about: Harley-like looks, a smooth engine, comfortable ride quality and reassuring braking prowess. The Avenger Street 160 simply proves that there indeed can be a replacement for displacement!