Weight reduction makes everything better. On paper, the Z650 is quite an improvement then. We bring you the real world results. 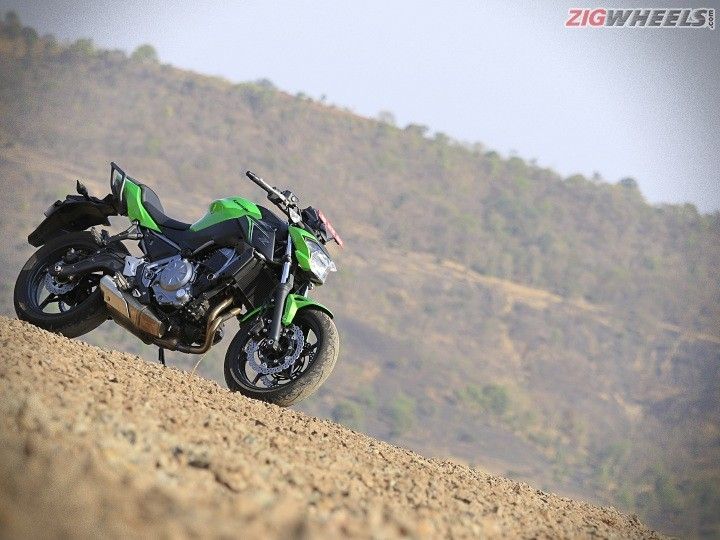 Middleweight nakeds seem to offer a blend of performance and practicality that suits a wide range of bikers in our country. The irony though is that even today there’s not too many options if you wish to buy a middleweight naked. Most manufacturers seem to eye the more expensive, 800cc space with machines that hinge towards aggressive performance rather than a blend of performance, comfort and everyday usability. And that’s why the Kawasaki’s ER-6n was one of our favourite motorcycles in the sub-800cc space.

It was the naked version of the hugely successful Ninja 650 and made great sense with its kind of comfort and performance. It did have a few chinks in its armour though, like the rather bland design, heavy weight and it sure delivered the goods but was far from being an exciting motorcycle to ride. Enter the Z650. The all-new Z has replaced the ageing ER-6n and not only does it look a lot better (it looks so much more aggressive!) but promises to have the same likeable virtues as its predecessor while being more fun to ride. But can it deliver on the aforementioned crucial fronts? We put it through a thorough test to see how it fares.

The Z650 uses Kawasaki's Sugomi design language that has influenced the Z800 and Z1000. In the flesh, the Z650 is surprisingly compact, quite unlike the ER-6n which had a rather bulbous design. The Z is 35mm shorter in length and 15.5mm shorter in height but is 14mm wider. The design is a lot sharper, and streetfighter elements come in the form of a small headlamp and short tail unit, while the mass of the design is concentrated close to the parallel-twin motor. The tail is sharper and shorter and sits higher. The rear seat is smaller while the step up from the rider seat is more pronounced.

The exhaust is an underslung unit that ends just before the rear wheel and is tucked in neatly below the swingarm. The trellis frame looks like a shrunken down version of the H2R’s and is exposed in places. The silver finish contrasts well with the Z650's striking shade of green. There are a lot of details on the bike, like the front fender that gets a vent on both sides and the metal finished swingarm pivot. A lot of design bits are functional like the bungee hooks integrated neatly into the pillion footrests, or the plastic shroud over the rear brake lever that has a cut-out for viewing the rear brake reservoir fluid level. Pillion footpegs are new, and are mounted on the rear frame and that clears a lot of the visual bulk and gives the rear a cleaner appearance.

The instrument console is a good looking, all-digital unit. It is compact, and has a large digital tachometer sitting above the centrally placed speedometer. The digital tachometer is designed to mimic an analogue unit and leaves behind a trail as the revs increase, which looks nice. The instrument cluster also integrates information like tank range and average fuel efficiency. Of course, the shift light and gearshift position indicator are a welcome addition. Warning lights use a bulb setup though, and look dated in what is otherwise a clean design. The headlamp is a simple halogen affair and disappoints with its weak beam spread after-dark, while the tail lamp is now a larger clear lens LED unit.

The Z650 uses the same 649cc liquid-cooled parallel twin motor as the ER-6n though it now meets BS IV emission norms. Power is thus down by 5PS while torque is up by nearly 2Nm. The motor makes 67PS @ 8000rpm and 65.7Nm of torque @ 6500rpm. The engine now uses narrower intake ports which claim to increase the velocity of the air-fuel mixture forced into the combustion chamber, and throttle bodies are smaller while cam openings have been revised too. All these changes give the Z650 a better low to mid-range grunt, and on the road, the bike does feel sprightlier and engaging to ride. That’s also thanks to the reduced weight that the engine has to lug around. Initial throttle response is smoother, and riding in the city is more an easier affair. There’s ample low to mid-range grunt which is a boon in the city and in fact, the improved agility means the Z650 feels almost as nimble to ride as a 150!

Short gearing helps too, and cruising in fourth gear is no problem even at low speeds. The six-speed gearbox is precise but feels a tad notchy, which could be due to the low mileage on our test bike’s odometer. You do need to get used to the adjustable clutch action as the bike tends to stall when disengaging from idle revs, but the clutch feels light otherwise and is easy to modulate on the go. Out on the highway, the Z650 will do 120kmph comfortably sitting in sixth gear at 5500rpm. A prominent buzz crops up between 4000 and 5000rpm and can be felt through the tank, footpegs and handlebars. Opening the throttle will get rid of this though, the bike has no trouble crossing 200kmph.

Wind blast isn't much of an issue till 150kmph, though beyond that you do need to tuck in well. The addition of a slipper clutch makes hurried downshifts a smooth and safe affair. The Z650 is also game for enthusiastic riding, and it is quite easy to provoke the front wheel to lose contact with the tarmac. Get past 5500rpm and there is a renewed vigour that is tempered only subtly when getting near to the 10,000rpm rev limiter.

The new exhaust is compact and has a meatier exhaust note that sounds better as the revs increase. Our VBox tests brought up some interesting numbers as well. The Z650 accelerated to 100kmph from standstill in just 4.48 seconds in our tests, which is quite impressive. The quarter mile was dispatched in 13.32 seconds at 119kmph. What’s more, the bike even impressed with its efficiency. It returned 23.77kmpl in our highway tests and 21.16kmpl in the city test.

One of the major contributors to the Z650's weight loss is the new frame. The ER-6n used a bulky, diamond-type frame, while the Z650 employs a steel trellis unit. The trellis is lighter and stiffer while also being a lot more compact thanks to its construction. The swingarm is a new gull-arm shaped, unit, which looks better, while also helping the weight reduction. The front steering geometry has changed, and the rake is more aggressive rake at 24 degrees, though the wheelbase remains the same as before. The suspension at both ends is fairly basic, with a set of non-adjustable 41mm KYB telescopic front forks performing duty at the front, and horizontally linked rear monoshock damper have been tuned for comfort.

Another big improvement is the new horizontal linking of the rear suspension that makes the bike more stable at speeds, as the linkage allows more suspension travel without affecting the wheel travel. You can opt for a softer setup as which gives the bike a great ride on a variety of surfaces without compromising on stability at speed or in turns.

The bike feels surprisingly compact to sit on, which could be a hindrance for taller riders. Seat height is lowered by 20mm to 785mm. The seat is also narrower at the front which makes it easier for shorter riders to put their feet down. Taller riders should not have an issue either, as knee recess on the fuel tank are accommodating enough. The short handlebars are set forward, and the riding position is more aggressive than the ER-6n's upright ergonomics, it isn’t as aggressive as much as the Z1000. Adjustable clutch and brake levers are a welcome addition.

The ride is well damped over a variety of surfaces and the Z650 does not lose composure over bad roads even at fairly high speeds. The supple ride comes with its drawbacks though. Show it a twisty road with rough patches mid-corner and the bike gets unsettled easily. The steering feels sharp with fairly quick directional changes but it is not quite flickable as some effort is required to get the bike to change direction in corners.

It is engaging though, through a smooth set of corners and easy to lean over. There is also a lot of fork dive under braking and its one of those rare instances when you feel the weight of the bike. Braking is via dual 300mm discs clamped to two-piston Nissin calipers and a single 220mm disc at the rear, and the good news is that the Z650 gets ABS as standard. Front brakes offer good bite while ABS isn’t too intrusive and cuts in later, affording you better brake feel. Our brake tests had the bike cover 31.38 metres to come to a standstill from 80kmph, while it took 17.15 metres to come to a full stop from 60kmph. The Dunlop Sportmax tyres and KYB suspension get the job done for most riding conditions, though you are left with a feeling that the bike could perform a lot better with higher spec suspension and tyres. But then, better cycle parts would add close to a lakh to the price, negating the Z650's value-for-money USP.

Speaking of value for money, the Z650 retails at Rs 5.19 lakh ex-showroom New Delhi, a hike of just 23,000 over the ER-6n. That is fantastic value even if you simply consider the addition of ABS and the slipper clutch, both of which make the bike a lot safer, and more dummy proof. One of the biggest advantages of the ER-6n was that it was a good buy for a wide range of motorcyclists – be it someone upgrading from a single cylinder machine, with its friendliness and easy rideability, or experienced riders who wanted an easy going middleweight as compared to their more potent litre-class machine.

The new Z650 widens that spectrum from both ends. Its compact dimensions, lighter weight, shorter seat height and even more linear power delivery make it more accessible to amateur riders, while experienced riders get to revel in its improved performance and dynamics. The Z650 makes a good step-up for buyers graduating from 250cc single-cylinder bikes and has performance and dynamics good enough to keep them happy for a long time while also being unintimidating enough for them to get quickly used to.