For those who don’t like a MotoGP replica, here’s what else you can buy at the same price point 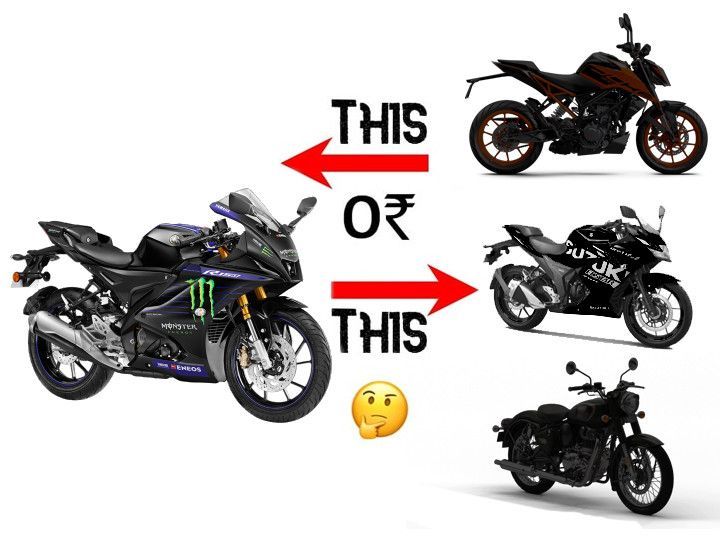 The Yamaha R15 has etched its name in Indian motorcycling history by making the supersport format not only accessible but also fun and usable. Its latest iteration, the R15 V4, hopes to build on the success of its predecessors. For most MotoGP aficionados, a MotoGP replica would be a dream to own, and the latest R15M in its Monster Energy livery looks particularly smashing. However, you can get quite a few other motorcycles, more powerful ones too, for Rs 1.78 lakh (ex-showroom).

Here are our top five picks:

Suzuki Gixxer SF 250: Rs 1.83 lakh
Pure value-for-money and a well-rounded full-faired motorcycle -- that’s how you can describe the Suzuki Gixxer SF 250. It also has a MotoGP edition, but the advantage here is that it has 100 cee cees and close to 8.5PS more than the R15. However, unlike the R15, this one isn’t a heartthrob, lacking the emotional connect. Plus, the kit on offer is relatively simple too.

KTM 200 Duke: Rs 1.85 lakh
The most prolific KTM bike in India, the 200 Duke holds a special place in the hearts of many young sport bike buyers. The performance remains as explosive as it was in BS4 times, but now, with the charm and comfort of the larger Duke siblings, like the 250 Duke and 390 Duke. At Rs 1.85 lakh, it is no longer a bargain but of all the bikes in the Austrian bikemaker’s portfolio, the 200 Duke seems to be the most reasonably priced one.

RE Classic 350: Rs 1.84 lakh onwards
If you prefer classics over sportiness, then the Royal Enfield Classic 350 should be the one that would appeal to you the most. In its latest avatar, the Classic 350 has become a polished retro bike with no harsh vibes and brilliant ride dynamics. There are some lingering vibrations engineered to keep the nostalgic feeling intact, though. While the entry-level variant of the Classic 350 is nearly on par with the R15M MotoGP, the dual-channel ABS versions cost a bit more.

Jawa: Rs 1.78 lakh onwards
Just like the Classic 350, the single-channel ABS variant of the Jawa too matches the R15M MotoGP. Unlike the Classic, it has a modern liquid-cooled free-revving heart tucked underneath the retro garb. With the 2021 updates, the Jawa has become a bit more versatile, the biggest update being the cross-port exhaust technology allowing the Jawa engineers to extract a bit more performance and a lot more tractability from the short stroke motor.