The top variant of Hero MotoCorp’s premium 125cc offering gets some more bells and whistles. Is that enough to slug it out with its class rivals? 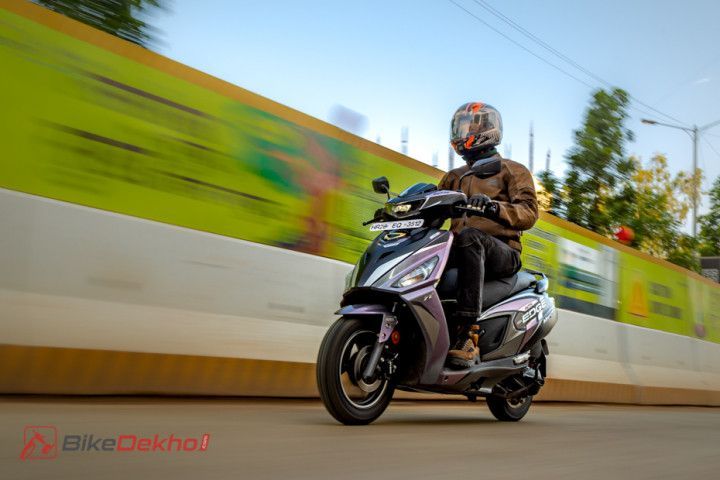 The Hero Maestro has come a long way, literally, from 2012. It has gained a larger engine and underpinnings, and in this latest top-spec version gets a host of features which have been lifted right off the XPulse 200.

But considering the fact its features aren’t really pioneering, can it make a dent in the sales figures of its established, equally feature-packed, though costlier rivals?

When viewed in profile, the Maestro Edge 125 looks near-identical to its BS6 variant, save for the refreshed stickering. Besides, our test vehicle came in the new ‘Prismatic’ colour scheme, with the purple colour seemingly changing hue when viewed from different angles.

The big change, aesthetically, can be seen at the first glance of the front, as the Maestro Edge 125 now gets a sleek new LED headlight instead of the predecessor’s halogen unit, though we would have liked for the LED headlight to be a bit brighter. Besides, the front apron also gets a triangular LED DRL.

From the seat, you are in a commanding position, with the handlebars adequately wide and high so as not to mess with your knees. The seat isn’t particularly roomy, and will definitely feel short on space if you’re over six feet tall. This feeling will continue on to the floorboard as well, as taller riders (or even those with bigger shoe sizes) won’t get much space even with a medium-sized bag on the floorboard. Besides, the seat not only feels a bit short on space (especially when riding with a pillion) but is also unnecessarily soft.

The performance on tap is, in a word, adequate. You get 9.1PS and 10.4Nm from its fuel-injected 124.6cc engine. You might feel a shortage of grunt at low speeds, especially with a pillion in tow. In fact, even when riding solo, the performance still feels a step behind that of its rivals, such as the Suzuki Access 125 or the Honda Activa 125.

However, this doesn’t mean you’ll need to needlessly wring the throttle or ‘plan’ your overtakes, as once you’re in the midrange, you’ll find that this is where the Maestro 125 feels the most comfortable. Here, it seems to react to throttle inputs just a bit better while giving an overall vibe-free riding experience, with that thrummy exhaust note to boot.

One more facet where Hero has definitely improved is the way the i3S system has been calibrated. We had previously experienced the i3S system on the Destini, and there it felt inconsistent, at best. No cause for concern here, though, as the system worked without a hitch this time around, cutting the ignition whenever we were at a standstill for about 4-5 seconds, and then starting the engine back up with the smallest hint of the throttle (with any one of the brakes pressed) without missing a beat.

Another aspect of the Maestro Edge 125’s engine that bears mentioning is its fuel efficiency. During our tests we were able to extract a city efficiency figure of 65kmpl, which is not only a significant improvement over the Destini 125 (which shares the same engine), but also just 4kmpl off from the segment leader, the Yamaha Fascino 125 Hybrid.

Despite the 12-inch front and 10-inch rear tyre setup, the Maestro Edge 125 is a sprightly handler. The relatively light 112kg kerb weight (111kg for the drum brake variant) and reasonable midrange push from the engine means weaving your way through traffic is quite easy.

However, there are quite a few chinks in its armour. The ride quality, though plush enough to handle most undulations, is never really composed, and needs the added weight of a pillion to iron out the particularly large ones. A flip side to this, however, is that with two hefty occupants on board, the shocks seemed to run out of travel a bit earlier than expected. Hence, though there is no apparent lack in handling when ferrying generously proportioned occupants, sharp bumps, such as manhole covers or outcrops on the side of the road, register more of an impact than expected.

Another peculiarity is the overly soft saddle, which causes the rider to sink in, making even an hour in the saddle enough to leave you with numbness in your rear/tailbone.

The Maestro Edge 125 gets a 190mm disc or a 130mm drum up front, and a 130mm drum at the rear, with CBS as standard. And though the brakes have a good amount of bite and competent progression, they markedly lack feel.

Hence, any increase in speed is accompanied by the feeling of constantly being on edge, of whether you’ll be able to stop in time to avoid that random pothole or errant person / dog / car / truck / space shuttle bobbing and weaving along our jam-packed roads.

Frankly speaking, the Maestro Edge 125 can’t really be classified as a mechanical marvel. You get a conventional telescopic front and single rear shock; the inclusion of alloy wheels means you get tubeless tyres; and the twin LED headlights, though a welcome addition, could have done with a bit more brightness.

However, the story changes when you consider the sheer plethora of sensors onboard that allow you to monitor every single facet of the vehicle. Pair your mobile to your vehicle via the Hero Connect app, and telematics ensure you get a tow away alert (in case of sudden movement for a parked vehicle), geofence alert (when the vehicle leaves a predetermined radius), vehicle start alert (notifies you when anyone tries to switch on the ignition using anything other than the key individually paired with each scooter), speed alert and a last-parked location. There is also the provision for a topple alert, and trip analysis (which covers parameters like distance travelled, time taken, average fuel efficiency) which calculates your driving score.

But that’s not all. Hero’s ace in the hole for this range-topping variant of the Maestro Edge 125 is the inclusion of turn-by-turn navigation (via the Hero Ride Guide app), which can be had on the easy to read all-digital cluster (which quite closely resembles the cluster from the XPulse 200). Besides, you also get calls and message alerts, so all your rides are now sorted!

Priced between Rs 72,030 for the base, drum brake and non bluetooth-equipped variant, and Rs 79,750 for the range-topping disc brake and navigation-ready variant, the Maestro Edge 125 is easy on the pocket, if not anything else.

The Maestro is competent in a fair breadth of abilities. However, it does not really have the ‘Edge’ (pun intended) in any one field. That said, it does look a bit better than your average daily runabout. It can hold its own in city traffic without making you worry too much about fuel bills, offers a gamut of features that’ll keep even the most overprotective of parents happy and, last but not least, offers Hero’s trademark affordable cost of ownership.