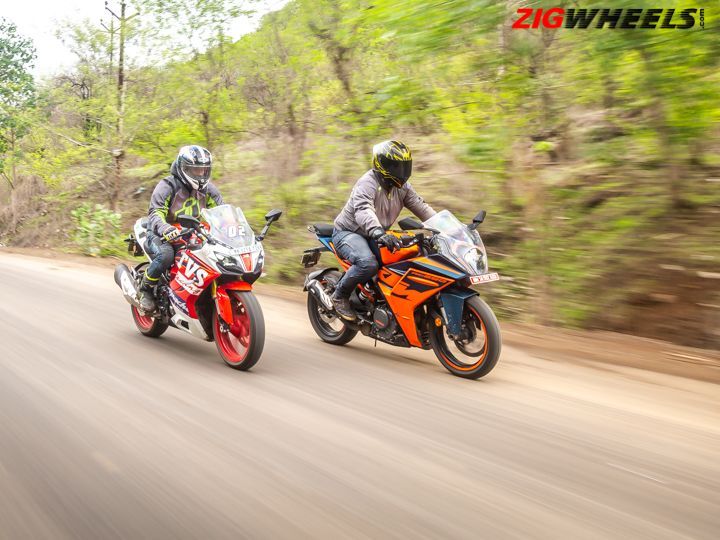 Some of you may not be sold on the looks of the 2022 KTM RC 390. Yes, it isn’t as sharp as the previous-gen model, but it tends to grow on you. Besides, it’s what’s under the skin that counts, isn’t it?

Both the RC 390 and the TVS Apache RR 310 have grown tenfold since their inception. The performance isn't the only thing on offer; there's a lot more equipment and tech. They are also the closest rivals so it’s only fair to put them against each other in a full-blown real-world performance match-up.

The RC 390’s larger motor belts out 43.5PS and 37Nm – 9.5PS and 10Nm more than its arch rival. It’s also 2kg lighter than the RR 310, which gives it a much better power-to-weight ratio. But though the performance gap is pretty substantial, the actual acceleration figures aren’t.

The difference isn’t much initially, with just 0.25 seconds separating the two till 60kmph. However, the RC 390’s better drive helps it shave crucial seconds as the speeds climb, consequently opening up the gap to 0.82 seconds at 100kmph.

Compared to the RR 310, the RC feels a lot more exhilarating. It’s not only quicker but a lot smoother and sharper in terms of throttle response. Moreover, the weird face offers better aerodynamic efficiency as well.

The RC’s even spread of torque across the rev range helps it surge ahead the moment you twist the throttle. The Apache, on the other hand, makes you work a bit, and you’ll need to drop a gear to get past moving traffic.

The RC has the best braking setup in its segment, featuring 320mm and 230mm discs at the front and rear, respectively. The lighter rotors also have a knock-on effect on the bike's braking distance. It comes to a dead stop two metres before the RR 310, a huge difference in the real world.

If you're easier on the throttle, the RR’s frugalness will appeal more to you. It's almost 6kmpl more fuel efficient than the KTM. But the RC 390’s larger fuel tank will keep you on the road a bit longer.

At Rs 3.13 lakh (ex-showroom Delhi), the KTM RC 390 commands a premium of almost Rs 50,000 over the TVS Apache RR 310, priced at Rs 2.65 lakh. And while team orange is the clear winner here purely in terms of performance, the RR 310 still has a lot going for it. It offers better tyres, an adjustable front suspension, and loads of connectivity features, all at an attractive price. Nevertheless, the KTM feels more well-rounded and versatile.