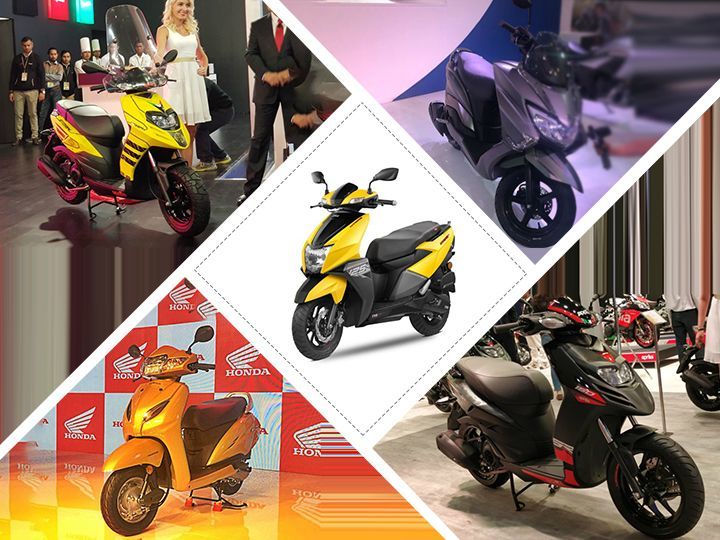 The Auto Expo 2018 was packed with new launches, unveils and interesting showcases, of which, the majority was comprised of scooters. Before you hit the Expo this weekend, we bring you a list of the top five scooters at the Auto Expo 2018.

The Aprilia SR 150 is certainly one of the sportiest scooters in India today, but it is also priced towards the premium end of the spectrum at Rs 70,939 (ex-showroom, Pune). In order to grab hold of a larger audience, Aprilia launched the SR 125 at Rs 65,310 (ex-showroom, Pune) and unveiled the Storm 125. In terms of styling, both the scooters looks similar to the Aprilia SR 150.

But the key difference between the Storm 125 from the SR 125 is the wheel size. The Storm 125 sports 12-inch wheels instead of the 14-inch ones seen on the SR range. That said, these are the fattest tyres seen on a scooter, with the front being a 120/80 section rubber, while the rear gets a 130/80 section tyre. Other difference includes bright colours and funky new graphics. It will also come with different optional accessories such as a large windscreen.

Suspension duties are carried out by telescopic front forks and an adjustable rear monoshock. As is the case with SR branded scooters, the Storm also gets a disc brake up front, with a drum brake at the rear. Once launched, we expect the Storm 125 to be priced at approximately Rs 67,000 (ex-showroom).

Honda unveiled a total of 11 models at the Auto Expo 2018, one of which was the new generation Activa 5G. The scooter has received a few subtle updates for the new year. Honda also introduced an additional variant of the scooter, known as the 'Deluxe' variant wherein, along with the standard features you also get a semi-digital instrument console which shows ECO options and service due indicator.

The standard features include an all-LED headlamp - a feature that was first introduced by the Honda Grazia in the segment -, chrome inserts on the front apron and two new colour options - Metallic Yellow and Red. Other than that, the scooter remains unchanged.

It is still powered by the old 109cc, single-cylinder, air-cooled engine, which produces 8PS of power at 7,500rpm and 9Nm of torque at 5,500rpm. With the few modern touches, the Activa 5G certainly adds a dash of freshness over the Activa 4G that it replaces. Prices aren’t announced yet, but we expect the new model to be available at a price hike of around Rs 1500 over the Activa 4G that costs Rs 51,460 (ex-showroom, Delhi).

Suzuki also made its presence felt at the Auto Expo 2018 by unveiling the Suzuki Burgman Street. In terms of design, it sports a maxi-scooter inspired look with its large windscreen and split LED headlamp placed within the front apron, on top of the mudguard. The fully-digital instrument console sits right in between the handlebar and the windscreen. There is a multi-function key slot, generous underseat storage and a 12V charging socket as well. The rider seat section is slightly tapered down, whereas the pillion seat looks broad. At the rear, it sports a single-piece grab rail and a single-piece cluster consisting of an LEDtaillight and side indicators.

With the Burgman range available internationally, Suzuki has always focused on comfort. So expect the Burgman Street to offer the same in India. To the same effect, the Burgman Street features telescopic forks up front and a monoshock at the back. The 90/90-12 front tyre gets a disc brake, while the 90/100-10 rear wheel is bolted with a drum brake.

Suzuki is expected to launch the Burgman Street soon. Expect it to be approximately Rs 7,000 costlier than the Suzuki Access 125.

The Aprilia SR 150 has been updated for 2018. These updates include new livery for the 'Race' variant, new colours including a Carbon Se edition for the standard model and a semi-digital instrument console. Other than these changes, the scooter remains unchanged mechanically and cosmetically.

Just a day before the Auto Expo 2018, TVS launched its first ever 125cc scooter - the NTorq 125 - at a price of Rs 58,750 (ex-showroom Delhi). The scooter is edgy and has been designed to look sporty to attract many young buyers. It certainly has taken a lot of inspiration from the Graphite concept that was showcased at the Auto Expo 2016. The NTorq 125 is also the first Indian scooter to get Bluetooth connectivity. Its fully digital instrument console hosts a total of 55 features including navigation assist, a lap timer, engine oil temperature, top speed recorder, last park location assist and a service reminder to name a few.

Suspension duties here are handled by telescopic forks up front, while the rear houses twin gas-charged shock absorbers. Braking is done via a front 220mm disc and a rear 130mm drum brake.