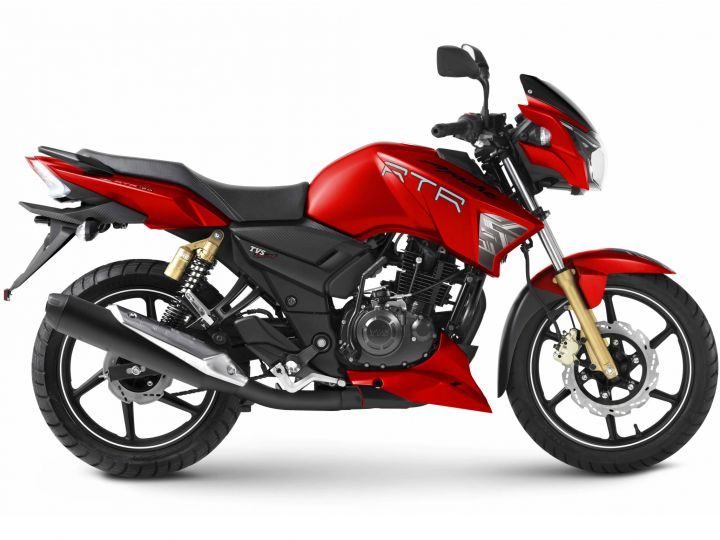 The Apache RTR 180 and its little sibling the RTR 160, TVS’ performance-oriented bikes, have been updated with a new colour. The new matte red paint scheme which is already available for the company’s flagship bike, the Apache RTR 200 4V, is now also available with the rest of the RTR series at a premium of Rs 1,000 over existing variants.

The cosmetic enhancement seems similar to the matte blue edition that came out last year and is mostly to encash on the festive demand. The bikes do look fresh and premium in the matte red colour scheme though. In addition to the new shade, the bike gets new decals as well.

The RTR 180 has a 177.4cc air-cooled single-cylinder engine with a 5-speed gearbox. It puts out 17.02PS of power at 8500rpm and 15.5Nm of torque at 6500rpm. On the suspension front, it gets conventional front forks and twin gas-charged shock absorbers at the rear. Braking is handled by a single petal disc brake at the front and rear. The RTR 180 is also available with an ABS variant with rear lift prevention. It is also the only bike priced under Rs 1 lakh to get a dual-channel ABS.

For suspension duties, the RTR 160 has conventional forks upfront and twin gas-charged shock absorbers at the rear. A petal disc brake at the front and a drum brake at the rear help the RTR 160 shed speed. There is also an option of a rear disc brake.
Considering that the new matte red edition comes for a premium of just Rs 1,000, it isn't a bad deal at all for a good looking bike.
Recommended Read:
- Smaller TVS Apache RTR Spotted
- Conquering The Himalayas With The TVS Zest Girls