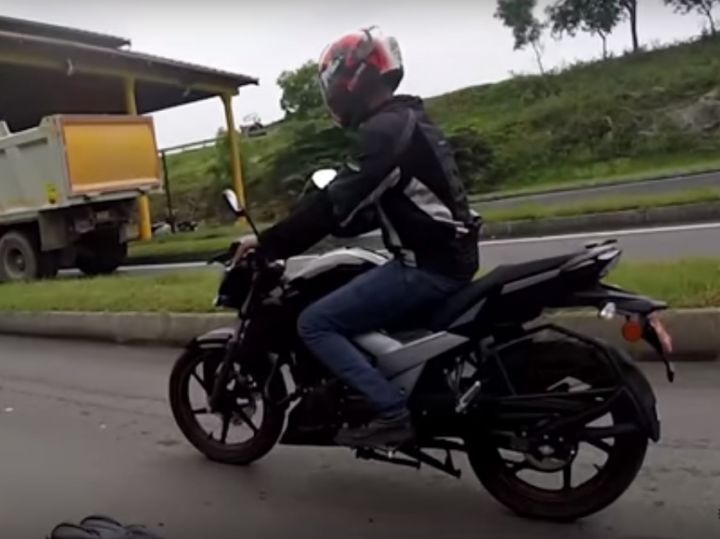 The 160cc segment has been a burgeoning one with major players like Honda, Yamaha and Suzuki sharing a piece of the pie. Even Bajaj has launched a smaller NS160 to be able to grab a piece of this growing segment. It seems like TVS has taken notice and are in the process of creating their own segment rival. A recently spotted uncamouflaged test mule, which looked like a smaller RTR 200 could very well be the new Apache RTR 160 as the update for the same was long overdue. In a video posted online, spy pics indicate an overall design flow similar to the Apache RTR 200. The tank, side panels tail piece and rear LED tail lamp is similar to the RTR 200 though the side panel might get a contrasting silver paint job.

A closer look reveals a rear drum brake at the rear. The current RTR 160 gets a rear disc so it is possible that the new bike will get it as an option. The test bike does not have a split seat like the RTR 200 thought it gets the latter's monoshock suspension suspension at the rear. The wheels seem smaller in profile compared to the RTR 200. It gets six-spoke alloys as opposed to the ten-spoke alloys on the RTR 200. Now, the engine block looks smaller than the 200 so it is possible that the RTR 160's old motor has been revised to up the performance. The engine looks like it is air-cooled and TVS might stick with the carburettor setup to keep costs in check. There is a kickstart option and the exhaust looks carried over from the RTR 200.