Could the Royal Enfield Scram be based on the Interceptor 650? 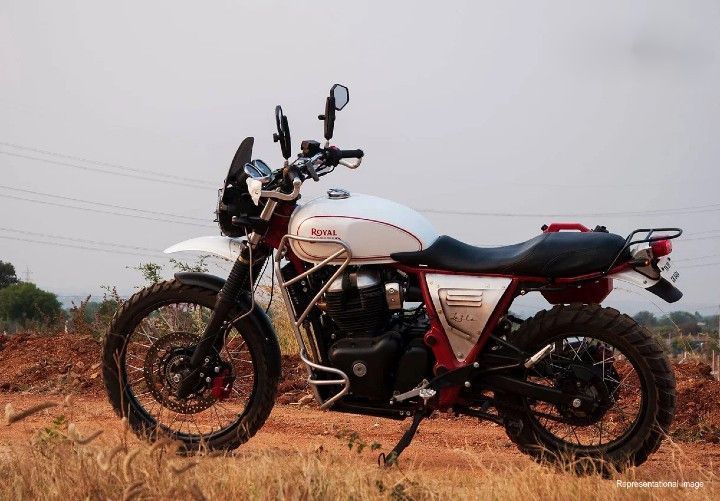 Royal Enfield may soon birth a new motorcycle from its successful 650 platform. The bike maker has recently filed a patent for a new bike called the Scram. After a retro roadster (Interceptor 650), a cafe racer (Continental GT 650), and a cruiser (Shotgun?), the next logical (and should we say very British) move would be to add a Scrambler to the lineup.

Will It Be A Hardcore Off-roader?

The Royal Enfield Scram is likely to be along the lines of the Triumph Street Scrambler 900. So, expect wire-spoke rims (possibly 19/17-inch) shod with dual-purpose rubber and long-travel suspension. RE may opt to add bits like serrated footpegs, scrambler-style high-mounted exhausts, and fenders. Though the Scram may not be an all-out mud-slinging off-roader, it could be a versatile machine for road and trail-riding.

Does The Indian Market Really Need A 650cc Scrambler?

Scramblers are purpose-built off-road motorcycles not meant for everybody. At the moment, our ticket to this genre is the Triumph Street Scrambler 900, which will set you back by Rs 9.65 lakh. For a bike primarily designed to ply off the beaten path, that’s asking for a lot. The Royal Enfield Scram 650 is likely to cost a third of the Triumph, which should be able to take this genre to a broader audience just like the Madras company did with its 650 Twins.

In fact, custom garages around the world, including the Hyderabad-based EIMOR Customs, have already flirted with the idea of an Interceptor 650-based Scrambler. The 649cc air-cooled parallel-twin engine has a healthy dose of its 52Nm torque available at lower revs, just as one would expect from a Scrambler. With 47PS on tap, highway runs wouldn’t feel boring as well.

Even though Scramblers may not be a popular format in India, European markets have a steady demand for such bikes. CCM Motorcycles, BMW Motorrad, Ducati, heck even Yamaha -- every brand has a scrambler in its portfolio.

While the RE Scram 650 may not be a super-seller in India, the bike could certainly rattle and shake up markets overseas.

Could the Scram Be Just A Brawnier Hunter 350?

We don’t rule out the possibility of the Royal Enfield being based on the upcoming Hunter 350. We have seen Triumph pull off something similar with the Street Twin and Street Scrambler, and RE could well replicate that. The 349cc single-cylinder engine on the Meteor 350 is more refined than the UCE motor, with most of its torque available from as low as 2,000rpm. We tested the Meteor 350 and were impressed by the new engine, so a scrambler with the same unit doesn’t seem like a bad idea at all.