Does an injection of modernity improve the already quite likeable Honda H’ness? 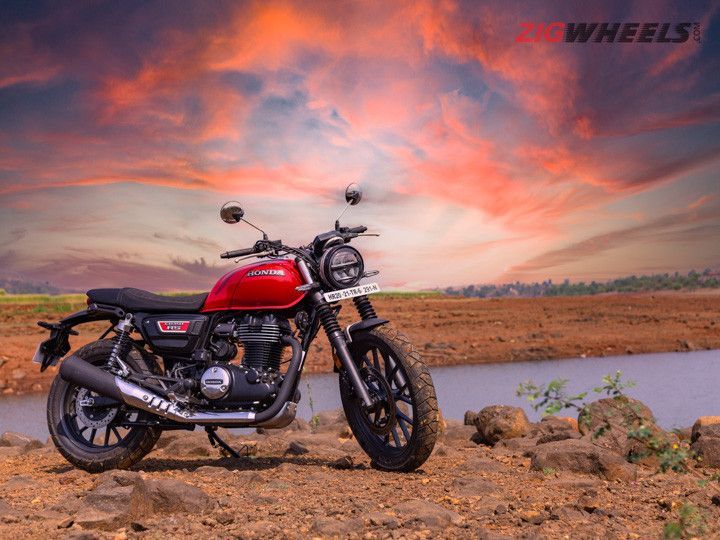 The great thing about launching a capable new bike is that you can then use that platform to try and spawn more capable new bikes. Royal Enfield has a number of prolific models all based on the same 346cc UCE platform, Honda’s 500cc twin-cylinder motor powers everything from a sportsbike to a cruiser to an ADV and more, and now Honda has used the foundations of its H’ness CB350 to create the more youthful and more modern CB350RS. We’ve had the chance to swing a leg over this bike, so we’re going to tell you what Honda has done differently, what difference these changes make to the rider, and who this bike is for.

Honda has done a good job of giving the CB350RS a unique identity, at least visually. The replacement of chrome with blacked-out bits and the sleeker tail section go a long way in making the RS look considerably more sporty and modern than the H’ness. To go with that, Honda has also tweaked the riding position, dropping the bars and raising the pegs to put you in a slightly more intentful and leaned-forward position. In keeping with the more current theme, the old-school heel-and-toe shifter has lost its heel section, and there’s a new ‘tuck and roll’ seat on the CB350RS.

The next bit is where it gets confusing. All the changes so far have pushed the RS into a slightly sporty, kinda cafe racer-ey zone. But then Honda has slashed the fenders, slapped on a bash plate and fork gaiters, and thrown in slightly off-road oriented tyres. These changes steer the bike in the scrambler direction, leaving us a bit confused about the CB350RS’ identity. There are also no mechanical updates to back up the visual differences, so you get the same 348cc single-cylinder motor churning out 21PS and 30Nm, housed in the same duplex cradle frame. As a result of a smaller rear wheel (17-incher vs 18 on the H’ness) and the more minimalist bodywork, the CB350RS is a couple of kilos lighter than the H’ness, and has 2mm more ground clearance. Wheel size is down but tyre width is up at the rear, from 130mm to 150mm. The most surprising changes on this bike, though, are the omission of Bluetooth connectivity and mobile phone charging, both of which are standard features on the DLX Pro variant of the H’ness. Although Honda does offer a USB-C charger as an optional accessory for the RS.

Many of the changes to the CB350RS seem to follow a theme. Less chrome bits should make this bike cheaper for Honda to manufacture. The omission of Bluetooth and charging capabilities should also help Honda shave off some bucks from its side. The smaller, more conventional rear wheel size, smaller fenders and smaller gear shifter should be cheaper too. So it’s reasonable to expect the CB350RS to be a little more affordable than the H’ness. But Honda thinks otherwise, because starting at Rs 1,96,000, the RS is actually Rs 9,500 more expensive than the H’ness in its similarly-equipped DLX variant.

Taking a ride on the bike actually does more to highlight the similarities than the differences. The most notable similarity is the familiar powertrain. While its laidback power delivery felt natural on the easygoing H’ness, the motor now feels a touch lethargic from the sportier saddle of the CB350RS. The flat spot at the bottom of the rev range feels all the more pronounced on this genre of bike, and you need to work the gearbox hard if you want to make swift progress. Also feeling out of place and adding to the problem are the tall transmission ratios -- something as simple as sprocketing changes would’ve gone a long way in making the CB350RS feel like a livelier motorcycle, and we’re disappointed to see the lack of mechanical changes from Honda.

One thing we’re glad to see carried over is the excellent ride quality -- the RS flattens out bumps superbly and remains quite composed at most times. With the sportier appearance and aspirations, you’d expect this bike to be a sharper handler than the H’ness. Well, Honda says that the RS in its name stands for road sailing, and sailing sounds about right, because the chunkier rear tyre has made the CB350RS feel heavier steering than its more old-school sibling. Oh, and don’t be fooled by Honda’s claims about a ‘lower rear stance’ either. Because though the rear wheel is smaller, taller tyre sidewalls mean that the rear tyre rolling diameter on the RS is actually a couple of millimeters more than the H’ness’.

The other noticeable difference is the riding posture. You do have to lean forward a bit to reach the bars, and the lower body is a bit more cramped than on the H’ness. While this certainly isn’t an uncomfortable position, it does mean that you will be tired out that little bit earlier when you go for longer stints out on the highway. The real bummer is that the more spirited riding posture isn’t bringing any real gains -- the high speed front-end lightness of the H’ness still seems to be present even on the RS.

Having ridden the bike, it seems like the only reason for you to buy this over the H’ness is if you’re a big fan of the way it looks. Because in terms of riding experience, you can get yourself a very similar, perhaps even slightly better motorcycle, for less money. And it’ll be better equipped too. Overall, the CB350RS seems like a bit of a missed opportunity from Honda. It could have used the capable foundations of the H’ness to create a more unique motorcycle with a more well-defined identity that would’ve appealed to an entirely new and different audience. Instead, it’s taken this middle-of-the-road approach and created a halfway house that we find hard to recommend to anyone except museum curators.