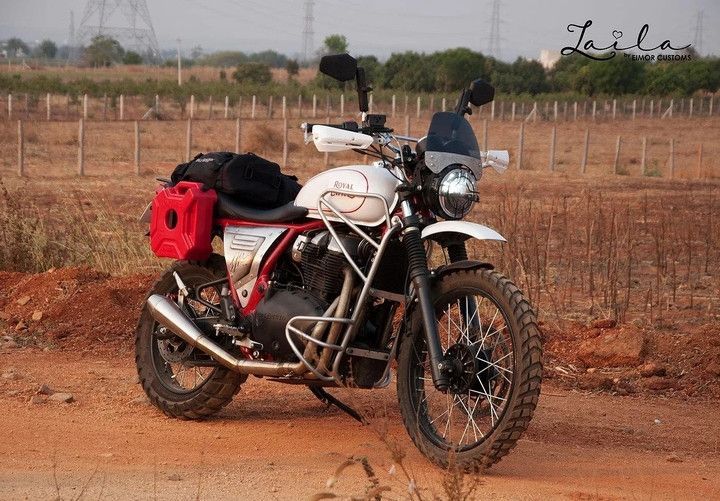 Royal Enfield has always been an excellent canvas for custom houses. The latest job is an Interceptor 650 customised by EIMOR Customs, now christened Laila. Before you start to draw similarities between this bike’s colour and the Ducati Scrambler Desert Sled, there’s a lot going on under the skin.

EIMOR has left no stone unturned to transform the retro roadster into a trail-happy scrambler. To make it suitable for venturing beyond the beaten path, this bike comes with the front assembly from a Royal Enfield Himalayan. To top that off, the internals of the telescopic fork have been upgraded with the YSS kit offered for the ADV. Even the twin shocks at the rear have been replaced by a YSS monoshock developed for the Himalayan, which means a fair amount of effort has been put into making new mounts and altering the chassis for the new suspension setup. The updated suspension setup will result in more travel which will be beneficial while riding off-road.

This Royal Enfield Interceptor has been stripped of all the chrome. Everything -- from the serrated footpegs and the doubletake adventure mirrors to the 21/17-inch wheel setup and high-slung exhaust -- screams off-road.

Given its intent, Laila comes with decent crash protection. The bike gets heavy-duty handguards, a massive engine guard extending all the way up to the tank, and a stealthy bash plate. Apart from making this bike more purposeful, the builders managed to shave 14kg off.

EIMOR Customs hasn’t tinkered with the 649cc parallel-twin engine producing 47PS and 52Nm. The bike already has ample low-end grunt, and with all the extra flab shaved off, this one would be quite an exciting ride on the dirt.

Until Royal Enfield brings out an ADV based on the 650cc platform, EIMOR Customs’ Laila is your only bet. Though the pricing details aren’t available, it would be fair to say it wouldn’t really come cheap. And while the 650cc adventure bike seems like a distant reality, Royal Enfield’s 650cc cruisers are almost ready to hit the streets.