And it’s more affordable than the Kawasaki Z H2! 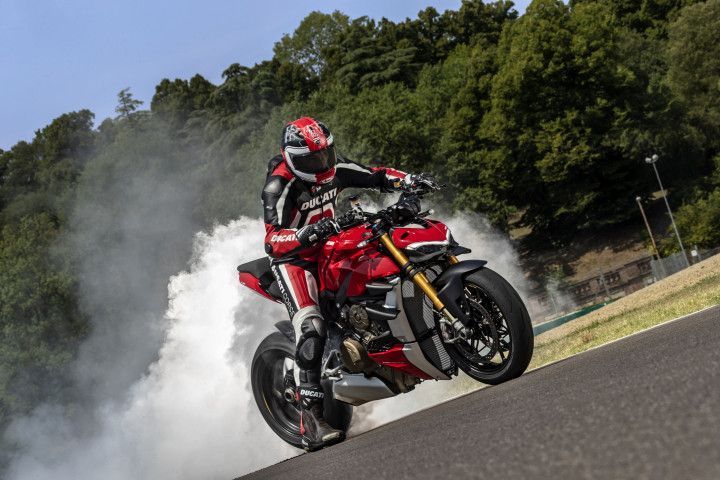 All the teasing has finally come to an end with Bologna’s super naked finally landing up on our shores. The Ducati Streetfighter V4 has arrived at a highly tempting price of Rs 19.99 lakh (ex-showroom India). Why is it so tempting? Let’s find out.

What’s The Price? Who Are Its Rivals?
At Rs 19.99 lakh, the Ducati Streetfighter V4 undercuts the Kawasaki Z H2 by over Rs 3 lakh. In fact, the higher-spec Streetfighter V4 S costs the same as the base version of the Z H2 and it’s Rs 3 lakh more affordable than the SE.

The Streetfighter costs around Rs 3 lakh more than the Triumph Speed Triple 1200 RS. The big British naked packs near about the same level of equipment as the standard variant of the Italian bike but it’s down on power by a crucial 28PS.

How Many Variants Are There?
The Streetfighter V4 comes in two variants: standard and S. Both versions are offered in the standard Ducati Red colour but you could pay Rs 20,000 more and opt for the Dark Stealth scheme on the V4 S.

What’s New?
The Streetfighter V4 has been the Italian firm’s flagship naked motorcycle for the past couple of years. It couldn’t arrive in India sooner as it was launched initially as a EU4 model and the necessary emission updates only arrived late last year. Still, better late than never, right?

Calling the Streetfighter V4 a Panigale V4 sans fairing would do the naked a great deal of disservice. While the majority of the parts are shared between the two, the difference in ergonomics and bodywork lends the naked a striking and fearsome vibe. But we still think the face looks a bit Japanese, rather than Italian.

The 1,103cc Desmosedici Stradale V4 engine puts out 208PS and 123Nm, which are earth-shattering figures for a naked motorcycle. It is one of the only three naked motorcycles to be a part of the elite 200PS+ club and it’s certainly one of the most technologically advanced of the lot.

Here are some must-read articles if you want to know more about the Streetfighter V4:

ZigSays
The Ducati Streetfighter V4 is one of the most powerful and mental nakeds in the world. It looks equally deadly, especially in the Dark Stealth option. The phenomenal pricing is just the cherry on the cake. The only question that remains is: are you brave enough to take a bite of this spicy Italian number?