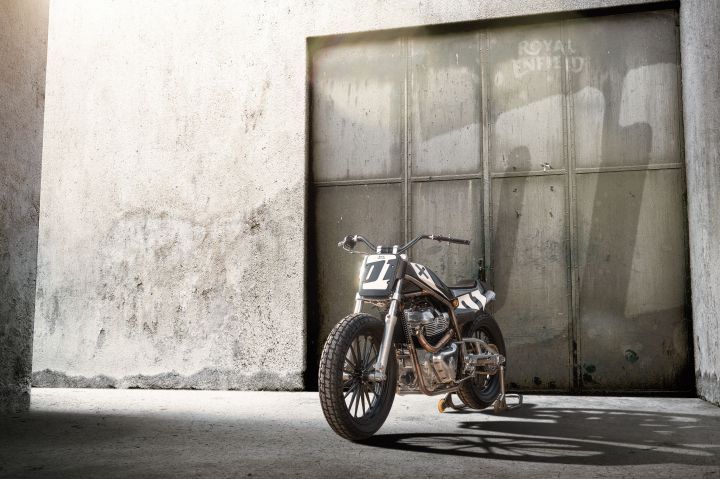 The Indian contingent at EICMA 2019 was made up of Hero MotoCorp and Royal Enfield. While the former showed off an interesting Xtreme concept, the latter’s stall was populated by some interesting custom bikes. We’re going to give you a lowdown on everything Royal Enfield related at the show:

The Chennai manufacturer’s small-capacity adventure tourer was shown in three new colour schemes at EICMA 2019. The first two are snazzy dual-tone designs while the third is a matte grey look. RE also displayed a Himalayan kitted out with some optional accessories, including new hand guards.

The bike itself remains mechanically unchanged but the 411cc single-cylinder engine on the Himalayan will have to be updated before April next year to comply with BS6 emission norms. This is when we expect these new colour schemes to be launched officially.

While RE hasn’t made any changes to the production version of the Himalayan, it did showcase the very rugged-looking custom Himalayan MJR Roach, previously seen at the Bike Shed London 2019. Thanks to its lengthened single-sided swingarm and knobby tyres, this bike looks like a mean hillclimb monster. It might be called the Roach but its four-pod projector headlight setup makes it look more like a spider. It also gets an alloy wheel at the rear and an upside-down front fork. But its party piece is in the form of a turbocharger sourced from Garrett, which should give it more than enough grunt to conquer whatever hill it decides to climb.

The 650 Goes Down The Flat Track Route

One of the highlights of the stall was the Interceptor 650 Twins FT custom, shown for the first time at EICMA 2019. This bike has been breathed upon by Harris Performance, RE’s technological partner, and the results are plain to see. The chassis wizard has created a bespoke double cradle frame, swingarm and front fork for the flat-tracker. Alloy wheels have been thrown in and no, you’re not hallucinating, there really is no front brake. Believe it or not, this is the norm on flat-trackers. The motorcycle has a very slim profile, as is required in this genre, with a narrow, tall and flat seat. Engine performance has been bumped up with an underseat free-flowing exhaust system and big-bore kit that takes displacement up to 750cc, both from S&S.

This quirky model made its first EICMA appearance this year, with the 500cc version on display at RE’s stall. This bike looks intentful with its dual-purpose tyres, rear luggage rack and upswept exhaust pipe. The brightly painted frame and unique badging give the bike a distinct identity. Royal Enfield’s 650 models and Bullet 500 were also showcased at the brand’s stall.