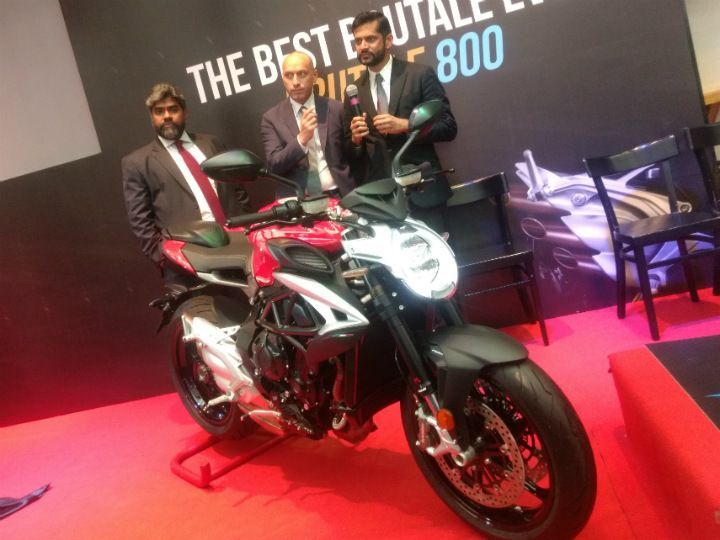 MV Agusta has launched the new Brutale 800 in India today, priced at Rs 15.59 lakh, ex-showroom, India. This is the post-GST price for the bike and is the same throughout the country. The new motorcycle is the second 800cc motorcycle from the Italian bikemaker for our two-wheeler market after the MV Agusta F3. The MV Agusta Brutale 800 was first unveiled at the 2015 EICMA motorcycle show but its Indian launch has been delayed till date due to homologation issues. Motoroyale, the official importer for the Italian brand in India, have decided to assemble the bike in Ahmednagar, Maharashtra. Bookings for the bike are open and so far 9 units have been booked.

The Brutale 800 is a gorgeous motorcycle with its beautiful mix of curves and sharp edges that screams Italian exotica from whatever angle you view it. The basic design of the new bike is similar to the older Brutale 800, with the new floating tail section being the most evident visual distinction. The oval headlight has been carried forward but it now features LED DRLs and the iconic triple exhaust mufflers have been retained but are a bit larger than before. The instrument cluster is an all-digital unit which has been redesigned and the switch gear is also new.

Powering the bike is a new Euro 4-compliant 798cc motor. The triple-cylinder engine produces 110PS at 11,500rpm and a peak torque of 83Nm at 7600rpm. In comparison to the older engine, power figure is down by a massive 17PS, while torque has risen by 2Nm. The engine is mated to a 6-speed gearbox with slipper clutch and the new bike also gets bidirectional quickshifter (segment-first).

The bike employs a tubular trellis frame that has been suspended on fully adjustable Marzocchi USD forks at front and Sachs monoshock unit at the back. Braking is done by double floating 320mm dia disc brakes at front while a 220mm dia disc unit does duty at rear. The MV Agusta Brutale 800 tips the scales at 175kg (dry weight) and fuel tank capacity is 16.5 litres.