The exotic Italian manufacturer steps into the middleweight naked space with the new generation Brutale 800. What’s it like to ride? 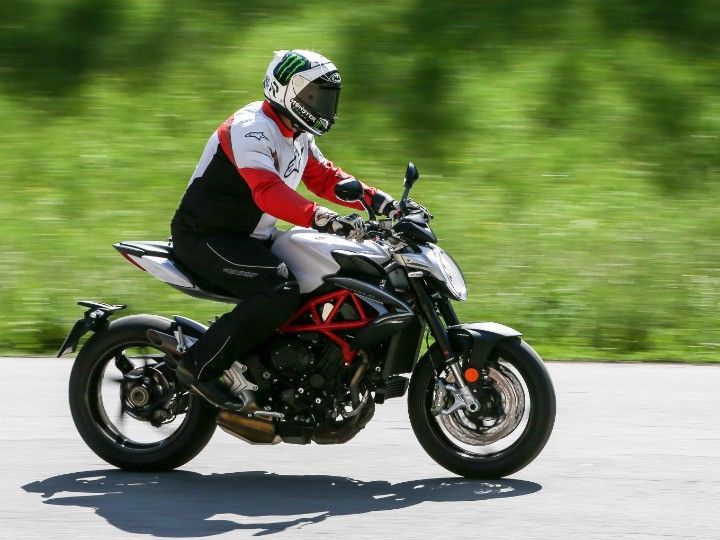 It’s almost two years now since MV Agusta entered the burgeoning premium two-wheeler space in India with Motoroyale, Pune-based Kinetic Group’s new two-wheeler venture. The iconic Italian brand’s presence in India, though, was limited to the full-blooded litre-class segments, and it is only a few months ago that Motoroyale launched the F3 800 to enter the nascent middleweight supersport space in the country.

But, a fully faired motorcycle is hardly the most ideal for our clogged roads and racetrack-starved country. A motorcycle better suited for daily use would be naked. They tend to be less aggressive not just in terms of seating position, but engine character as well.  And MV Agusta is now ready to enter this important segment with its Brutale 800. Prior to its upcoming India launch, we got to ride the new generation Brutale 800 in Varese, northern Italy, the hometown of MV Agusta. Also Read - 2015 MV Agusta Brutale 800 India Review

Not too long ago, the Brutale, like most middleweight motorcycles, was in the 600cc space. In the MV’s case, 675cc. But, the last generation moved up to 800cc. Effectively, the bike you see here is the second generation of the MV Agusta Brutale 800 and was launched in most markets abroad as a 2016 model. This is an all-new motorcycle, with a reworked version of the 798cc, liquid-cooled, inline three-cylinder engine and a revised chassis to better the handling.

Of course, the design has been changed too, though MV has been particular about ensuring the new Brutale 800 is a conscious nod to the older version. The headlamp unit is new, with LED DRLs, though the oval shape clearly is a nod to the older bike. The instrument binnacle is a new unit and looks spiffy, while being very legible. The new fuel tank design is edgier than before, and gets deeper knee recesses. The trellis frame, like most nakeds, sits exposed underneath the fuel tank and is finished in red, which contrasts well with the white colour of our test bike.

The rear subframe is the biggest differentiator from the older bike and is a rather funky looking unit. Without the seat, the subframe looks more like a large pan and the open space just under the rider’s seat is a unique design aspect. The rear numberplate hanger is a side-mounted metal unit, which ensures the tail end looks clean. The pillion grab handle uses a clever design and sits flush with the seat, making it almost invisible. You can move it a couple of inches behind though, by loosening a few bolts under the pillion perch. Triple slashed exhaust pipes end just behind the rider’s footpegs, just like the older bike, and is still a treat for the eyes.

The catalytic convertor underneath is larger than before – I suspect, to meet the stricter Euro IV emission norms – and is a bit of an eyesore on an otherwise gorgeous design. Admittedly, the guys at CRC, San Marino, who are responsible for designing MV Agusta’s motorcycles after Massimo Tamburini, have done an admirable job of ensuring the new Brutale looks as stunning as its predecessors. The bigger highlight, though, is the bike’s compactness, as it looks and feels a lot smaller than before – not just visually, but even when you sit on it.

It gets revised switchgear on the right side of the handlebar, and the engine kill/starter switch is one unit with a unique design. The switchgear also integrates a large switch for changing engine maps, which makes it very convenient to alter riding modes on the go. Paint and fit-finish quality are excellent, which adds to the premium feel.

The 798cc triple has been reworked to meet Euro IV norms and offers 110PS of power produced at a rather high 11,500rpm. That said, the torque output is up to 83Nm and is now produced at 7600rpm, 1000rpm earlier than before. Most of that torque is available below 4000rpm, almost 80 percent of it we’re told, which ensures there’s enough shove at low revs.

The engine sounds like a typical three-cylinder unit with a slightly raw sound at idle but the exhaust note gets sweeter as you pile on revs. Ours was a rather short ride through Varese and the hills that lie outside. Wheelieing through the narrow streets and the light traffic, it became clear that there was plenty of torque on offer for this environment. The engine feels extremely refined, as one would expect of an MV, and is quick to rev and respond to inputs. That said, there was some vibration coming in through the footpegs, though that clearly has more to do with vibration damping rather than the motor itself. On the whole, the bike feels very easy and friendly to ride and we made good use of it to sprint out of town and get into the hills.

Out on open roads it was time to get a sense of the Brutale’s performance. The engine is quick to build revs, and in-gear acceleration is properly riveting. Each time we had to slow down behind traffic on some of the narrow roads, a mere twist of the throttle was enough to overtake swiftly. But, surprisingly, the Brutale wasn’t raw, if anything it masked the sensation of speed quite effectively. There were times when a quick glance at the speedometer told me I was clipping north of 150kmph!

In this mood, using the six-speed transmission was a breeze. It uses hydraulic actuation, slipper clutch and also gets a bi-directional quick shifter. The quickshifter took a few minutes to get used to as even light pressure on the gear lever had the gearbox shift up to the next cog, but once used to it, I barely felt the need to use the clutch lever, be it for shifting up or down.

Magical in the twisties?

Yeah. But… We’ll handle the magical bit first. This MV Agusta’s lightness and agility felt enthralling. Irrespective of speeds, the flickability was very good. Its near-200kg kerb weight might sound like a lot, but it is lighter than the Ducati Monster 821. The riding position is a mix of sporty and comfortable as you sit slightly canted forward with footpegs that are rear-set but not too high. The rider’s seat is a compact space with not too much room to move around, and the seat cushioning is firm.

Changes to the chassis also include a longer swingarm which has increased the wheelbase, apart from the increased trail. The flat handlebar offers good leverage and enables quick directional changes. The compactness and tight packaging of the motorcycle helped greatly in this regards too, and the Brutale 800 felt every bit a streetfighter with its agility.

Now the bit that might make you wince. You see, the crisp handling compromises on ride comfort. The suspension is firm on most roads, but the odd bump or manhole cover made it feel borderline stiff, particularly at the rear. The 43mm upside-down Marzocchi forks at the front are fully adjustable, though the Sachs monoshock at the rear only offers limited adjustment.

The stock settings will feel even stiffer on Indian roads, and our roads will call for a softer default setup. That said, the Euro-spec  setup will feel excellent on a racetrack, and will help you explore the full potential of the engine and the chassis too. The bike feels very friendly and will not scare novice riders, and is sure to reward experienced riders immensely too.

The Brutale 800 gets the latest electronics from MV Agusta’s MVICS (Motor and Vehicle Integrated Control System). The system includes 8 traction control levels, 3 ABS levels and engine braking control too, which makes it one of the most advanced electronics package on a middleweight naked. There are four riding modes on offer, Rain, Normal, Sport and Custom. We didn’t quite get a chance to try various settings given our short ride, though a switch from Normal to Sport instantly made responses from the engine quicker.

Motoroyale has launched the Brutale 800 at a price of Rs 15.59 lakh ex-showroom. At its price the Brutale 800 is certainly an expensive motorcycle. But the brand is always known to command a premium for its products, and hence the India pricing of the Brutale 800 is not surprising. The bigger hiccup at the moment for MV Agusta in India though is its sales network. Currently MV only has three dealerships in India, in Pune, Bangalore and Surat. Plans are undeway to take the total up to 8 by the end of this year though, which should help the exotic Italian motorcycle manufacturer gain further popularity in the country. Plans are also underway to bring in the higher-specced RR version of the Brutale 800 later this year. The Brutale 800 will be appreciated by experienced riders for its compactness, agility and explosive performance, not to mention the stunning design. Power delivery is particularly satiating and adds to the bike’s charm. The bike’s ability to build speeds quickly might just stun you, even as the handling keeps you engaged.

The expected pricing sounds premium, but Giovanni Castiglioni, who owns MV Agusta, confirmed to us that the brand’s focus is now on making super premium motorcycles that are emotive, rather than ramping up production or trying to achieve higher sales numbers. Nonetheless, expect the Brutale 800 to make a strong case for itself as Motoroyale will be assembling the Brutale 800 in India, and that will save a pretty penny as the registration charges for locally assembled motorcycles is lower. Going by the initial impressions from the saddle, MV Agusta’s Brutale 800 promises to be everything you expect from a naked motorcycle but will captivate you with its added helping of excitement and charisma. This Italian diva will tug at your heartstrings, and you’ll love her for it.

Santa Has Brought Us Discounts Of Up To Rs 3 Lakh...