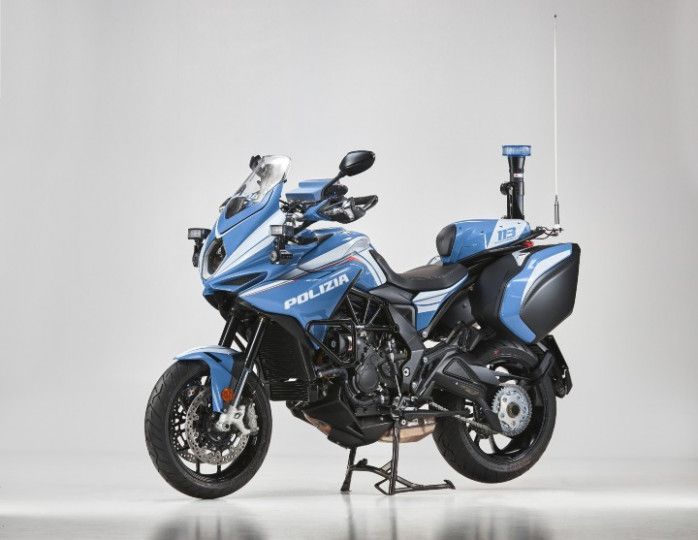 We often hear about how certain countries assign exotic and fast vehicles to their police force for patrolling. And it makes sense because the first responders need to make it on time before things go south. Speeding up things in its home country, MV Agusta has graciously donated four of its Turismo Veloce Lusso SCS bikes to the Milan Police.

Painted in blue and white as per the force’s colour code, these Turismo Veloces have been equipped with some policing gadgets. The bikes get two auxiliary lights at the front, and crash guards that protect the engine as well as its retro-fitted sirens.

They even get a dedicated navigation system mounted right above the stock TFT display.

At the rear, you have colour-coded panniers on both sides offering a total of 60 litres of storage. These storage units likely pack emergency kits, service machine guns and more. The pillion seat has been replaced with a seat cowl, to add more space for the required tools.

Mechanically, the bikes haven’t been tweaked at all. The MV Agusta Turismo Veloce is powered by a liquid-cooled three-cylinder 798cc motor that makes 111PS and 80Nm. It gets a 6-speed gearbox with a bi-directional quickshifter.

The safety net, as well as the underpinnings, are also the same as the standard Turismo Veloce Lusso SCS . The bike is suspended on a 43mm USD semi-active front fork and a Sachs semi-active monoshock. Braking is handled by twin 320mm front discs and a single 220mm rear disc. Dual-channel ABS comes standard.

In Europe, the MV Agusta Turismo Veloce Lusso SCS retails at EUR 21,600 (approximately Rs 19.33 lakh). While you can’t own one of these Turismo Veloces in India since MV Agusta has ceased to operate here, there’s light at the end of the tunnel. Head here and read the story to know what I mean.