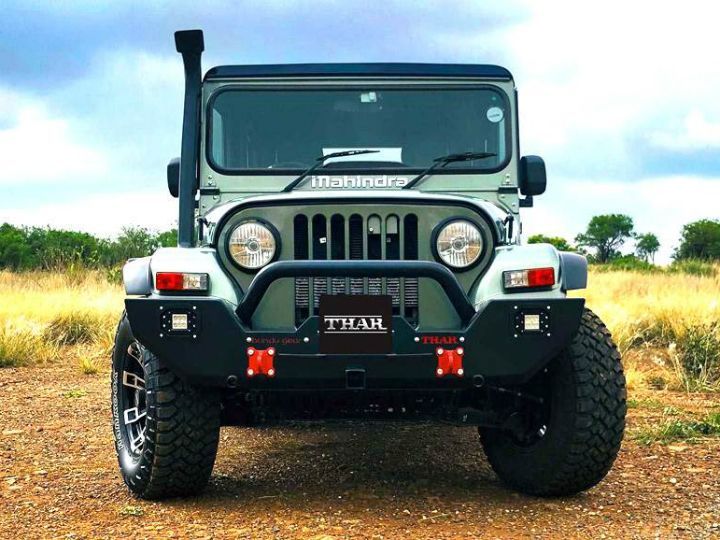 The current iteration of the Thar will soon bid farewell as it doesn’t meet the upcoming safety norms. Until the next-gen Thar hits our roads in 2020, Mahindra will launch a Signature Edition of the SUV called the Thar 700. Limited to 700 units only, this variant will include ABS and will be based on the CRDe variant of the popular off-roader.

To differentiate the Thar 700 from the regular Thar, it will get a host of cosmetic updates. According to our sources, the changes include a set of alloy wheels from the previous-gen Scorpio and a new ‘Aquamarine’ paint option. You can also pick up the Signature Edition in ‘Fiery Black’ colour. The SUV will also feature a ‘Thar 700’ badge bearing Anand Mahindra’s signature on the fender.

On the inside, the Thar 700 gets black leatherette seat covers. Talking about standard equipment, it comes equipped with a three pod instrument cluster with a rev counter, air conditioning with heater and a 12V charging socket. Mahindra has also given a provision to install a 2-DIN infotainment system.

Powering the Thar 700 will be the BS4-compliant 2.5-litre CRDe engine mated to a 5-speed manual transmission. It produces 106PS and 247Nm of torque and will be mated to a Borgwarner transfer case with a provision to shift to four wheel drive low. Mahindra has also equipped the Thar with a mechanical rear differential to help pull itself out of sticky situations.

Mahindra has also started testing the 2020 Thar and it has been spied multiple times. The next-gen SUV will be bigger than the current Thar. It will also include safety features like dual airbags, front seatbelt reminder and rear parking sensors. The 2020 Thar’s body will also be bolstered to make it comply with upcoming safety norms. Powering the 2020 Thar will be Mahindra’s new 2.0-litre BS6-compliant diesel that is expected to produce 142PS and 300Nm of torque. Likely to be mated to a 6-speed manual transmission, the 2020 Thar is expected to get off-road gadgetry like a four-wheel drive transfer case and diff lock to satisfy the needs of off-road enthusiasts. The next-gen Thar is expected to debut at the 2020 Auto Expo.

Considering the fact that The Thar 700 is a limited edition and gets feature updates, it is expected to be priced at a slight premium over the standard SUV, which retails at Rs 9.60 lakh (ex-showroom Delhi). The Thar competes with the Force Gurkha Xtreme variant.