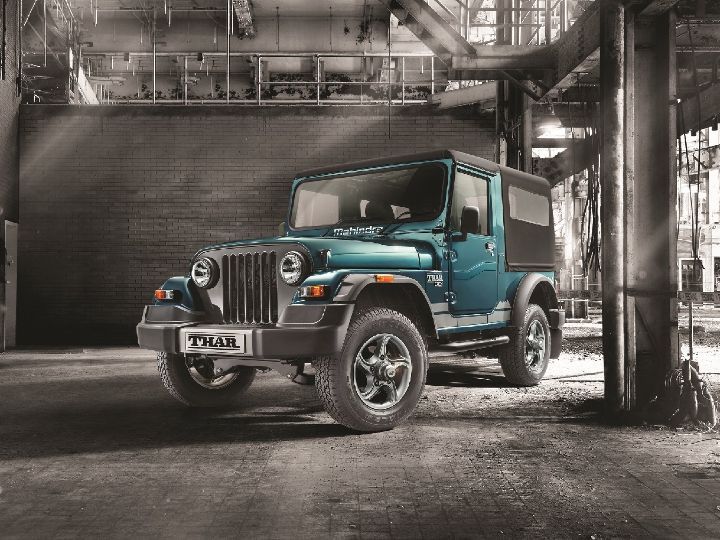 Mahindra has launched a special edition of the Thar called the ‘Thar 700’. It celebrates Mahindra’s 70th year anniversary and is the final edition of the SUV in its current iteration before it’s replaced by the bigger and beefier next-gen Thar sometime next year. As the name suggests, the Thar 700 is limited to 700 units and is the last batch of the current-gen SUV that will roll out from the assembly line. The special edition Thar features plenty of cosmetic updates and ABS to ensure that it stands out from the standard SUV.

The Thar 700 can be picked up in two shades -- ‘Aquamarine’ (Blue) from the Marazzo or the exiting ‘Napoli Black’ shade. The contrasting black grille is limited to the Aquamarine shade and the Thar 700 gets a black bumper with a silver insert in the middle. At the side, the Thar 700 gets new alloy wheels which are a direct lift from the previous-gen Scorpio. Body decals are present at the side and on the bonnet and there is a special ‘Thar 700’ badge on the fenders with Anand Mahindra’s signature embossed in it.

On the inside, the only change to the Thar 700 is a black leatherette seat cover with the ‘THAR’ logo embossed in it. The Thar 700 also gets a three-pod instrument console, manual air conditioner and a 12V charging socket as seen on the standard SUV.

Powering the Thar 700 is a 2.5-litre CRDe motor which puts out 107PS of power and 247Nm of torque. It comes mated to a 5-speed manual transmission. It also gets a Borg Warner transfer case and rear diff locks to make the most of your adventure trip. Meanwhile, the Di variant of the Thar has been axed and is no longer on sale.

While this is the last batch of the current-gen Thar, Mahindra is hard at work to launch the next-gen Thar, which has been spied multiple times and will be bigger than the current-gen SUV. The 2020 Thar is expected to be powered by a brand new 2.0-litre diesel engine that will be BS6-compliant and is expected to make around 140PS of power and 300Nm of torque. It will also be underpinned by a new platform, which will be shared with the upcoming Scorpio, and will be beefed up to meet the upcoming crash test and safety norms. The next-gen Thar is expected to debut at the 2020 Auto Expo.