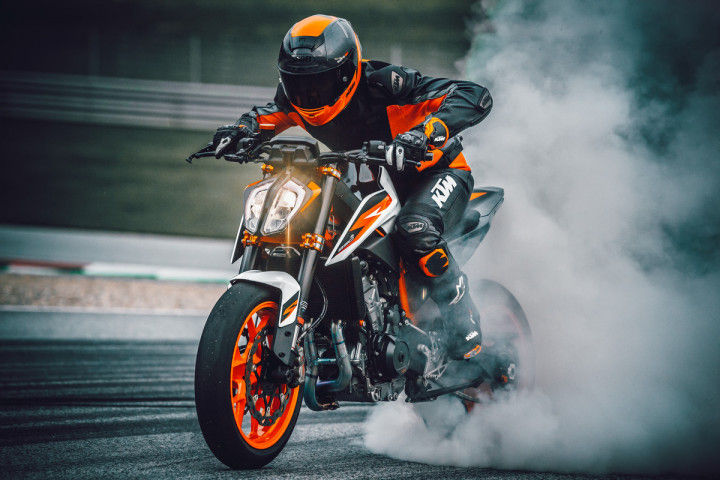 KTM wowed the world with the unveiling of the 890 Duke R at the 2019 EICMA show. But at the time, there were barely any specs apart from the crucial numbers. KTM recently revealed all the detailed specifications of the motorcycle. Take a look:

Gets a bigger, more powerful heart:

The KTM 890 Duke R’s engine is based on the 790 Duke but the barons at KTM have tinkered with it so much that it is practically new. Since there’s no replacement for displacement, KTM has increased the bore and stroke from 88mm x 65.7mm to 90.7mm x 68.8mm, effectively increasing the cubic capacity from 799cc to 890cc.

From an engineering perspective, there’s a lot more that can be done to complement the increase in displacement so that an optimal amount of power and torque can be extracted from the engine. So, KTM has employed new connecting rods and new forged pistons which are 10g lighter despite being larger. KTM has also increased the compression ratio for better combustion efficiency. This along with the more aggressive camshaft profile providing increased lift help the engine rev even higher than before.

The Austrian bikemaker says it has equipped the motorcycle with a new crankshaft that offers 20 per cent more rotating mass. As per the brand, it helps in offering better stability in terms of engine character and also plays an important role in cornering without sacrificing the agility of the motorcycle.

For razor-sharp throttle response, KTM has employed a short intake funnel and new throttle bodies that can be tweaked individually for greater precision and versatility. Of course, all these changes warrant the need for better cooling efficiency and for this, the brand has plonked in a larger radiator too.

With all these changes, the peak power has gone up from 104.6PS to 121PS and the torque from 87Nm to 99Nm. The engine works alongside a 6-speed transmission with a short throw shift lever to ensure quicker gear shifts compared to the 790 Duke. It comes with a standard slipper clutch and an optional bidirectional quickshifter for even faster clutchless up/downshifts.

The KTM 890 Duke R’s powerplant is reined in by four riding modes: Sport, Street, Rain and Track (optional). The Track mode enables launch control and you can switch the anti-wheelie control on or off too. Here the engine brake control is disabled for greater precision. This mode works in conjunction with 9-levels of lean-angle-sensitive traction control system. For more proficient riders, the motorcycle also features a Supermoto ABS mode, which disables the rear-wheel ABS for some slideways fun. For better intuitiveness, the motorcycle also packs an info-laden full-colour TFT instrument cluster.

The KTM 790 Duke has quite capable underpinnings but it lacked sophistication and versatility. So, in the KTM 890 Duke R, the brand has used a proper 43mm WP Apex split function fork that is adjustable for rebound and compression. The rear employs a WP Apex monoshock that offers preload, high and low-speed compression, and rebound adjustment.

For better braking prowess, it gets 20mm larger front discs over the 790 Duke (320mm) grabbed by the more upmarket Brembo Stylema monoblock calipers. This setup is a whopping 1.2kg lighter than the 790, which means less unsprung mass at the front and quicker steering. Rounding off the handling package is a set of grippy Michelin Powercup II hypersport tires.

The handlebars have been moved forward and are lowered to provide greater front-end feedback. To suit a wider set of riders, the handlebars get 4-position adjustability on the triple clamp. The footpegs are placed higher and are more rear-set for a more aggressive overall stance. This setup also results in greater cornering clearance. The motorcycle gets a passenger seat cover with a small cushioning to support the rider’s back. Unfortunately, in pursuit of performance, the seat is 15mm higher than the 790 Duke, at 840mm. Despite packing a bigger engine, the bike is, in fact, 3kg lighter than the 790 Duke, tipping the scales at 166kg dry! That’s an incredible achievement if you ask us.

More bang for the buck:

The KTM 890 Duke R is priced at USD 11,699 (approx Rs 8.94 lakh) in the US. That’s just USD 1,000 more than the 790! At such a small premium, the 890 Duke R offers significantly bumped up performance, adjustability and electronics. That makes it great value, but only if you want a more aggressive bike than the 790 Duke.

If you’re wondering about its price in India, it is likely to cost around Rs 10.5 lakh, considering the BS6 790 Duke is expected to hit the 9 lakh-rupee mark. Even then, it will undercut the newly launched and well-priced 2020 Triumph Street Triple RS.