New spy shots of the 990 Duke suggest that KTM’s new naked has got some significant updates, both mechanical and cosmetic 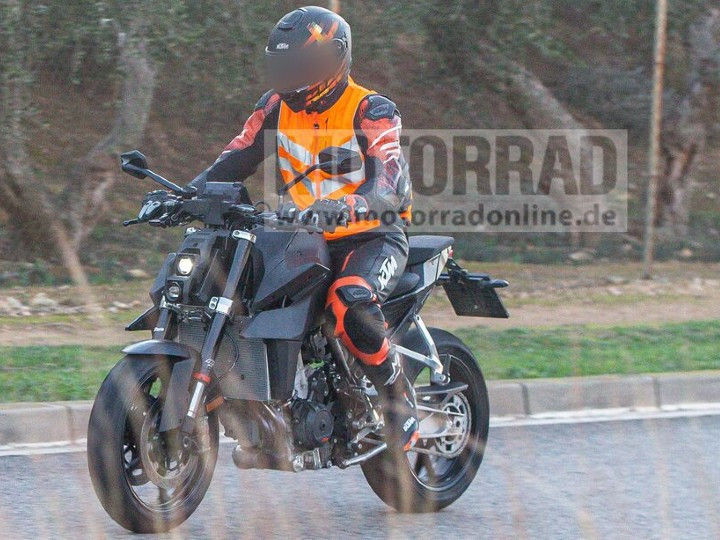 A new set of spy shots of the KTM 990 Duke have surfaced on the internet, and this time, the bike seems to be in the next stage of testing. This test mule flaunted new bodywork, unlike the last time when it was the same as the 890 Duke.

The new KTM 990 Duke packs an all-new parallel-twin engine, unlike the 890 Duke, which used a bored-out unit from the 790 Duke. Everything has been completely redesigned, from the clutch casing to the engine head. There’s a new, bigger radiator too. We expect the new engine to belt out 25PS to 30PS more than the 890 Duke that produces 121PS and 92Nm.

KTM seems to have updated the chassis to go along with the more powerful engine. Not only does the frame seem wider to accommodate the new engine, but the swingarm has also been redesigned, and it appears much smaller than the 890 Duke. Furthermore, the front suspension has been updated with a fully adjustable unit from WP. Even the braking hardware seems to have been upgraded to Brembo Stylema units. We expect the Austrian marque to overhaul the bike’s electronic suite too.

Now, to the design. The KTM 990 Duke’s test mule packs a vertically stacked dual-LED headlight setup a la the 2021 Suzuki GSX-S1000. However, we expect the production model to have some bodywork around it, making it a modern-day rendition of the older model of the 990 Duke.

Other bits like the tank extensions or the tail section are unlike the previous-gen 990. So, instead of the underseat exhaust of the OG Duke, the new model features a side-slung unit.

Though this test mule featured new bodywork and appeared closer to production, it is unlikely that the KTM 990 Duke will make it to the streets anytime before 2024. However, what the Austrian marque could bring this year is the all-new 390 Duke followed by the road-legal KTM RC8 C early next year.