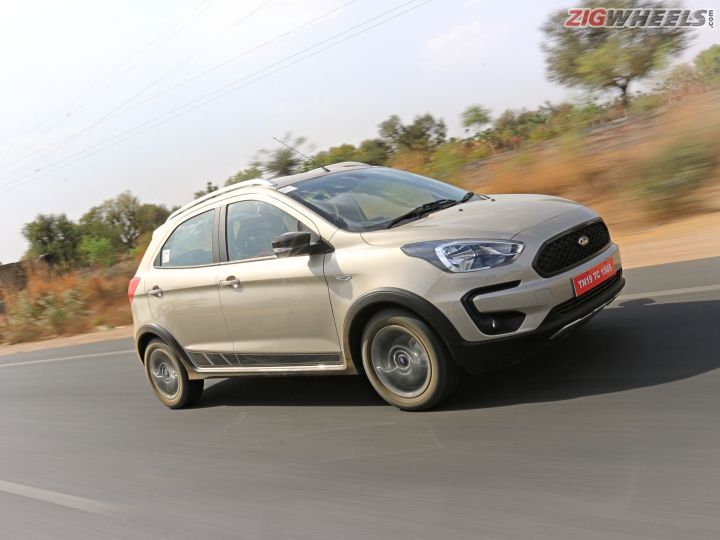 Ford has confirmed that it will launch the new Freestyle crossover on April 26, 2018. The Figo-based crossover hopes to take on other such cars like the Honda WR-V and the Hyundai i20 Active and slot in below SUV-like crossovers like the Maruti Suzuki Vitara Brezza and the Ford EcoSport.

The Freestyle gets typical faux-crossover design cues - the lower body cladding, roof rails, blacked-out elements and others - but has more ground clearance than its hatchback sibling. The ground clearance of 190mm, a 30mm wider track than the stock Figo and the visual bulkiness give the Freestyle a distinct SUV-like look.

Inside, the Freestyle is similar to the standard Figo hatchback but with new features. On the top-of-the-line variants, it gets dual-tone brown/black upholstery and fabric seats. The standout features include the addition of a 6.5-inch touchscreen infotainment system with smartphone connectivity, push-button start, automatic headlamps and rain-sensing wipers.

As with the Figo and the Aspire, the Freestyle also gets many first-in-segment safety features like active rollover prevention, hill launch assist, traction control, electronic stability program, 6 airbags and the unique emergency assist facility.

The Freestyle will be available with two engine options - an all-new 1.2-litre, 3-cylinder, naturally aspirated ‘Dragon’ petrol engine and a 1.5-litre, 4-cylinder, turbocharged diesel engine. For now, only a 5-speed manual transmission is being offered. Ford will be offering the Freestyle in four variants - Ambiente, Trend, Titanium and Titanium+.

The Ford Freestyle is expected to undercut the competition and slot in between the Figo and the EcoSport, with prices in the range of Rs 6 to 9 lakh. Stay tuned to ZigWheels for the latest on the Ford Freestyle launch on April 26.