The recipe isn’t all new, sure. But has Ford served up brilliance, or is it just another case of too much masala? 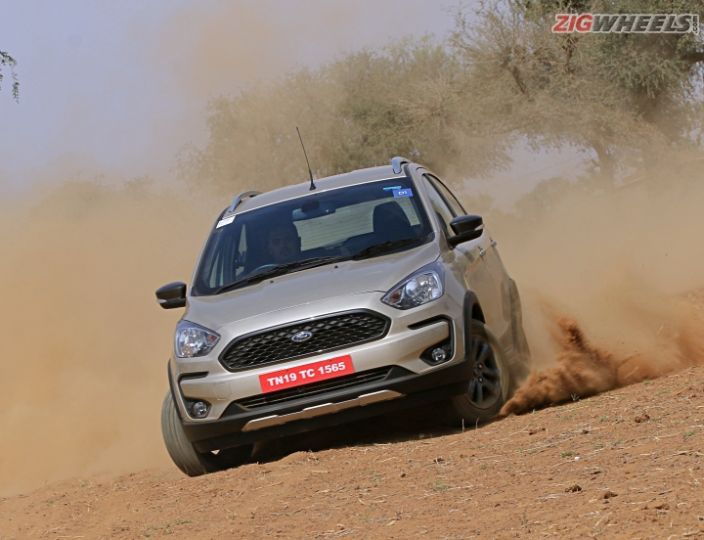 There simply hasn’t been a middle ground between folks who are adamant about cross-hatches being “nothing more than small cars with cladding”, and the ones who’ve loved them for the added ground clearance and the dash of SUV flavour. The Ford Freestyle might just fix things, though. On paper, it promises to have the correct ingredients and the right amount of distinction. How does this come into play out in the real world, then? Time to dig in, and find out.

How To Train Your Dragon

Ford’s decision of ditching a smooth-revving 4-cylinder engine for a 3-pot in the EcoSport raised quite a few eyebrows. But, the apprehensions were quickly laid to rest with the turn of the key. The 1.5-litre engine is nice and quiet at idle and just hums as the revs build. Naturally, expectations from the smaller cousin are equally high. Does it deliver?

The basic architecture and the block of the engine remain the same as the bigger 1.5-litre engine. The lower displacement is courtesy of a reduced bore and stroke. Also, Ford says because of the small displacement, the engine doesn’t really require a balancer shaft. Does this mean it’s got a bucketful of vibrations?

Press the start-stop button and the 3-cylinder motor sputters to life as you’d expect it to. But, it settles into a smooth idle in no time. There’s none of that lumpy, inconsistent idling. Typical of a three-pot, the motor is audible from both inside and outside the car. The insulation under the bonnet does cut out a bit of noise, but doesn’t manage to mask it completely. Rev the motor past 3000rpm, and the throaty engine note really makes itself heard. But, the note isn’t gruff. In fact, it’s likeable. More so, because the Freestyle can be fun to drive.

The naturally aspirated, 1.2-litre, 3-cylinder engine might seem puny on the brochure. But, it’s got quite a lot of oomph. With 96PS of power and 120Nm of torque, the Freestyle is setting new benchmarks in its segment. And, those numbers are tempting enough for us to ask - does Ford finally have a fun-to-drive petrol in its range again?

Well, not outright fun. But fun in its own manner. See, small engine, big power means one thing - the power is at the top of the rev range. Because, physics! So, naturally, you have to push the engine hard if you want to drive spiritedly. Here’s the fun bit - the Freestyle is more than happy to play ball. The engine revs up quickly, and the new Getrag-sourced 5-speed manual gearbox just adds to the experience. Shifts are light, quick and sure-slotting. The combo makes you want to grab the Freestyle by the scruff of its neck and wring it ALL THE TIME!

There are no spikes in the power delivery, just one consistent tug towards the 6800rpm redline. Like we said, it sounds a bit naughty too. Once up at triple-digit speeds, the Freestyle has no problems maintaining the pace. In fifth, you can drop down to under 40kmph and then pull back up to highway speeds without a hiccup. And that tells us just how versatile the motor is.

Even when you slow things down, it doesn’t feel drab and dreary. It’s properly usable on a day-to-day basis. Ambling about inside the city at a sedate pace is no problem at all. The new gearbox doesn’t mind being in low speeds at higher gears. For instance, we went over a few speed breakers at speeds lower than 20kmph, in third. The motor didn’t knock or protest one bit. Put your foot hard down at this point, and the Freestyle pulls clean. Yes, in this scenario, progress is boringly slow, but it’s progress nonetheless. Again, none of that knocking or whining from the engine. Then there's the fact that the steering and the clutch require no effort to use. Clearly, the Freestyle isn't something that will tire you out in a bumper-to-bumper commute.

Raising the ride height of a vehicle comes with its sets of issues, the most basic of which is a bucketful of body roll. And while the Freestyle’s ride height is a full 16mm higher compared to the standard hatchback, it has been tinkered with to ensure it doesn’t feel floaty The springs and the anti-roll bar have been stiffened up, and the track is 30mm wider compared to the standard Figo as well. That’s Ford being Ford. Driver first!

The Freestyle does feel a notch more planted at highway speeds, compared to the Figo. And, when it comes to the rough stuff, it’s happy to take it on as well. At 190mm, the ground clearance is just 10mm shy of its elder sibling - the EcoSport. So, yes. You can take it on a stroll in the not so car-friendly countryside and come out smiling. That’s mostly because it doesn’t rock you about side to side, or feel bouncy at low speeds. Even over rocky patches of road, it managed to keep the cabin steady. Crossing sharper bumps, you hear the thudding more than you actually feel them. On everyday roads, it should feel right at home.

But, that’s not the case with the rear end. Our photographers complained that it felt a tad bouncy at the rear. That’s something to bear in mind in case you’re looking at the Freestyle as a road trip companion for the family.

The roads leading out of Jaipur are an endless series of straights. While we didn’t get to properly chuck the car into winding roads, we did encounter a whole lot of long sweeping corners. The electric power steering is accurate, and it doesn’t really require any second guessing or frequent line corrections. You feel it building some weight as the speeds climb, but it can’t shrug off that hint of disconnect from the front wheels, especially while tracking straight. Yes, the steering doesn’t talk to you as it did in old Fords, but this setup shouldn’t disappoint the enthusiast in you either.

So, does it deliver the signature Ford driving experience? In its own sweet way, it does. The engine loves being pushed, and that gearbox is the perfect accomplice.

...and finally, there’s the way it looks. There are a host of changes that give the Freestyle that unique, rugged persona it needs. This includes the tough-looking cladding, the faux matte-silver bash plates, and the stickering that runs along the side. It’s got a set of roof rails too, and here’s a pleasant surprise - it’s actually functional. It will support upto 50kg of weight, and for some added versatility, you can choose roof cross bars as an option too.

Other minor tweaks include a smoked headlamp, more prominent creases on the bonnet, and revised detailing for the tail lamp. Ford’s signature grille ditches the horizontal chrome slats for a mesh-like pattern that looks sharp in gloss black. Rounding things off are bigger 15-inch alloy wheels wrapped in 185/65 section rubber.

As far as looks are concerned, the Freestyle has the outdoor vibe it needs. On the inside…

...things aren’t all that different

Except for the big screen on the dash, that is. Let’s tackle that first. All variants of the Freestyle, save for the base-spec Ambiente, get a 6.5-inch touchscreen. But, it’s only the top-spec Titanium+ variant that features Android Auto, Apple CarPlay and Ford’s SYNC 3 tech. The redesigned dash looks significantly more modern compared to the cluttered dash of the regular Figo. There’s an added USB port next to the 12V socket, and that tiny shelf on the dash continues to be as useful as ever.

The brown-black dual-tone theme is limited to the Titanium+ variant as well. This colour scheme, we believe, will draw mixed opinions. But there’s no denying it infuses a dose of youthfulness into the cabin. The fabric upholstery on the seats gets coordinated colours as well and manages to tie things up neatly. Other feature additions include a start-stop button, an updated MID, auto-dimming rear view mirror, automatic headlamps and rain-sensing wipers.

With the Freestyle, we were hoping Ford would address some pain points of the Figo. The quality of plastics, for starters, feels similarly scratchy. The instrument cluster is still that drab-looking three-pod unit, which just feels out of place in a modern-day car. There’s no difference in the space department either, so it continues to be strictly average. Finally, there still isn’t any storage space on the rear doors. To deliver that premium experience, Ford could’ve thrown in a centre armrest, or that leather-wrapped steering wheel from the Figo S. That’s been skipped as well.

What’s thankfully standard, is safety. Dual airbags and anti-lock brakes are standard across the range. The top-spec Titanium+ variant adds side and curtain airbags as well. There’s some more tech in the form of traction control, electronic stability control and hill launch assist. There’s Active Rollover Prevention as well, that cuts off power from individual wheels to prevent the car from, well, rolling over.

So, in case you feel a bit low about Ford skipping features like daytime running lamps or snazzy looking projectors - remember that this is what you’re paying for. Safety tech is always better than a pair of silly lights, isn’t it?

The One To Buy?

Should you buy the Freestyle instead of the Figo? The answer to that, to put it simply, is yes. The Figo is beginning to show its age. The Freestyle does address that issue to a fair extent by adding some zing as well as practicality. The new petrol motor is happy when your right foot is heavy, and the gearbox is slick and smooth too. The added ground clearance is a welcome addition as well, and that ride quality is just right for everyday use. Yes, the interior quality could’ve been better, and it isn’t any better in the space department either. The real big miss in our books is the lack of an automatic variant. Whether that comes back to haunt Ford is something we’ll have to wait and see.

With prices starting at Rs 5.09 lakh, and topping out at Rs 7.89 lakh the Freestyle is phenomenal value for money. It's definitely money well spent in our books.