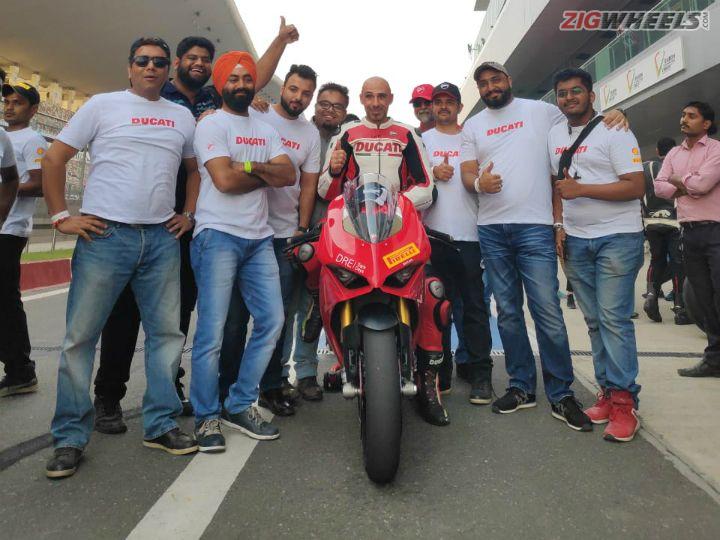 Ducati’s flagship superbike, the Panigale V4 S, has just broken the track record for production motorcycles at India’s only F1 track, the Buddh International Circuit (BIC) during the Ducati Riding Experience (DRE) session happening there. Ducati’s test pilot Alessandro Valia broke the lap record which was earlier held by a track-spec Yamaha R1. But Alessandro reckoned he could do better and continued to push the limits of the bike. However, his crazy lean angles caused the gear lever to bend inwards and was forced to pit before the end of the second lap. (Read our first ride review of the Ducati Panigale V4 S here).

On his second outing, he dropped his lap times by close to a second and set up a blistering time of 1.56.316, which is just a whisker shy of the lap record set by Anthony West astride an ARRC race-spec Yamaha R6 equipped with a race engine, tricked out suspension and brakes.

To put things into perspective, the track record for production cars is currently held by the Mercedes-AMG GT R, which set a lap time of 2.09.853 just over a year ago. The fastest lap record for a car at BIC is held by Gautam Singhania, who set a lap time of 1min 59sec in his Ferrari 458 Challenge race car. (Also read Ferrari 458 Italia: First Drive).

In comparison, the Ducati Panigale V4 S was a bone stock bike with the exception of slick tyres. The bike was set to ‘Race’ rider mode with the semi-active electronic suspension set to ‘Dynamic’, which controls the Ohlins NIX30 43mm front forks and Ohlins TTX36 rear monoshock electronically with inputs from a Smart EC 2.0 module. The bike also featured new Brembo Stylema brakes, which are a cut above the top spec Brembo M50 monoblocs we so love.

There’s no doubt the 214PS from the 1103cc V4 engine that powers the featherweight 175kg bike also helped in achieving the feat. The best bit is that the lap record was set by a bike that you can buy from your local Ducati dealership, provided you have around Rs 25.29 lakh (ex-showroom India) to spare. We were at the BIC in Greater Noida to witness the action first hand and also train under the record breaker himself. Stay tuned to read our report on the Ducati Riding Experience (DRE).