While we’ve come a long way in safety standards, there’s still some way to go 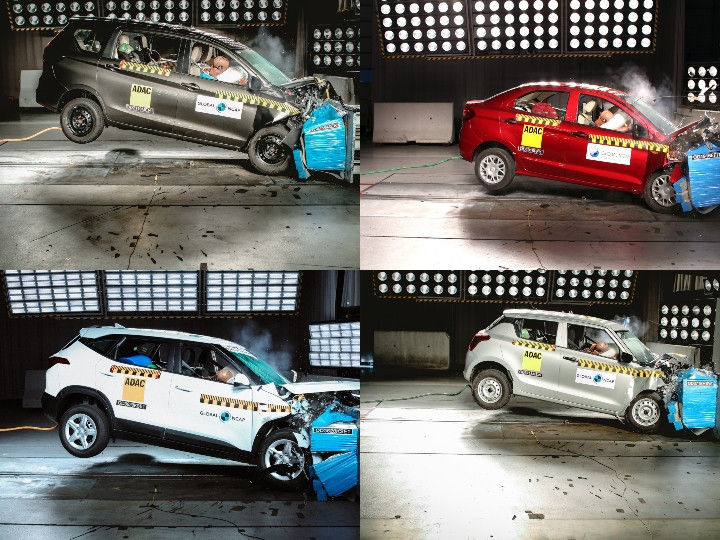 For a while now, safety standards have been getting a lot stricter for the automotive industry. As a result, we’re finally seeing the safety ratings of Indian cars getting closer to international standards. While we have come a long way in the past couple of years, there’s still a lot of work to be done considering plenty of cars with a Global New Car Assessment Programme (GNCAP) safety rating of 3 stars or lower are on sale in India.

Before we get to the list of India-make cars with a score of 3 stars or lower, here are the terms used to depict safety ratings: Good, Adequate, Marginal, Weak, And Poor

Kicking off the list is the Maruti Suzuki Ertiga MPV with a 3-star safety rating. It scored 9.25 out of 17 in adult occupant protection and 25.16 out of 49 in child protection. Overall, a pretty average safety rating with the bodyshell being rated unstable and unable to withstand further loadings than the standard crash test speed of 64kmph.

Next up is the Ford Aspire that actually scored better than the Ertiga in adult occupant protection, with 10.49 out of 17. But it loses out in child protection, scoring 14.22 out of 49. Some clear misses for the Aspire include seatbelt pretensioners and ISOFIX mounts. It has an unstable bodyshell.

A recent addition to the made-in-India cars that underwent the Global NCAP crash tests and scored a surprisingly average safety rating. Despite being loaded with modern features, it was disappointing to have its body shell rated unstable.

It just about managed to get a 3-star rating with a lowly 8.03 out of 17 in adult protection, with just about average head protection for both the front occupants. Its child protection rating was also pretty low with a score 15 out of 49 points as the Seltos didn’t come with a rear centre three-point seatbelt.

One of Maruti’s best selling hatchbacks in India, the Swift, scored a lowly 7.08 out of 17 in adult protection and 16.23 out of 49 in child protection. The driver's chest and knee protection were weak, with poor head and chest protection for the child. It also didn’t come with a rear centre 3-point seatbelt.

Another recent addition to the list with a pretty mediocre safety rating. It scored 7.05 out of 17.00 in adult occupant protection and 15.00 out of 49.00 in child occupant protection, which is a two-star rating overall. There were some clear misses such as three-point seat belts in all positions, lack of ISOFIX anchorages and no child restraint system, which played a notable role in this low safety rating.

Another Maruti model joining the lower half of safe cars in the country.  It scored 6.93 out of 17.00 in adult occupant protection and 16.33 out of 49.00 in child occupant protection which is marginally a better score than the Swift. While driver and passenger head protection was good, it lost out in chest and knee protection. It also doesn’t get a 3-point rear centre seatbelt and ISOFIX mounts.

The revival of the Santro name doesn’t mean it is up to the mark in safety standards just yet.  Garnering 6.74 out of 17.00 in adult occupant protection and 15 out of 49.00 in child occupant protection, it's pretty close to the WagonR. That said, its child restraint systems were not recommendable and it does not offer ISOFIX mounts or a 3-point rear centre seatbelt.

Now we really start to head towards the bottom of the barrel, starting with the Eeco MPV. To be fair, it's not really a surprise as it is quite bareboned and had no airbags when we tested it. But keep in mind that it now comes with a driver airbag as standard. It scored 1.13 out of 17.00 in adult occupant protection and 24 out of 49.00 in child occupant protection.

And finally, we head towards the worst-rated India-make car in Global NCAP. And it's a fairly recent model too. It scored a big fat zero in adult protection and 13.84 out of 49.00 in child occupant protection. Despite having a single airbag as standard, critical areas like the neck and chest provided poor protection for adults. It also misses out on three-point rear centre seatbelt and ISOFIX mounts.

Overall, there’s a lot of work to be done for Indian-make cars to match the safety standards of its international counterparts. But with Tata and Mahindra leading the way, we should expect the trend to pick up for other carmakers soon.