How does Bavaria’s latest challenger stack up against its naked rivals? 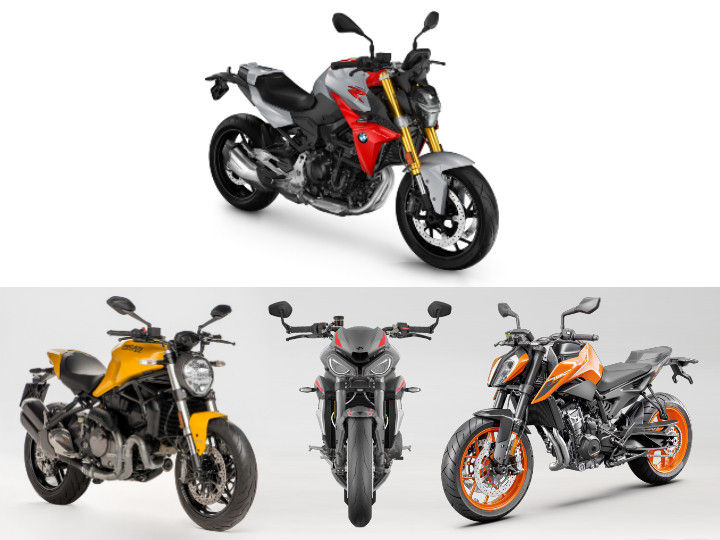 It has been almost a decade since BMW last made a middleweight naked motorcycle. The F 800 R wasn’t able to match up to the likes of the Triumph Street Triples, Ducati Monsters and the KTM Dukes. Now though, BMW has built the F 900 R, a naked motorcycle based on its parallel-twin engine platform, to take on its European rivals. The rivals themselves have seen a lot of change in recent times. Triumph upped the displacement on the Triple from 675cc to 765cc, Ducati did the same with the Monster 821 and KTM built its first parallel-twin naked: the 790 Duke. Thank our lucky stars that all four of these bikes are available in India (a few with their BS6 updates still pending, sadly) and we enthusiasts are spoilt for choice. But which is the right choice?

For this comparison, we have picked the Street Triple R as it will be the new base trim for India and closer in terms of performance and hardware on offer, compared to the other bikes on this list.

The Street Triple R displaces the fewest cubes in this group but thanks to an additional cylinder and a racy tune, it is the most powerful one of the lot. It does lag fairly behind in the torque department, the Beemer taking top honours there. More importantly, the F 900 R produces its peak torque significantly earlier than the rest, which should make it a great bike to zip around within city limits. Hopefully, the engine tune on the F 900 R is better than the F 750 GS, which seriously lacked bottom end grunt.

Each one of these bikes has ride-by-wire, multiple riding modes, traction control and ABS, but only the BMW and KTM offerings have their electronics aided by a six-axis IMU for smoother intervention.

There is no disputing which bike takes the cake in this department, the Triumph Street Triple R is a couple of steps ahead when it comes to the hardware in question. Its aluminium twin spar chassis is regarded as the best in its class. Plus, it is the only bike on the list to offer fully-adjustable Showa suspension units.

In terms of suspension, the F 900 R and the Monster 821 are almost equally matched, the Beemer eking out a narrow advantage as its monoshock unit has rebound adjustability too. BMW has not brought the Pro version of the F 900 R, which would have helped its cause a bit in this comparo as it would be the only bike in the segment to get an electronically-adjustable monoshock, to India.

One area where the 790 Duke fails to impress is its components, or rather the lack of sophisticated components. The suspension units are fairly simple; the braking hardware, even though it comprises of radial monobloc calipers, isn’t from a fancy Italian brand and the tyres are sport-touring oriented.

The other three bikes are on par when it comes to the braking setup and the tyres offered. We are still to know the tyre selection that BMW Motorrad India goes with for the F 900 R. The foreign-spec model gets either Bridgestone Battlax or Michelin Power RS rubber, both of which are as capable as the Pirelli Diablo Rosso 3s.

It is quite neck and neck in this department. The Ducati Monster 821 has the most accommodating seat with adjustable seat height. Even in its highest setting, the rider sits 5mm lower than the next competitor. It isn’t the lightest bike here, top honours going to the Street Triple R. The Triumph also has the shortest wheelbase and the largest fuel tank amongst these. Not only does that boost its sporty character but also its touring credentials.

On paper, the F 900 R seems to be the laziest and heaviest of them all. It also manages to store the least amount of fuel on board. Its intentions might not be to dazzle you with agile handling but rather offer a mature riding experience, something that larger audiences would find rather welcoming.

If you are going to shell out the moolah for one of these bikes, you’d definitely expect some features that might not affect the riding experience by much but will definitely alter the ownership experience. The F 900 R and the 790 Duke are feature-packed in this regard, both offering large colour TFT screens equipped with smartphone connectivity and the works. The unit on the Beemer is a lot more exhaustive, allowing you proper navigation with a map view, and also connects to your helmet bluetooth intercom unit (like Sena or Cardo Scala).

The Monster 821 does have a colour screen but it doesn’t get the Ducati Multimedia System module, you have to get it as an accessory fitment. The bi-directional quickshifter and LED turn indicators are also accessories. In order to get all three, you will need to spend almost Rs 73,000 extra.

While Triumph used to offer the colour TFT dash on the Triple R earlier, the current model skimps out on it.

On the whole, the Triumph Street Triple R does emerge as the sportiest package of the lot. It is the most powerful, gets high-end components and has a sporty setup. It might not have the modern features of the BMW or the KTM, which is a shame as those features were available on the older model. But if Triumph does manage to price the bike at around Rs 9.50 lakh, it surely has a winner on its hands.

Even though we felt that KTM overpriced the 790 Duke, its BS4 model was the most affordable of the lot. And we think the story will remain the same for the BS6 bike. It doesn’t boast of sophisticated hardware. If you want a bike for hooning around on, you would be very happy with the 790 Duke.

On paper, the BMW F 900 R does make a lot of sense for those who are stepping up from a 650cc motorcycle but do not want something that will scare them off easily. The F 900 R is the most affordable big Beemer available in India and you will surely appreciate the gizmos and features that come as standard.

Ducati literally started the segment decades ago with the Monster, but the Monster 821 does seem a tad dated in this company. We guess a minor revision is in order for the middleweight Monster as it has been two years since Ducati first introduced the 821. It misses out on the latest generation Ducati electronics suite and other fancy bits. The high asking price of the BS4 bike doesn’t do it any favours either.